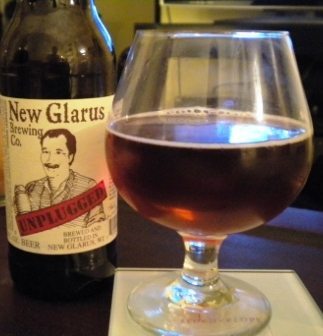 “A complex and intriguing original. The mystery began with wild yeast spontaneously fermenting a rich treasure of malted barley and cherries. Unlined Oak casks breathe deep vanilla hues and chords of smoke into this sour brown ale. Our Master Brewer has forged a smooth garnet tapestry that defies description. Wander off the beaten path.”

Karl: Over recent beers at Sheffield’s, I noted the following:  “Some brewers brew heavy, some brewers brew light.”  We were talking about Dark Horse, who I would say is a Heavy Brewery, and then I brought up New Glarus as an example of a Light Brewery.  Everything they do has a specific lightness to it, a lack of heft, an airy quality.  Even their stout is light-bodied.  Well, there’s an exception to every rule, and New Glarus’ Enigma comes closest to being that exception.

While certainly no Russian Imperial in body, the Enigma is the heaviest NG I’ve stumbled across yet.  It’s deliciously tangy and sour – even slightly apple-esque – without overdoing it into the extreme-pucker range, and the sparkliest sour brown ale I can recall.  It’s complex, rich and bright and another winner from New Glarus.

I know it seems like we drool all over everything that NG touches, influences, looks at and thinks about.  I swear I’m going to pick up a 6’er of Stone Soup or something that never blew my mind just to offset all the NG love around here one of these days.  Until then though…yeah, Enigma is another of the greats.  Get it.

Ryan: Yeah, maybe we do drool over a lot of what New Glarus does but I’ll be damned if they don’t consistently hit the nail on the head with their Unplugged series.  I’m not going to lie, I have never really been blown away by their year-round and seasonal offerings.  But the Unplugged beers are simply in a class by themselves.  And, yes, this offering is no exception.

Engima pours dark, nearly mahogany in color, but somewhat translucent with purple hues along the edges.  The smell is a blend of cherries, vanilla and some subtle tartness.   Cherries dominate the forefront of this beer followed by the vanilla and a touch of smokiness.  The tartness follows in the back-half.  It’s sparkling and crisp and dances across your palate.  No, wait, it break dances across your palate.

This is a real winner from New Glarus and another outstanding Unplugged offering.  It’s tart, but not too tart, and the vanilla and smoke make it more than a one note beer.  If you look hard enough you can still find this.  Do it.  Get it.  Drink it. 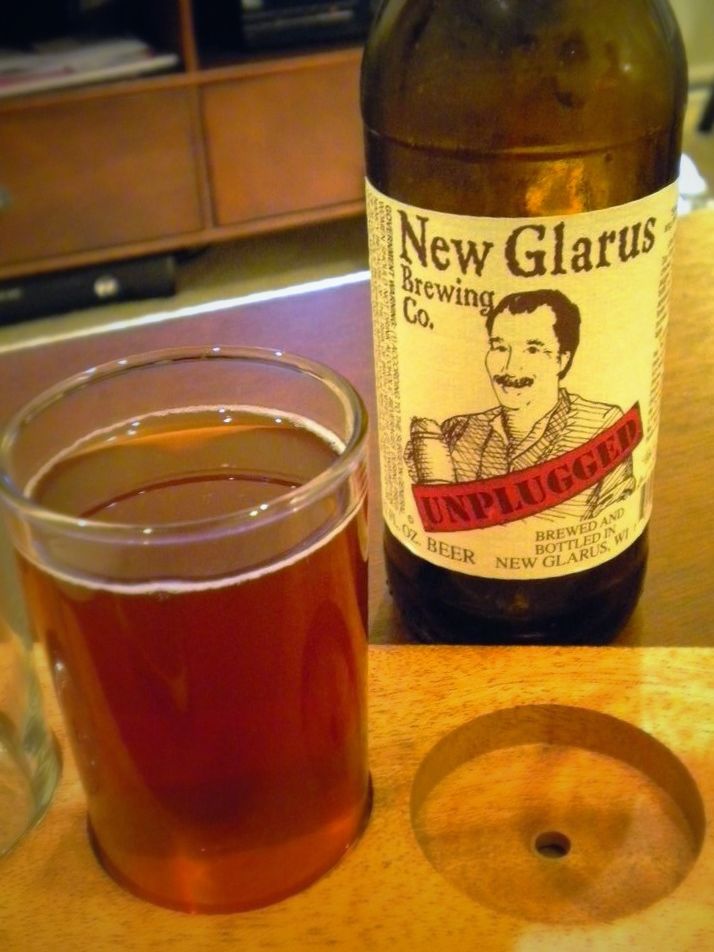 KARL: The original Enigma was a fun one – I was just easing into being literate on sour beers, and this one was sour, tart and complex at the outset. After a year of age, the Enigma has graduated to “funky.” Smelling of Cherry Cola with a hint of vinegar, the taste was just a touch sour but nothing like the previous year’s. Tasting of apple cider spiked with cider vinegar, this aging experiment was a bust. Sometimes you win, sometimes you lose. It was worth a shot, tho – because now we know.

ANDREW: While Karl wasn’t a huge fan of the aged Enigma, I, on the other hand, loved it. It might have something to do with the fact that I didn’t try a fresh Enigma, but I really liked what the beer had become.

The nose was full of cherries, vanilla and an oaky nuttiness. The flavor profile was complex as hell, tons of sour dark fruits at the onset, then quickly giving way to vanilla and oak. The strong vanilla on the back end of this beer reminded me of crepes, oddly enough. Good beer – wish I could try it fresh, though.

RYAN: I am with Andrew on this one. I really enjoyed the Enigma. Sure, it had faded a bit with that year in the cellar but – frankly – I think it faded in to a very smooth and drinkable sour.

The elements of wood, cherry and vanilla in the nose reminded me of a Yankee Candle.

I did pick up the hint of vinegar that Karl noted as well as some general tartness with a pop of vanilla in the finish; which was rather dry. The tartness wasn’t puckering but it was still present and accounted for. While I didn’t take a lot of notes on this beer I think my last sentence sums it up nicely:

“This beer has reached awesome. If you have it, drink it.”

From The Cellar: New Glarus Unplugged Enigma was last modified: August 26th, 2021 by The Guys