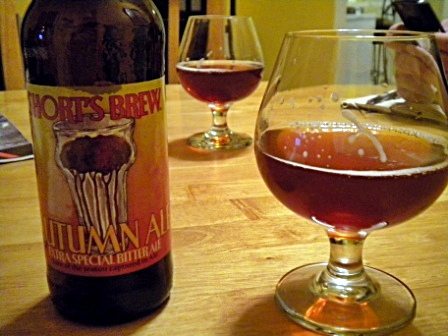 “Our London ESB is true to style. With a medium amber color and a perfect balance of initial malty sweetness fused with soft fruity esters. The finish lingers with hop characteristics including strong flavor, pleasant aroma and a medium bitterness. A user friendly delight for bridging the gap between malty and hoppy beer styles.”

Karl: Appropriately enough, the Short’s Autumn Ale pours a bea-youuuuuuu-tiful candy apple red, one of the loveliest colors I’ve ever seen in a beer.  And that’s about the most identifiable characteristic of this beer.  This is one inscrutable beverage.  I think I mean that in a good way, but I’m still not sure.

Short’s describes this as an ESB.  I had this on a Monday evening, after a weekend where I had enjoyed a Ska Brewing ESB or two.  I’ve had a Fuller’s ESB in my day as well.  This resembles an ESB to my palate, but…it’s not quite there.  It’s mildly bitter, yes, and very lightbodied, but there’s a lot more going on with this beer.  Again, I’m still not sure what.

Do you get that this is a perplexing beer?  There are hints of maple, and smoke, and maybe even tree bark, but nothing jumps out at you all at once or even at all.  It’s a subtle canvas of smears of color, blending into each other and making each shade a little different, a little murky.  It’s an enigma wrapped in a puzzle poured into a 12oz. bottle and wrapped with a label.

It is noticeably dry on the finish, and there is a definite hint of red apple that becomes more discernable as it opens.  There’s also the now-familiar Short’s Funk on the nose, the kind we noticed with the Key Lime, and I’m not talking about the skunked bottles.  There’s a general flavor and scent that sits behind a number of Short’s beers that is just strange to me, and I found it in here as well.

Beyond that, this is definitely a WTF beer.  Ryan told me it’s autumn in a bottle.  I was hyped to try this one – and came away shrugging.  Is it a good beer?  A bad beer?  I still don’t even know.  Maybe Ryan can explain it better than I.

Much like Karl I was enamored with the color of this beer.  It looks like…fall.  More like a leaf in between colors, changing from a bright red to brown.  Maybe?  The nose is rather clean.  Clean meaning that there is not much to pick up and also clean because I detected a little bit of soap.  Maybe?  Like Pine-Sol or some sort of pine or evergreen.

Take a sip and you get a light and thin beer with no easily discernible taste.  There are flavors here, but I am not sure what they are.  I too got a little maple syrup, some smokiness, a little bit of apple and a slightly bitter finish.  Maybe there was a bit of unsweetened tea in there?  I think I got other stuff too – but I’ll be damned if I could tell you what they were.