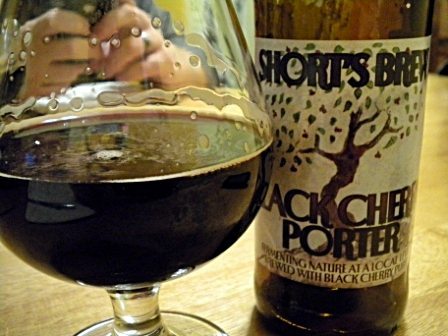 “One of our biggest beers offered, the Black Cherry Porter is a full flavored strong porter brewed with sweet black cherries. The formula consists of several different malts, lending deep opaque color with purple lace from the fresh fruit it’s fermented with. Nearly 4 lbs. of fresh sweet black cherries go into each gallon of brew. A flavor of deep lustrous malt complexity and fullness, yet smooth with soft hints of toasted chocolate and pleasurable black cherry flavors. This beer has become one of our most sought after seasonal selections.”

Karl: As a kid, my favorite generic soda was the nice 40-cent can of Jewel-Osco Black Cherry soda.  When those came out of the cooler after a Park District t-ball game, I was a happy boy indeed.  When Ryan told me there would be a day in my near future where I could merge those joyous Black Cherry summer childhood memories with something that could get me intoxicated, you could say my anticipation level was spiked.

We sat down with the Short’s Black Cherry Porter after an evening of PUMPKINSANITY and to say that we could use a break would be an understatement.  I was very much looking forward to this beer in general, and most definitely was looking for a new sense of flavor after a long evening of nutmeg, cinnamon, nutmeg, allspice, nutmeg and the occasional taste of pumpkin.  I got that new flavor, but whereas I was hoping for a balls-out in-your-face black cherry profile, I received relative restraint.  Still, it was good.  I have hopes for more in the future, tho.

The BCP poured a nice hearty near-black body with a light tan head, with the barest indication of some purple in there to give you a heads up of the fruit presence.  On the nose, I get that similar Shortsfunk that I noticed on the Key Lime and as well on the most recent Strawberry Shortscake I opened, that backbone of odd off-ness that is present in many of Shorts’ offerings.  Beyond that, an oil slick of color floats on top of the glass and there’s a deep wine color around the edge where a little light peeks through the fluid.  Pretty.

Believe it or not, there’s a significant amount of roast and coffee flavor in this porter.  You can tell that the cherry flavor is present, but not too huge.  I spent a lot of time waiting for those black cherries to come on strong, but it never got there.  There’s also some nuttiness on the finish, and even if there wasn’t any cherry promised in this beer it wouldn’t matter – Shorts has an excellent porter on their hands, with the benefit of a little extra touch of that special fruity something.

If you’re hyped about the prospect of huge cherry flavor, like a thicker Cerise (which I love unlike Andrew’s original review – note to self, chime in on that), don’t get those hopes too high.  My expectations were up there, and not fulfilled, and yet, I’m perfectly happy with this beer.  Happy, not ecstatic, mind you.  But I was certainly very happy indeed with the experience.  I know they put 4 lbs of fruit in every gallon of brew.  Maybe we even need some regular cherries.  Shorts is right near the Cherry Capital of Michigan –  I’ll throw in an extra buck if they want to up the fruit next time.  Let’s see what happens.  Or maybe I was just hoping for the Imperial Black Cherry?

Ryan: Sometimes throwing loads of cherries into a beer works.  Take New Glarus’ Unplugged Cherry Stout for example.  It’s very, VERY cherry but the chocolate from the stout and vanilla from oak barrels just works.  Sometimes it doesn’t; Sam Adam’s Cherry Wheat, anyone?  And sometimes you throw a crap-ton of cherries into a beer and it doesn’t come out very, VERY cherry – and that’s OK.  And that’s exactly why I love the Short’s Black Cherry Porter.

There’s no question Short’s used plenty of cherries to make this beer.  4 pounds in each gallon brewed.  But that did not translate into a beer that is puckering and sweet.  Instead, you get a well-balanced porter with just a kiss of black cherries.

As Karl laid out above, this is a really nice looking beer; with the opaque in-color body, tan head and the hues of purple around the edges.  The nose gives off more porter than cherry porter.  Big, robust aromas of dark chocolate and roasted coffee with just a hint of dark cherries.  The same goes for the taste; the cherry takes a backseat to everything that is great about a porter.  You get a mix of coffee, dark chocolate, roasted malts and a little peanut butter with a splash of cherry creating a slightly tart finish.

Frankly, I would happily drink this without the black cherries used to brew it.  As a base, this is an incredibly well-balanced porter.

Ryan: This part of a somewhat short list of Shortsperimenting on our part. Many of the Short’s beers we’ve reviewed over the last two years are new-to-the-bottle beers. Previously, they were only available on tap or via limited bottle release at Short’s in northern Michigan. There isn’t much of a precedent for cellaring these beers.

The first Shortsperiment, the Mystery Stout went very, very well. Better than expected, actually. The second, the Anniversary Ale, was a rather gigantic bust. The Black Cherry Porter on the other hand seemed to land right in the middle. While I wasn’t blown away by this beer after a year in the cellar I certainly wasn’t disappointed either.

The robust aromas of dark chocolate and roasted coffee coming from the glass when drank fresh have been replaced by a certain smokiness, some soy sauce and even a bit of salty meat. While there wasn’t much in the way of cherries on the nose during the first go-round there certainly aren’t any now.

Take a sip and you’ll find a beer that is just bursting with cherry flavors. Those flavors are somewhat offset by a bit of roastiness up front and a drought-like dry finish, but overall the cherries have really popped out and overpowered the likes of roasted coffee, dark chocolate and a hint of peanut butter.

I have to say, while it was interesting to see the cherries catch up with the other porter-like qualities of this beer, I liked it better fresh. I stand by what I said in my initial review:

“Frankly, I would happily drink this without the black cherries used to brew it.  As a base, this is an incredibly well-balanced porter.”

From The Cellar: Short’s Black Cherry Porter was last modified: February 6th, 2018 by The Guys