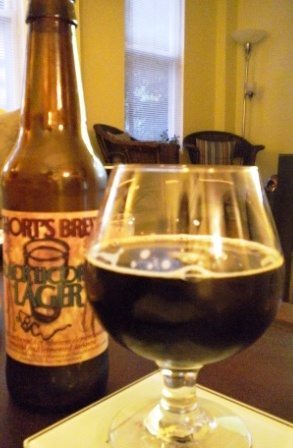 Ryan: When I read the description of this beer I thought, “mint ice cream.”  I know — kind of weird seeing as how black licorice is supposed to star in this show — but reading about the vanilla beans and mint leaves got me all revved up for a fancy dessert in a barley wine glass.  Sadly I was not spot on with my expectations but I wasn’t too far off either.

This beer did have a ton of mint and vanilla in the nose, at least when it is first poured.  In fact, I yelled to Karl in the other room, “this smells like mint chocolate chip ice cream,” as I divvied it up.  Once things calmed down in the glass, though, you get loads of licorice.  That comes from the anise seed which, if you have never used as a seasoning, smells and tastes like licorice.

The anise also plays a starring role as you sip on this “high gravity lager.”  It really hits up front, when the beer first hits your palate, but then gives way to some very nice chocolate and vanilla flavors midway through.  The mint that was so strong in the nose slips in at the very end.

This beer has great carbonation which makes it very drinkable considering it packs a bit of a punch at a sneaky 8% ABV.  I’d definitely reach for one this one again. No doubt.

Karl: Despite all the temptation to gussy up beers with fancypants names and poetic imagery and clever turns of the phrase, I like it when a brewery just tells you what the sweet hell is in the bottle.  The “Nicie Spicy?”  It could have been like Rogue’s Chipotle Ale, in which case I’d probably have liked it more.  The “Black Licorice Lager?”  You bet your ass there’s gonna be some black licorice flavors in there, and it’s good to know heading into it.  It’s the other stuff that was in there that made it another step better, but still…well, you’ll see.

This one poured with a light head with delicate white foam, and you can really smell the heavy presence of the anise seed that brings you those licorice flavors.  And yet, beneath that…is it mint?  Could it be mint, that all-too-rare flavor in beer utilized in a new way with a new flavor pairing?  I smelled it, I had hopes, but didn’t get too much in the initial flavor.

The lager is a hefty beer with more of an alcohol presence than I expected, to the point where the alcohol burn is the most prominent sensation you get from this selection.  Unfortunately, it drowns out the other flavors I was searching for.  Don’t get me wrong, I could still get the licorice, and a touch of vanilla on top of a nice bit of sparkling carbonation.  Eventually, as this developed, I did get a bit of that mint I was looking for — but not enough.

In the end, I’d grab one of these again to throw off my palate if I’m a few beers deep of another kind of flavor, but I feel like I was promised a little more than I actually got.