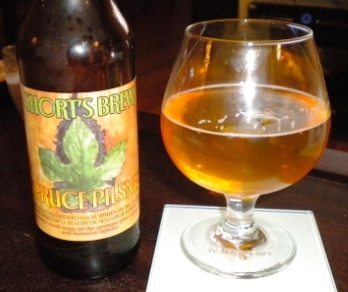 Ryan: I’d like to imagine that this beer was created by accident.  Picture, if you will, Gary Busey’s character Drake Sabitch in the movie Black Sheep making up a big batch of homebrew over an open fire.  He stirs the mash with a butt of his shotgun.  And he’s using hops that have been growing on the backside of his school bus/war room/home.  You with me on this?  Ok, all of a sudden a squirrel goes scampering across a branch knocking dozens of pine needles into the boil.  Sabitch watches, shrugs his shoulders with a “meh”…and then tosses a hand grenade in the general direction of said squirrel.

That is what I imagine happened.  I am sure the brewing wonders at Short’s had a bit more exact science behind it.  You’d have to when you throw tree parts into a batch of beer.

Enough about how it came to be.  What does the finish product taste like?  Well, kind of like a pine cone.  You get a ton of pine tree and pine cone aromas in this beer.  I even wrote in my notes:

You get a lot of pine when you drink this freshly poured too (surprised?).  Loads of it.  Mix that in with the hops used and you get a puckering, almost hard to drink beer.  If you let warm a tad it gets a little bit more manageable.  A few minutes in the glass and you’ll start to taste some of the pilsner and even some biscuity malts in the background to balance things out.

More From GDB:  Snowed In With Short's: Cup A Joe Creme Stout Review

I like this one.  Kind of.  It’s funny, I can handle a Founders Devil Dancer and just about any high IBU IPA that people have thrown at me, but this was almost too much.  Props to Short’s, though, for pushing the envelope with this one.

Karl: I’ve drank beers with a lot of weird stuff in it.  I’ve enjoyed beers with chipotles, beers with herbs, beers with basil, beers with asparagus.  I’ve never, never drank anything with pieces of trees in it.  And you know what?  You don’t argue with results – and this beer gets results.

More From GDB:  Review: Half Acre Freedom Of ’78

Open the bottle and take a whiff – first thought in my head was, “Oh yeah – that’s a freaking pine tree.  No doubt.”  And nothing after that did much to change my initial impression.  Not that it really needed it.  It poured sans head with a gold-orange color and pine, pine, pine.

Don’t get me wrong, this is a bitter beer.  And it’s dry – bone dry.  In my notes I equated it to “like drinking a cactus,” which upon further review isn’t really fair to cacti.  (Hey, Shorts – how about a cactus beer?  A nopales lager?  Thoughts?)  Cactus has a natural certain sweetness to it after it’s roasted, this was just straight bitter hops and pine.  Have I mentioned it’s piney yet?

Also, to be fair, that pineyness does back off on the taste as the more recognizable hops push through.  Even better, you can even get a touch of that pilsner sweetness back there as well if you really pay attention.  But the spruce never really goes away  -and I liked it.  Would I drink 3 in one night?  Nope, couldn’t do it.  But for a beer made with trees, it’s far better than you might imagine and worth enjoying once for the experience.