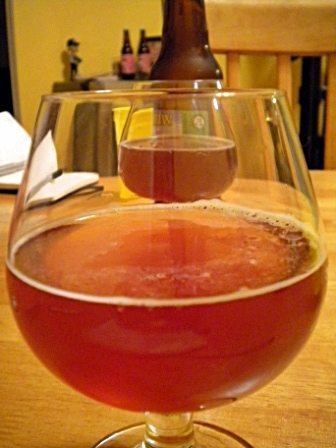 “Beer brewed with marshmallow and lactose with lime and graham crackers added.”

Karl: I’m afraid that Short’s might have shot themselves in the foot with some of their special releases.  When Ryan told me that he picked up something new from Short’s called “Key Lime Pie” featuring fruit, graham cracker, lactose sugars and marshmallow, the only question to be asked was “Will it come close to the Strawberry Shorts Cake?”  Sadly, I don’t think the answer to that can ever be in the affirmative simply due to the overwhelming awesomeness of the Shorts Cake.  Even worse – I disliked nearly everything about this beer.

The Key Lime Pie poured a tan/orange color with a light reddish head on top.  As for the smell…here’s where things started going wrong.  There was a definite and unfortunate funk to the nose, covering up almost everything with its oddness and obscuring any lime, graham cracker or marshmellow that might have been underneath.  This couldn’t have been right, could it?

That funk carried through to the taste of the beer, with a sour/bitter off taste covering everything.  I got no lime, no creaminess, no sweetness, no tart.  Just foulness.  The one part of this beer that I liked shows just how magical beer can be.  I don’t know how the Short’s guys do it, but this was pretty awesome – after 3 or 4 disappointing seconds on my palate, a huge wave of pure graham cracker came crashing across my taste buds.  You could probably see the smile on my face develop along with the taste.  It was pure beer magic.  I only wish the rest was better.

As it opened, the marshmallow flavor developed slightly but not significantly.  That’s about it.  In fact, I can still taste that sour funk right now – that’s how distinct it was.  I would like to know if something happened during the bottling process because this is so out of character with Shorts that I can’t imagine it’s intentional.  I really, really wanted to like this beer.  My hopes were high.  It’d be a shame if somewhere along the line a lot of this went bad – but I suppose it’s a reason to try it again to see what happened.  Otherwise, this beer was a bust.

Ryan: I’m going to skip past the appearance, smell and taste of this beer and just agree with what Karl said.  And I also agree that there might have been something up with this bottle of Key Lime Pie.  At first, I tried to stay optimistic.  I was trying to force what I was tasting, “is that marshmallow?”  I even tried to justify what we were and weren’t tasting, “you know there’s no real precedent for this style.”  But in the end I faced the reality that we probably had a funky bottle.

I emailed Short’s late last week to ask if they had any reports of infected bottles but we never heard back.  There is a thread on Beer Advocate on the subject and, if there is some sort of infection issue, this is not the first time Short’s has had that problem.  The snippet below is from a February press release after a few of their newly released beers started tasting off.

“It’s come to our attention that some bottles of our special release beers have become defunct in the field. First off, we are really sorry if you had an experience with any bunk beer. As we continue to grow, we’re also learning a lot about production brewing and the challenges it comes with. We take the quality of our beer seriously and want to make sure our best efforts make it into the market. Unfortunately, we have had some stuff slip through that’s not up to our standards.”

Short’s was working on getting a fully functional lab up and running this year. The brewery also noted that when you throw off-the-wall stuff in beer you don’t always know how it is going to turn out and how the flavors are going to change over the initial weeks and months.

I sent a message to a fellow beer blogger in Michigan who suggested maybe we let the beer warm up a bit before we even try sampling it.  We have a few bottles left so we are going to do just that and report back in a few days with our findings.