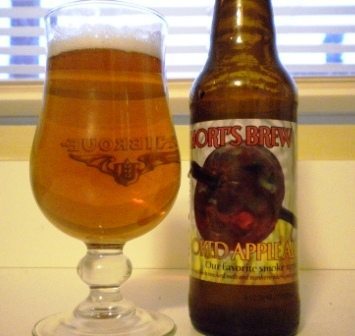 
When someone says “you’re probably not going to like this beer,” we’re always willing to step up to the plate and see if that claim rings true.  Granted, sometimes it’s a marketing ploy.  When Stone’s Arrogant Bastard says, in effect, that most people are too sissy to enjoy it, naturally it’s going to get more than a few people to prove them wrong.  (The exception that proves the rule is Malort’s.  If you’re not from Chicago, you won’t know what we’re talking about, but take our word for it.)

Anyways:  When Ryan pulled Short’s Smoked Apple Ale out of the fridge and said “I hear most people don’t really like this,” it sounded like a challenge – one the Guys were more than willing to take on.

Ryan: Poured into a Belgian tulip this glass this beer looks like, well, apple juice.  A nice golden honey in color with just a fingers worth or so of white head.

This ale smells of more smoke than apple.  In fact, the nose is all smoke.  I do not detect any apple.  Nada.  Zip.  Zilch.

At first sip there are subtleties of both apple and smoke but neither are strong or really that prominent.  The smoke flavor really comes through on the back-end.  Actually, more like long after you took a sip and you start to raise the glass to your lips again does the smoke flavor really pop out.

As this beer warms the smoke fades and the apple takes over.  I think I liked it better when the smoke dominated.

The aromas of this beer make me think of sitting around a campfire, or the smell of your clothes after the fact.  And the apple flavor is reminiscent of the applesauce I had in my sack lunch when I was in grade school.  So, I guess this beer takes me back to when I was…11?

Karl: Like Ryan, first on my notes reads that “it smells like a campfire that someone threw some apples into.”  I’ve been around more than my fair share of campfires in my day (you’re reading the drunken ramblings of a certified Eagle Scout right now, don’tcha know) and can appreciate the smell of smoke as much as the next guy, but in a beer?  I’ve always been split about the concept of smoke ales.

The Smoked Apple has a cider-like body, a little sparkling with carbonation and really more like apple juice than anything else up front.  The smoke actually takes its time to present itself on the palate with this beer, which is in contrast to the (admittedly few) other smoked beers I’ve had.  Others were all in the nose, whereas the actual taste lacks smoke.  Make no mistake, there was a distinct smoke scent to this beer, but it carried through into the flavor.

Believe it or not, I got a distinct taste of either celery or Cel-Ray soda as this opened up a little bit.  Again, celery soda is certainly a hit-or-miss prospect for a lot of folks, just like this particular beer, but every time I go to Hot Doug’s I can’t help but get a can of Dr. Browns Cel-Ray.  I like it.  And I liked this beer.

Were I to stumble across it again, it would pair absolutely perfectly with a nicely grilled or roasted piece of pork tenderloin.  Barbecue would work as well, as long as we’re talking about slow-smoked pork products and not just meat doused in sauce.  But I won’t begin ranting on my BBQ beliefs here – it’s enough to say that I’d love to have this with a pile of rib tips.