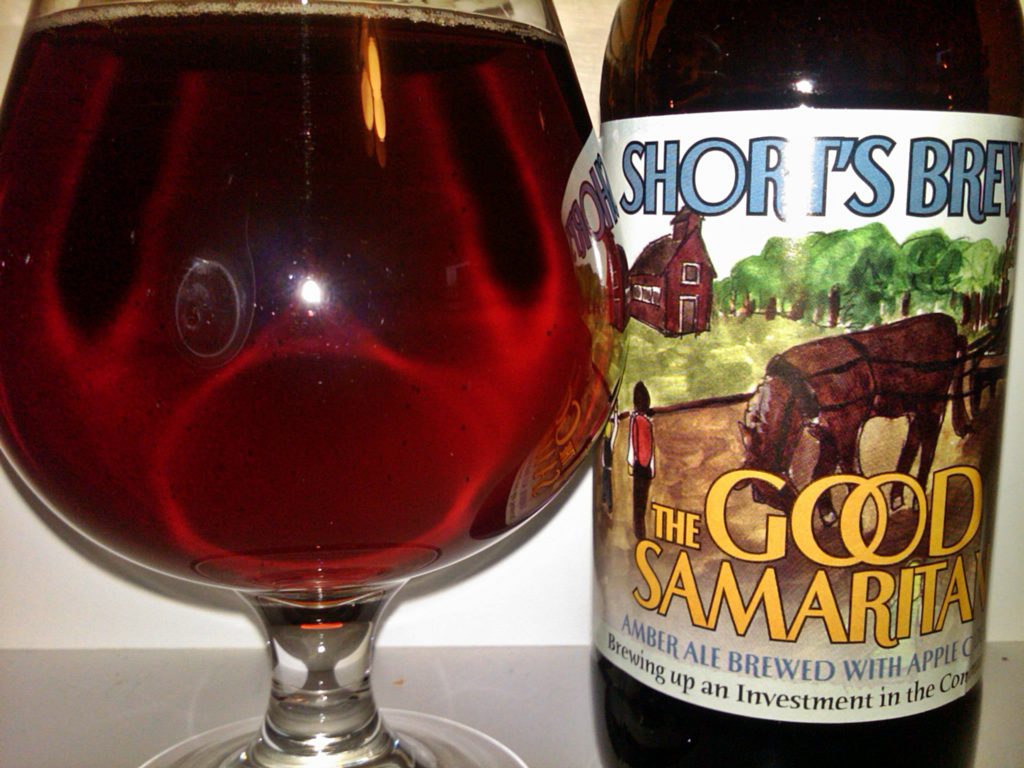 “Brewed with local cider. Sweet apple aromas and spicy esters of clove, nutmeg, and allspice entice the nose. A pleasant crimson amber tone and slight haze give this beer an appearance similar to the cider it was made with, while malty hints of raisin and molasses balance the complex spiciness found throughout the profile. The finish is surprisingly clean with no particular flavor component resonating on the palette.”


This was a surprisingly solid offering from Short’s.  I say surprising because, in the past, some of their beers we have sampled have been somewhat hit or miss.  For instance, Strawberry Short’s Cake was a HIT but the Key Lime Pie was a pretty big miss.  Other beers have been just fine, like the oddly perplexing Autumn Ale.  I assumed going in that an amber ale brewed with apple cider would wind up in the miss column.  And, as is the case more often than not, I assumed wrong.

Short’s The Good Samaritan poured a somewhat translucent, bright ruby in color with little head but some nice purple hues near the edge of the glass.  This is a rather vibrant looking beer that gives off a nose reminiscent of a warm mug of apple cider with a cinnamon stick for garnish.  You also get some nice, warming brown sugar and definite apple crispness.

Take a sip and you’ll find a warming beer that blends flavors of brown sugar, caramel and dark fruits with unpeeled apples and apple juice.  The mouthfeel is slightly creamy but balanced out very well by some nice carbonation.  As the commercial description suggests The Good Samaritan finishes very clean and doesn’t leave behind much of an aftertaste.

I have to admit, I enjoyed this more than I thought I would.  But I could probably only have one in a sitting and I likely wouldn’t pick up a six pack of this.  Still, it’s nice to have a bottle stored around for a rainy, cool day.