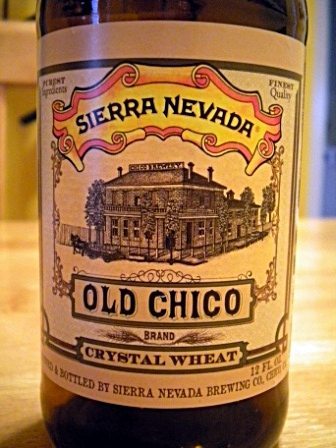 “Brewed using 65% wheat malt and 35% barley malt. This filtered wheat beer is light blonde in color, light bodied and has a wonderfully clean finish. This is a great choice for craft brew novices and beer aficionados alike.”

Karl: Before we get rolling here, allow me to take you along with me on the journey of this beer.  The Old Chico, as you can see from the label, is “only available locally.”  So how the hell did we end up with it in Chicago?  No, there was no lying to the USPS.  No shipping.  No intracontinental trading.  The Old Chico came to us the old fashioned way – on a beer run. 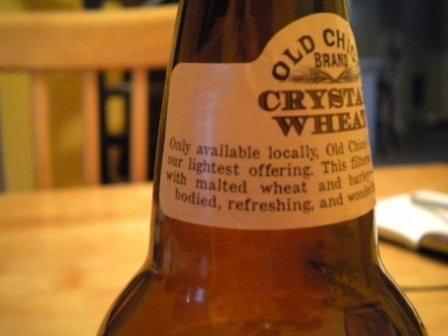 “Only available locally.” Read: NOT IN CHICAGO

See, my brother was working for Americorps a while back and took his rare time off to scavenge for beers unknown to Illinois.  He came back with a trunk full of Sierra Nevada beers that I had never heard of – and boy, did they pay off.  He kindly graced me with a dozen 24oz. bottles of SN’s Southern Hemisphere, and my other brother got a case of the Old Chico.  I traded him 24oz. of the Hemisphere for one lonely 12oz. bottle of Chico – and having now had it, I consider it a fair trade.

So, to review:  Chico, California, to Sacramento.  Then, they drove all over the American West and central midwestern states.  (This beer saw Mount Rushmore, for example.)  After that, to my other brother’s refrigerator, to my closet, to Ryan’s beer fridge, to our respective stomachs.  Quite a journey.  And well worth it.

The Old Chico is a damn good looking beer.  Gleaming golden in color and filtered crystal clear – what the “Crystal” in “Crystal Wheat” refers to, I’d wager.  It even sparkles a little bit with champagne-like carbonation bubbling up from the bottom of the glass, as you can see from our handy-dandy YouTube footage:

Okay, so you can sorta see it.  That’s not the point.  Nor is my bad camera usage.  The point is, this is an excellent, excellent session beer.

Ryan: “I would drink eight of these.”  I scribbled this in my notebook after taking my first sip of a beer that I may never have again.  As Karl laid out for you, using everything but google maps, this is only available to locals.  Which leads me to believe people who live in Chico, CA have it alright.  The Old Chico looks good, it tastes good and goes down very smooth. 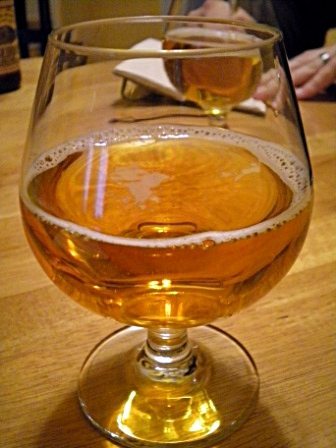 Did I mention it looks good?  Just look at that gorgeous, golden straw coloring and the nearly crystal clear opaqueness.  Does it smell and taste as good as it looks?  You betcha.

This beer smells like a pilsner, has a body that’s pretty darn close to a berlinner weis and the taste of a toned down pale wheat ale.  I say toned down because the wheat up front and the slightly bitter hops in the finish, while subdued, are present enough to make this very flavorful without packing a high ABV punch (5%).  The carbonation is very lively and almost champagne-like which prompted the berlinner weis comparison.

This is the kind of beer that you give to someone that claims they only drink Bud Light or Miller Lite or any other lite/light beer you can think of.  There is tons of flavor in this beer, but not so much that a virgin palate is overwhelmed.  If I had this readily available I’d be drinking it year-round.  Sierra Nevada, we just might be paying you a visit soon to pick up a case or two of this.