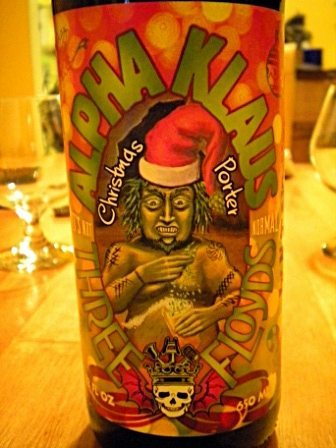 
Andrew: Last summer, while attending a party at Ryan’s place, I walked away from a bottle of beer while I made a quick trip to the restroom. Little did I know, while I was gone, someone dropped a cigarette butt into bottle  thinking it was empty. Upon my return, I eagerly took a swig of my beer and tasted nothing but cigarette ash. That’s how I felt drinking the Alpha Klaus…like the combination of an ash tray with the bottom of a charcoal grill.

The beer poured very dark with a big tan head that dissipated quickly. The nose offered notes of hops, spices, chocolate and what can best be described as the smell of something burning.

And then I tasted it…ash tray. Sure, I got some hops, coffee and chocolate but it was all over powered by a dry, smokey, ashy flavor.

During our 12 Beers of Christmas tasting, this was by far my least favorite of the twelve, and because of that I really struggled to finish it.

In fact, I didn’t want to finish this beer…I probably shouldn’t have.

Karl: guess I wasn’t really in a mood for hoppy beers this Xmas-beer-tasting night, because as I go back over my notes I see that I wasn’t huge on the Celebration, and now I have to go and shovel coal on the Alpha Klaus as well.  This was a huge IPA on the tail of the Jolly Pumpkin, and maybe my palate was still having its ass kicked, but the Alpha Klaus didn’t do much for me.

I counted three notes to this beer:  One, hops.  Two, roast. Three, dry.  This beer is all crazy amounts of hops on the nose and then you suck deep off the top of that beer, you get a big whiff of chocolate.  I actually loved the smell of this beer – you have to dig deep to get past the pine and when you do, it’s like you’ve earned that sweet dark chocolate scent.

Beyond that, there was a certain smokiness to this beer that got in the way for me.  Almost like a cigarette or cigar over-roast to the malts that affected the flavor but it was just all hops and burnt roast and another dry finish.  When it comes to seasonal brews, Robert The Bruce will suffice for my Three Floyds fix.

Ryan: I think we’re all in agreement on this one.  There was a certain overpowering smokiness to this beer that just didn’t do it for us.  Funny thing is my wife, who has yet to find a porter our stout that she likes, fell in love with this on tap the night after us Guys did our tasting.  Go figure.

Karl is right, there is nothing but pine needles, pine cones and tree sap in the nose.  It’s almost like all those loose needles that Charlie Brown shook off that pathetic Christmas tree wound up in the brew kettle. 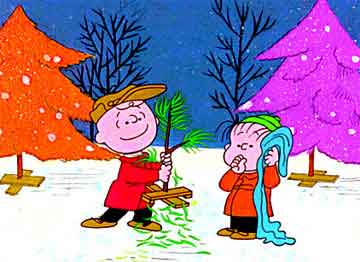 And, yes, there is some chocolate in the nose too but you’ve got to get waaaay in there to find it.  When you first take a sip this starts out as a pretty good beer.  You get big rushes of burnt chocolate, the aforementioned pine needles and hops followed by a surge of coffee.  But the finish is where the smokey, ashy and unpleasant burntness comes in to the picture.

There are some redeeming qualities to this beer; the rich chocolate in the nose, the abusive rush of coffee and the warming vanilla that comes as this beer gets closer to room temperature.  But all that is voided by overpowering smokiness.  Frankly, this beer should probably come garnished with a charcoal briquette.