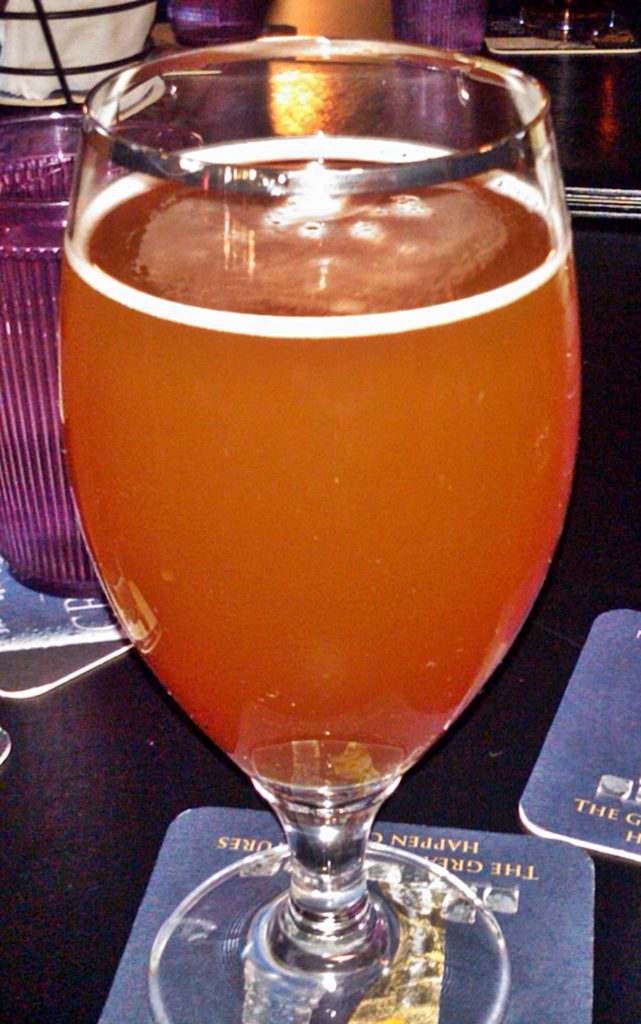 “Bold, spicy, menacingly delicious HopDevil takes on an entirely new dimension when subjected to a wild yeast fermentation. A sharp, tart edge has been added by this fermentation that plays into the caramel sweet malt deliciously and creates complex interplay with the citrus accented hops.”

Ryan: This was a standout beer in what turned out to be a rather spectacular day of bar hopping on a Saturday afternoon in Chicago.  We started at, what I would consider a pretty damn good intersection of bars.  In fact, I would challenge anyone to find a better locale in terms of quality.  We started at Wild Goose where craft beer pitchers are $14 on Saturdays.  Their tap list included the likes of Half Acre’s Daisy Cutter, Lagunitas A Little Sumpin’ Sumpin’ and a few others that escape my memory.

From there we went across Lincoln Ave to Gannon’s where Bell’s seasonal pints, in this case Two Hearted Ale, are $4 on Saturdays.  Around dinner time we wandered across Cullom to Bad Apple, which is an outstanding burger/beer bar.  Up to that point, I had been doing pretty good in sticking with low ABV – for the most part – beers.  I started with Half Acre’s Over Ale and had a few Two Hearted’s (whoops 7.2%) because that’s a great special.  \

But all bets were off once we walked in to Bad Apple.  And the first beer to catch my eye, buried at the bottom of the draft list was Victory’s Wild Devil.

The beer poured a vibrant orange in color and it was as cloudy as could be.  Maybe it was the purple water glasses, but the color of this beer really popped.  And so did the smell, giving off a hint of floral hops, a little tartness and maybe some cherries.  Take a sip and you get some floral hops up front followed by Belgian yeast and a dry, tart finish.

Now I’ll go on the record as saying I sometimes don’t like the Belgian yeast component in a Belgian IPA.  I sampled New Belgium’s version of that style the night before and wasn’t really a fan.  But it worked with the Wild Devil.  Maybe it was the Brett that was thrown in to the mix that didn’t allow this beer to become too sweet.

Once this beer warmed up it became, essentially, a bright and floral IPA with a tart kick in the finish.  This may be the Belgian IPA that helps me turn the corner into enjoying the style a little more.

For those of you who are wondering, our day of craft beer bar hopping wrapped up at 42 N Latitude where I should not have had North Coast’s Brother Thelonious, not because it wasn’t good but because it was a little too boozy for the last leg of a bar crawl.  We also dipped in to the Fiddlehead Cafe for one.  All-in-all a great day of craft beer with some great friends.