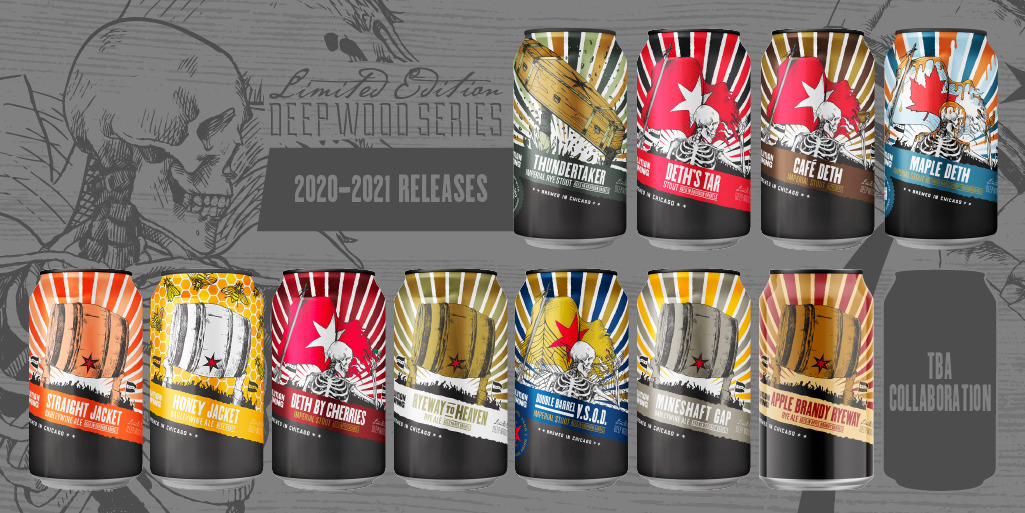 …and the first Deep Wood Series 2020 option will emerge in just a few weeks.

The last couple years have seen a battle begin to emerge between Revolution Brewing and Goose Island over whose barrel-aged beer lineup will reign supreme. We told you about Goose Island’s annual offerings a couple weeks ago — now it’s Revolution’s turn to showcase this year’s options.

The Deep Wood Series 2020-2021 variants actually have a bit of overlap with the Goose options this year — both breweries will produce a barrel-aged beer made with bourbon-barrel-aged maple syrup, for example.

Similarly, Goose will have an apple-infused wheatwine, while this year sees an apple-brandy-barrel aged Ryewine from Revolution. Similar ideas, different implementation — it’ll be fun to blind taste these guys back to back and see what happens.

One place where the Deep Wood Series 2020 lineup has an immediate step up on Bourbon County is this: Revolution is actually giving us a beer aged in Blanton’s and Buffalo Trace barrels, whereas Goose Island only teased us with it this year.

Advantage Rev on that one.

Another advantage is that Rev already knows that curbside pickup is the way to go for these releases — a pre-order will be available to set a time for retrieval of 4-packs of 12oz. cans, meaning no standing in parking lots on holidays for these guys.

As for the TBA option mentioned below … maybe we can still convince Rev to give us any one other of the options Goose has dangled in front of us in prior years. Horchata Straightjacket, maybe? Peaches & Cream Ryeway, anyone?

Chicago’s lucky to have two top-tier breweries with world-class barrel-aging operations fighting it out for supremacy these days. If you weren’t already eager for autumn and winter to hurry up and get here, the Deep Wood Series 2020-2021 is a pretty good reason to start anticipating cooler weather.

This year’s lineup hits with more barrel variety, blend complexity, and stylistic flair than ever – though the brewery is also bringing back refreshed versions of some of fan-favorite Deep Wood variants over the years.

“Every single turn from the brewhouse for the Deep Wood program has a purpose. Every time we mash in, we know what that finished product is going to be, whether it’s sweet component for extended aging, or a dry component that balances the final product,” Barrel Program Lead Marty Scott said. “We’ve really hit lately with traditional beers, engineered for ridiculous amounts of development, complexity and sweetness. Pair that with the improvements we make every year, and this year should be a banner year.”

● Honey Jacket – Bourbon Barrel-aged Barleywine with Honey from beehives on the roof of our Kedzie Brewery.

● Ryeway to Heaven – A Ryewine carefully matured in rye and bourbon barrels.

And new to the lineup this year are collaboration with Binny’s Beverage Depot, apple brandy barrels to finish our lustrous Ryeway, and the elevation of our partnership with Chicago Maple:

● TBA Collaboration – A collaboration with one of our Chicago friends that isn’t quite ready for prime time.

Revolution has worked hard to create a curbside release experience that’s safe and easy for customers and employees, and is ready to bring that approach to the whole Fall/Winter series.

Fans will be able to pre-order four-packs of 12-ounce. cans online, and schedule a time to pick up their Deep Wood beers from the Revolution Brewery (3340 N. Kedzie).

In addition to curbside release at Revolution – Deth’s Tar, Café Deth, Straight Jacket, and
Ryeway to Heaven will get wide distribution. Deth by Cherries and Mineshaft Gap will see limited distribution. Thundertaker will see exclusive distribution at Binny’s Beverage Depot.

Maple Deth, Honey Jacket, Double Barrel V.S.O.D, and Apple Brandy Ryeway will be
brewery-only releases. More on the beers, release events, and the history of the Deep Wood Series can be found on our Deep Wood Series page.