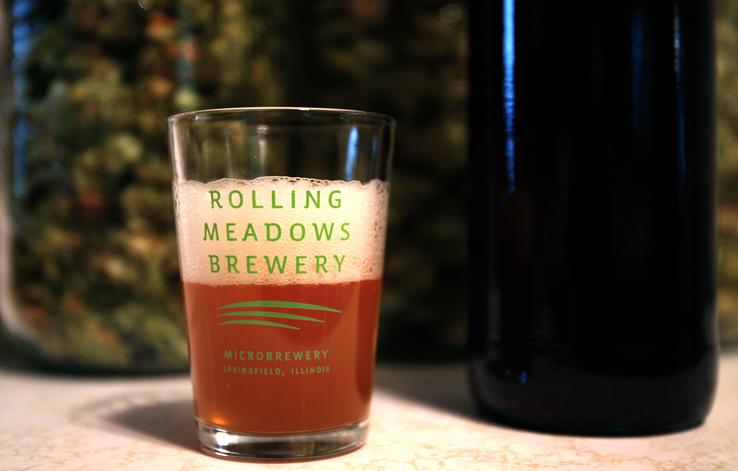 In central Illinois there exists, what we would consider, a craft beer desert. Sure, you can find beer from the likes of Schlafly and Boulevard – two Missouri based breweries – on store shelves and on tap at bars, but there is no local brewery or brewpub in the state’s capitol of Springfield. In fact, in order to find locally brewed beer you would have to drive at least an hour and a minimum of 75 miles in any given direction from Springfield to find it.  But that will soon change.  Rolling Meadows Brewery, which is located on a family farm outside of Springfield, has been ramping up plans to open a production brewery and – depending on how the current craft beer distribution legislation in Springfield pans out – hopes to have its beer on tap at bars and restaurants in central Illinois in a month or so.

Rolling Meadows is a family run brewery, operated by a mother and son – Caren and Chris Trudeau.  According to the breweries website they’ll initially be brewing three different beers:

Along with the hops grown on site Rolling Meadows will be plucking other goodies out of the ground to be used in their beers, including vanilla beans and coriander.

Caren and Chris’ passion for brewing good, quality beer is matched only by their desire for the state’s self-distribution laws to stay in tact.  They’re operation hinges on the ability to distribute their own beer, according to an article in Springfield’s State Journal Register.

“…if Rolling Meadows has to sell through a distributor, the brewery’s profit margin would be reduced to the point where “we’d be doing a community service.”

Chris Trudeau went on to tell the paper that if they had to work through a distributor their beer would travel from Springfield to Peoria and then back to Springfield instead of being shipped directly to bars and restaurants.

“Our business plan depends on the ability to self distribute, at least in our own area until we know our wider market and production ability. We have eighteen different bars and restaurants who would like to sell our beer and purchase it directly from the place that it is produced, fresh and cool delivered to them by the people who make it.”

We’ve talked with both Chris and Caren at length via email and over the phone the last two months.  They want what the craft beer community wants, locally brewed beer on tap at bars and restaurants.  And It doesn’t get much more local than this; beer brewed on a 1,000 acre family farm using locally grown ingredients to produce beer that is staying local.

Don’t let Rolling Meadows Brewery become a mirage in Springfield’s craft beer desert.  Save The Craft, support your LOCAL brewer and contact your local lawmaker to let them know you want small brewers like Rolling Meadows to stay in business and want a craft beer friendly business environment in Illinois for years to come.

Save THEIR Craft: Rolling Meadows Brewery was last modified: February 6th, 2018 by Ryan