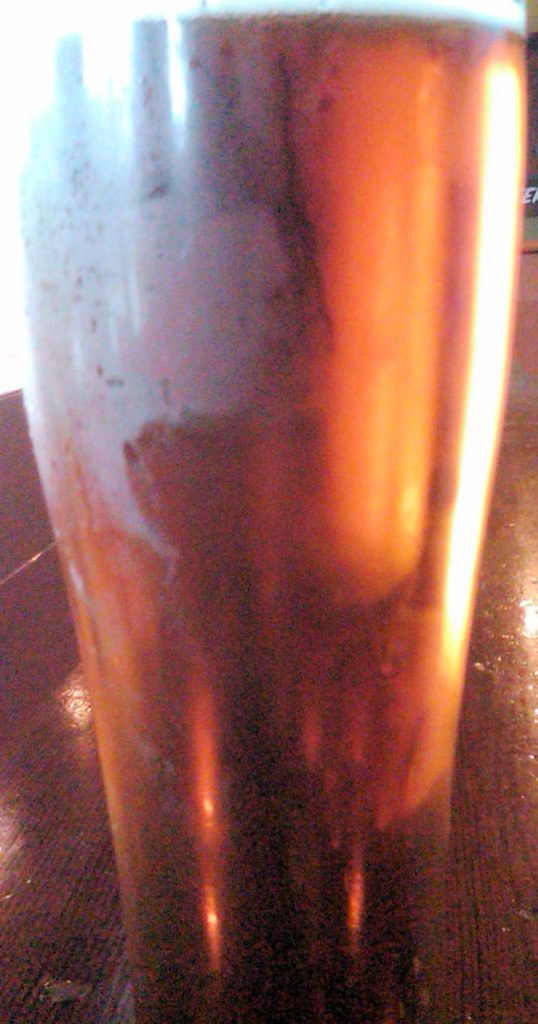 Andrew and Ryan had the Schlafly Dry Hopped Marzen on tap at the Schlafly Bottleworks after a tour of the brewery. First, a sample and then a full pour.

The dry hopped Marzen is a very recent, as in the weekend we were there, release of a collaboration between one of our favorite Midwest breweries and a kick-ass little brewery in Stuttgart, Germany called Calwer-Eck-Brau.

The beer was released to celebrate the 50th anniversary of St. Louis and Stuttgart being sister cities.  Which may be, in our humble opinion, the best way to celebrate having a sister city.

Enough about the history; on to the beer!

Ryan: This combined style was rather intriguing in my opinion.  First, you have a Marzen which is typically a wonderfully malty and sweet beer.  But then, you add dry hopping to the mix and add a citrusy punch to a beer.

The end result was an incredibly tasty and very easy drinking beer.

As expected, it poured a nice copper color with just a fingers worth of head that slowly faded.  The smell was a hint of malty sweetness and orange peels.

The taste was a very enjoyable mix of sweet malts, a touch of honey & just a pinch of oranges.  The body of this beer seems on par with the style, maybe even a little bit lighter, which made it go down very smooth.

Someone at the Bottleworks, quite possibly the bartender, told me it clocked in at a mere 5.5% ABV so this is an easy drinking beer.  I could easily kick back with three or four of these on a lazy Saturday afternoon.

Andrew: The beer poured a deep red/brown color with a slight head, already I could pick up notes of malt and spice. I must say the flavor of this beer was very interesting, I don’t think I’ve had anything quite like it.

It was very balanced with the hops adding an ever-so-slight bitterness combined with a little nuttiness. The malt ruled above all as the pronounced flavor which helped make this a very smooth, clean finishing beer.

If you are within an hours drive of Schlafly’s Bottleworks or Tap Room we would highly recommend dropping in for a pint or two.  Tell ’em The Guys sent ya! (Editors note: Don’t do that. The fine folks at Schlafly will have no idea what you are talking about)