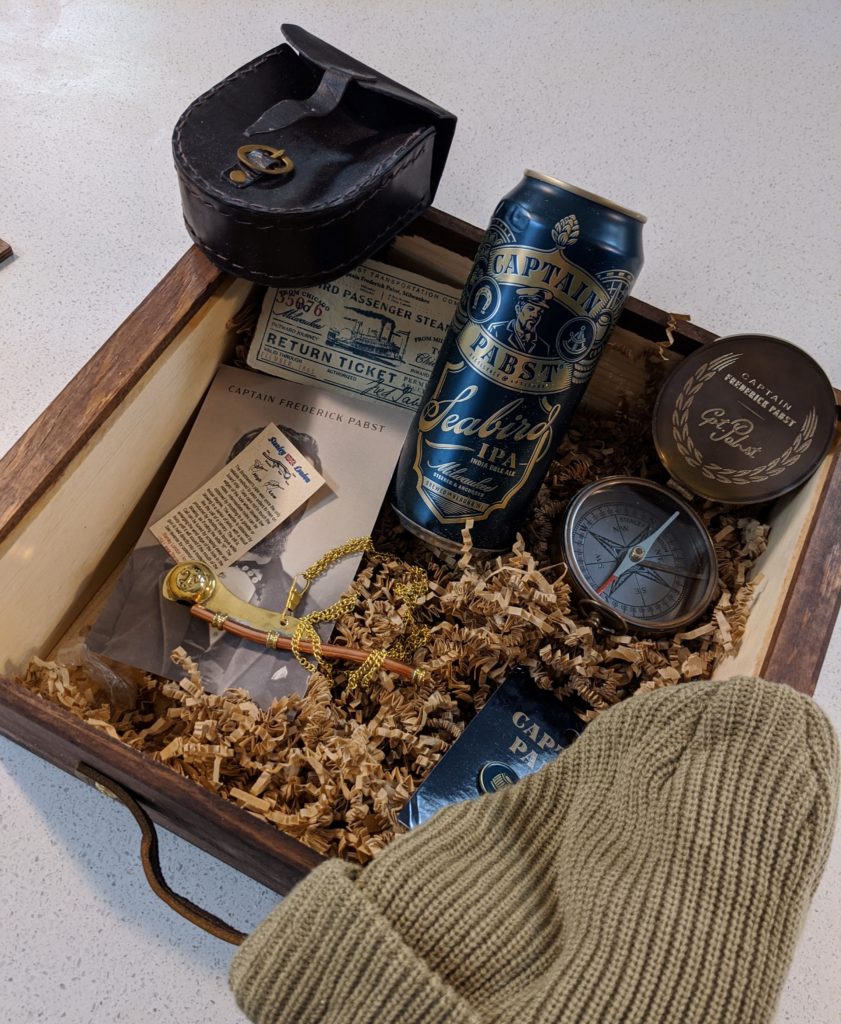 Before we talk about the beer — which I enjoyed — let’s talk about the marketing materials that are backing up this big new product launch from Pabst Brewing. Here’s how you know they are f’ing serious about this beer.

I am shooketh at how much stuff the Pabst Brewing Company sent out to support this new Seabird IPA. We start with a rough-hewn wooden box:

So far so good, right? This actually isn’t the first time I’ve received beer through the mail like this. Bell’s sent out a similar case for their Oatsmobile rollout a few years ago … and have you seen any of that on shelves lately? (It’s too bad. The beer was good, and the world needs more nice pale ales.)

Then we open up the case and we see a whole bunch of nautical … stuff. Stuff that I can’t see myself ever using but … I’m honestly impressed at the amount of thought that went into stuffing a box full of shit to send to idiot beer writers like myself.

Like a reproduction of a ticket for Captain Pabst’s ship, and a photograph of the captain himself:

Dude kinda looked like the actor who played Badger in Breaking Bad.

After that there were some nautical-style pins that line up with the symbols on the can (pretty cool) and there was a knit hat too (also pretty nice).

And then you pull out … a compass with a faux-leather carrying case?

…we’re not done yet. No sir — we’ve still got to show you the boatswain’s whistle that they also sent, complete with instructions on how these were used on the actual ship:

…oh, and they sent some beer, too.

All in all, legitimately the most extensive, wildest press kit I’ve ever been sent for a new beer. Pabst Hard Coffee didn’t get this kind of rollout. The relaunch of Ballantine Ale didn’t get this crazy. I wonder if a beverage company will be rolling out a similar package for a vintage hard seltzer in 2180.

All of this is to say — I love how big of a swing they’re taking with this, even if the beer is only available to Wisconsin and Chicago as of right now. I also appreciate that they’re not putting out an IPA under some random brand that they own — they’re making a goddamn Pabst IPA.

(Here is where we need to tell you — if you didn’t already figure this one out on your own — that the beer was provided for free from the brewery for the purposes of this review.)

So, what about the beer itself? It’s solid. A decent IPA that reminds me of the session IPAs I sampled pretty much throughout 2014, and this one clocks in at just 4.5%. That makes it a bit more light and drinkable, and I could see this excelling as a warm-weather kind of beer.

The body is borderline watery, but in a way that’s more thirst-quenching than flabby. Color is deep, rich orange-copper with a nice lingering fluff of bright white nicely carbonated foam. It’s not completely clear … but also definitely not hazy. Are semi-cloudy IPAs the next big thing?

Made with Magnum, Mosaic, Citra and Cascade hops, there’s plenty of spicy bitterness that goes beyond what I’d expect from a 45 IBU beer. There’s not a ton of sweet citrus fruit character from this beer, which leads me to believe that the citra and mosaic are on the lower end of the scale while the more bittering Cascade and Magnum hops are right up front.

Since this is a beer made to honor a ship that ran aground in the 1830s, it makes some thematic sense that the hop bill leans a little more … historic as well. It’s definitely not hugely complex — but it isn’t unpleasant.

But where does a beer like this fit into the modern IPA landscape? That all comes down to price, I think. I’ve seen this around at grocery stores and so on for roughly $10 a 4-pack. That’s on the median-to-lower end of things these days … but there are still plenty of options around that price point. At even a dollar less, this could go places in this format.

Get this to no-brainer pricing and I could see this moving well if you’re standing in a convenience store looking at a parade of other $12-$13 six-packs.

This’ll be a fine tailgate IPA. Casual, straightforward, and you can drink 3-4 without too much effort while getting some good straightforward hop flavor beyond more run of the mill macro lagers. Technically this is the Seabird IPA, but I predict most people will be calling for The Captain to come out of the cooler.

All of this is part of the Pabst company’s big Captain rebrand — they’re retooling their Milwaukee brewpub (which we originally visited when it opened in May 2017 — ironically in that post we asked ” What the hell does a Pabst IPA taste like?”) to the “Captain Pabst Pilot House” which makes it seem like they’re pretty committed to this new extended brand under the Pabst banner.

It could work, though in recent years the success of heritage brands has been hit or miss — so putting an IPA under a banner that seems similarly rustic is a bit of a gamble. Plus the company definitely needs something to fill the hole that the now-flagging Not Your Father’s Root Beer line has opened up.

But very few breweries have gone bankrupt betting on the American public to drink increasing amounts of IPA. Let’s see if the Pabst team can successfully shove another one in front of us. And thank you for giving us a reason to write about a beer instead of a big company rolling out another seltzer.

And based on the swag that came along with this, I bet their GABF setup is going to be crazy.

Seabird IPA from Captain Pabst: We Drank It was last modified: February 12th, 2020 by Karl