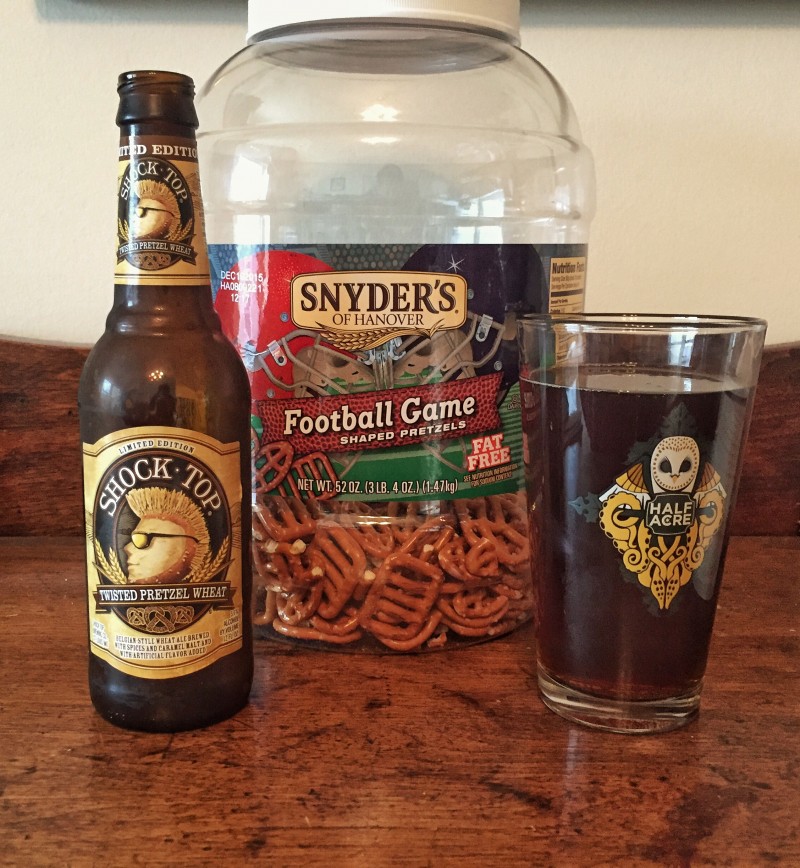 The Shock Top Twisted Pretzel Wheat, from A-B’s oft-maligned “crafty” line of beers, was a rare outlier — people were actually saying it was pretty good. Was it?

When you have a big plastic bucket of pretzels AND a pretzel beer to review, you have to combine the two in a photo, right?

It was a few years ago when I heard the first whispers about the pretzel beer that Anheuser-Busch was apparently testing in a few markets. I wouldn’t even remember it at all unless those same people who mentioned it also quietly, furtively, almost shamefully added, “and I heard it was pretty good, too.”

As I review the number of Shock Top beers available to the world, from Strawbanero Wheat to Honey Crisp Apple Wheat to Shockolate Wheat (see a trend?), only the Twisted Pretzel seems to have made it past mere curiosity into wider availability.

Prior to a few days ago, my last contact of any kind with Shock Top was seeing their orange-clad “brand ambassadors” with push broom helmets handing out swag outside the main hall at GABF in 2014. Otherwise, Shock Top falls into the category of things like the -a-Rita series or those brief Michelob attempts at craftier beer. But hell, when someone randomly emails you and says “hey, Twisted Pretzel Wheat is going to be available seasonally through this winter, and would you like to try some,” all of this informs your decision to say “sure, what the hell.”

I should say right up front that if the speed at which someone plows through a sixer of any given beer is an indication of how much one likes it,  this was the first beer that lasted long enough in my fridge for my wife to threaten to throw it out if it was still there at the end of the weekend. A few begrudging bottles later, I could say safely that no beer would be discarded unnecessarily on my watch, no matter the maker.

Okay, so onto the “reviewing” part.

Here’s the deal about the Shock Top Twisted Pretzel Wheat: It smells exactly like a pretzel. Seriously. You crack open the bottle, jam it to your nose and inhale, and you’ve got nothin’ but bready, yeasty dough, fresh-baked and a little salty. There’s also a hint of raw bread dough, just waiting to be boiled in an alkali solution before being brushed with butter and baked. In this, the mission of Twisted Pretzel Wheat is entirely successful.

If I were to get all BJCP Judge-y on this one, my notes would probably read as follows:

Once you get past that part, though, things drop off fast.

Visually the beer is deep brown in color (well past pretzel coloration, unless you prefer yours burnt to shit) with a tight, thin white head that dissipated quickly. Flavorwise, you got a lot of sweet, bready malt going on with this one — no surprise there either, although I was a little taken aback at how wholly malty the beer was. The wheat adds a slight creamy touch to the body, but it’s still pretty anemically thin.

The pretzel-ness in the nose doesn’t carry over into the flavor (and it’s up to you to decide if that’s a good thing or not). There’s no bite of salt and no real sharpness or bitterness brought by any hop profile either, which I’d half-expected in some shape or form on the finish. Instead you get a beer that reminded me of a meagerly capable dunkel that loses its one defining characteristic quickly as the aroma wafts away. And since this beer is a “Belgian-style” brew (per the label), do you get any of that anywhere? I didn’t. Coriander? Orange peel? Nope and nope.

The followup question is: who exactly is this for? Of all the many adjuncts that have been dumped into a beer in the name of experimentation, I don’t know if I’ve ever thought that a mixture of pretzels and alcohol was at all anything that I wanted simultaneously. I mean yeah, there are snacks that go well alongside of beer, but that doesn’t mean I want to put them in a food processor and concoct some sort of Cheez-Its and Busch Light smoothie.

Look, I applaud A-B for offering up an example of experimentation that goes past a product that was market tested to death or just another ripoff of something else that was successful elsewhere. In that vein, this might be the craftiest thing that A-B has ever done. And much like many other average craft beers, I just don’t need to ever have it again. That’s all. Try it once to see what kind of marvels that olfactory science can achieve. You probably won’t need it much past that.

Twisted Pretzel is available in 6-packs and 12-packs as well as 16oz. cans, though I can’t see this being a compelling drink for more than 8oz. at a time.

*As mentioned above, this beer was provided gratis by a marketing company. As a rule, GuysDrinkingBeer does not solicit free beer and we rarely accept beer samples for review, except when we believe it would be editorially compelling or interesting to our readers. For more on our policies on beer writing ethics and transparency, see our post here.