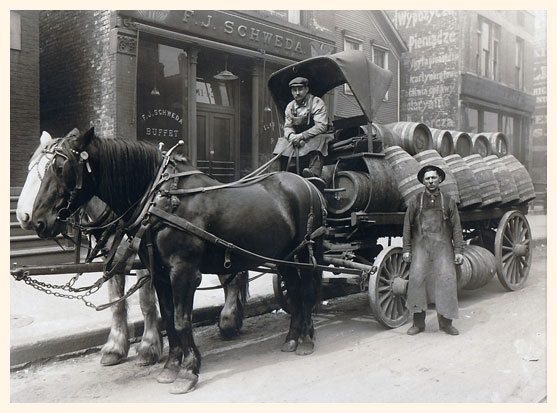 “Outlined against a blue-gray October sky, the Four Horsemen rode again. In dramatic lore they are known as Famine, Pestilence, Destruction and Death. These are only aliases. Their real names are Stuhldreher, Miller, Crowley and Layden. They formed the crest of the South Bend cyclone before which another fighting Army football team was swept over the precipice at the Polo Grounds yesterday afternoon as 55,000 spectators peered down on the bewildering panorama spread on the green plain below.”

The lore of the biblical four horsemen remains, but a new brewery in South Bend is looking to rename those horsemen; Hop Rush, Irish Red, Irish Stout and Pale Ale.

We caught up with Four Horsemen’s VP of Sales and Marketing Ben Roule, via email, to find out more about this less than two-year old brewery to our East.

GDB: First off, Ben, talk to us a little about Four Horseman Brewing and how the brewery came about?

Roule: The best way to explain this without writing 2 pages is to go to our website and click on “Our Story” this will explain how FH came about.

GDB: Looking at your logo three things immediately come to mind; Grantland Rice, Notre Dame football and the former Mishawaka Brewing Company who used the four horsemen on the label of their red ale. Do any of the above tie into Four Horsemen Brewing? 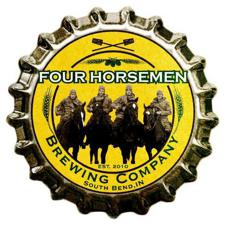 Roule: The picture we use in our logo is of the 1924 photo of the Four Horsemen of Notre Dame! When we purchased the used brewing equipment from Mish. Brew Co. we also negotiated a price for the FH trademark the owner attained for his Four Horsemen Irish Ale. We have no affiliation with Mish Brew Co. nor do we brew any of their beers. All of our recipes are designed by us and our Master Brewer. Mish Brew Co is now defunct and no longer brewing beer. We saw untapped potential in the Four Horsemen mark and how we could incorporate that into our brewery name! It is a great way to brand our beer and brewery which resonates with people locally and across the US. We feel it is a unique name for a craft brewery unlike any others out there.

We also felt that the legacy and tradition of Notre Dame football had a tie and correlation to our legacy and tradition in the beer industry. Our so-called beer heritage dates back to 1919. On our website (also below) you will see a 1919 photo of my Great Grandfather (from my mother’s side) delivering beer in downtown Chicago on a horse-drawn wagon. This was actually right before prohibition. The rest of the beer heritage comes from my father’s side of the family when my Grandfather bought a small beer distributor in Michigan City, IN in 1945. The rest of this story is on our website.

Keep in mind you don’t need to like Notre Dame to enjoy or drink our beer. There are many people who visit the brewery or we meet at beer fests and tastings that have no idea who the Four Horsemen of Notre Dame are and we are totally fine with that. Many of these people just think our logo is cool and enjoy our beers.

GDB: Let’s talk beer, Ben, specifically what you guys are brewing. What core styles are you brewing and are there any plans for seasonal, one-offs, imperial and the like?

Roule: Our core brands are the following available in draft and 6-packs; Irish Red Ale (this has positioned itself as our flagship and has won 2 awards), English Pale Ale, 9% abv Hop Rush IPA, Nitro Irish Stout (draft only) a CO2 bottled version will be hitting shelves in Indiana this late fall/winter.

We also started our Seasonal lineup this summer with a Spiced Summer Wheat Ale (brewed with Saigon Cinnamon, Curacao Bitter Orange Peel & Coriander then dry hopped on Cascade), we now have available our Headless Horseman Pumpkin Ale and this winter we will be doing a Ginger Spiced Strong Ale “Winter Warmer” (brewed with spices and Ginger) it tastes like Ginger Bread but warms you up with the 8.5 to 9% abv.

We also have a few other beers available here in the tap room but are aside from our core brands mentioned above. Our Long Beach Day session IPA is only 4.3% abv but is a Tap Room favorite for those hop heads looking for something to drink a lot of without over doing the abv’s, this beer gives a refreshing kick of hops and offers a passion fruit, mango citrus kick. This beer may make into our lineup down the road along with our Leprechaun Light Lager. Yes we are doing a light lager simply because there are still a bunch of light beer drinkers out there that want to drink the local brewery’s beer and this allows us to capture those drinkers and hopefully turn them onto the rest of our portfolio of handcrafted brews!

GDB: I’m somewhat familiar with the bars in South Bend (Corby’s, The Linebacker & even Moondog’s) but I am admittedly unfamiliar with the local craft beer scene in the area save for a few stores. How would you describe the craft beer movement there and how does Four Horsemen fit in?

Roule: Just like in most states across the US the craft beer scene/category has really taken off here in South Bend, northern Indiana and the state as a whole. We were the first to be up and brewing after Mishawaka Brew Co. closed their doors and the first full production brewery in South Bend since Drewery’s! Now there is a very small nano-brewery in Granger, a new brew-pub in Elkhart (Iechyd Da) and another upstart micro-brewery in Culver, IN. So we fit in great and have been well received. This area now gives the craft beer drinker some variety and fun local breweries to visit.

GDB: This may seem like an obvious question but why expand into the Chicago market?

Roule: Population, the craft beer scene and our locale to Chicago! Chicago is so close to us and offers so many opportunities to small breweries regarding increased volume and brand awareness.

GDB: I understand Chicago Beverage Systems, a wholesaler one beer manager recently told me has “stepped up its game” in courting craft beer, will be handling distribution of Four Horsemen. Why Chicago Beverage?

Roule: #1 I have known [VP of Sales Chris] “Red” [Ashby] for some time now and he is a stand up guy! #2 The MillerCoors “Chicago Cluster” (a band of MillerCoors distributors) offers streamlined logistics and a single drop point for our product. The cluster communicates and knows how to go to mark with new brands. These distributors train their sales teams on craft and continue to put the resources in place to grow craft! Also with CBS and the cluster they can cover the entire Chicago market for us when we are ready to branch out to the other distributors.

GDB: Where can people find your beer? What beers are available here? And in what forms (can, bottle, tap)?

Roule: We have only launched draft with CBS at this time and that includes our Irish Red, English Pale Ale and Hop Rush IPA. I don’t have a current report in front of me so I don’t know exactly what establishments currently have us on tap. But once I get that info I will pass it on to you (list provided by CBS below). We look to enter the CBS market with 6-packs sometime within the next 2 to 3 months.

GDB: Just for fun, Ben, what’s your favorite Indiana brewed craft beer? And do you have a guilty pleasure beer (mine’s Stag)?

Roule: Wow! Tough question….my tastes change daily so I don’t have just one beer that is my favorite. But some of my favorite Indiana Breweries are Iechyd Da, Bloomington Brewing Co. (I went to IU Bloomington) and I have to give some props to Sun King. They have some solid beers and I have enjoyed almost every beer I have tried from Sun King.

My guilty pleasure is Dirty Vodka Martini’s on the rocks (has to be really good Vodka). (Editors note: you had to outclass me, didn’t you Ben?)

According to Chicago Beverage Systems here’s where you can find Four Horsemen’s beers on tap: