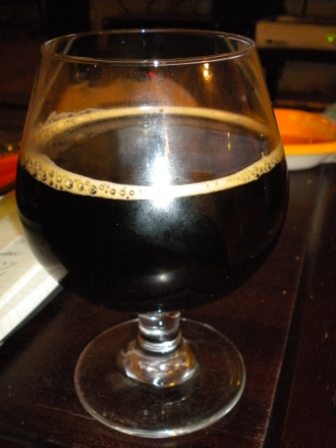 “Brewed in the authentic historical style of an Imperial Russian Stout, this beer is massive.  Intensely aromatic and heavy on the palate, this brew goes where few can – and fewer dare even try.”


Ryan: I bought a few bottles of the Stone Imperial Russian Stout last year with the sole intent of setting it back for a bit to see how the beer evolved & I was not disappointed. This may be, hands down, one of the smoothest Russian Imperial Stouts I’ve ever had. And it only had one year on it!

Loads of chocolate, toffee & a touch of hops in the nose. At first sip this beer is smooth. Velvety smooth. Frighteningly drinkable smooth.  There is just the right amount of carbonation and the finish is not too bitter.  Nice bit of cocoa, caramel and toffee in the taste.

This beer truly sets the standard for Russian Imperial Stouts.  I’m already excited to crack the other ’09 next spring!

Andrew: I love Russian Imperial Stouts, and this one did not disappoint. The beer poured, as expected, very dark with a small head. I noted that there was a very little carbonation, meaning it went down very smooth…maybe too smooth!

I was looking for a very boozy taste and smell to this beer but it just wasn’t there, a welcome surprise that it was so mellow. That allowed me to pick up some caramel/toffee/coffee flavors that I might have otherwise missed.

Karl: For an Imperial Stout, this was a lot lighter in body than I expected.  That said, it’s dangerously smooth – this beer goes down quickly and easily (and fill in your own “that’s what she said” joke here).

Mellow but still complex, and gentlemen, did I detect a little bit of peanut butter here?  I believe I did – and I liked it.

From The Cellar: Stone Imperial Russian Stout was last modified: February 6th, 2018 by The Guys