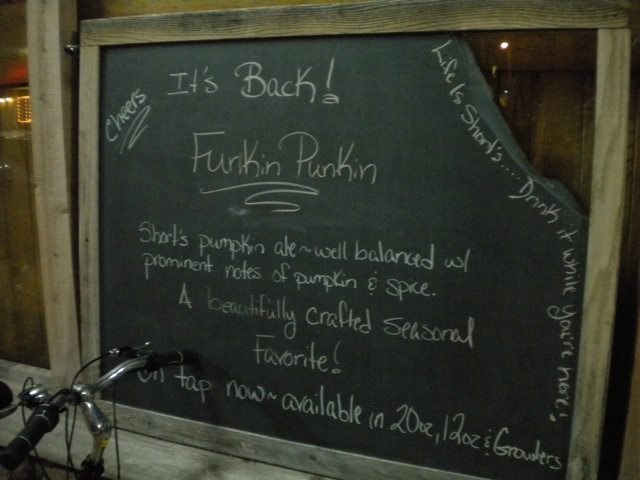 We’ve been threatening to do this for a while now, and it started somewhere around the time we poured our first pint of Pumking for the year a few weeks back. Now that we have found a few different styles and offerings from this years crop, rather than spread it out over 2 weeks of Pumpkinsanity posts like last year, we figured a cliffs notes version of these brews would work just as well for 2k11.

By no means is this all-inclusive. Hell, I haven’t even had this years Dogfish Head Punkin yet, and that’s traditionally the ne-plus-ultra of pumpkin beer releases. But here’s what we have been drinking this season:

Shorts Funkin Punkin: More than almost anything else this year, we were excited to get our hands on this. As you may have read, we literally went out of our way to drink it. And was it good?

Well, yeah, it was good. Was it a game changer? Naah. Solid flavors of gourd in contrast to the standard nutmeg/ cinnamon/ ale profile and a well rounded and balanced beer, but not a holy shit beer. Glad I got to try it, tho.

Tommyknocker Pumkin Ale: We got this brought back for us from Colorado and this was actually the faves of the year (for me, at least). It skewed closer to the “pie” side of things, sure, but it was bright, crisp and very flavorful without being too cloying or overpowering. Some pumpkin beers, you can only have two before our palate is thrashed. Not so with Tommyknocker’s. Practically a session pumpkin.

Shipyard’s Pumpkinhead: …which was just terrible. Nearly a pumpkin cider with a bare hint of cinnamon and spice on the back end; the rest was all water and sparkle. Avoid.

New Holland Ichabod: Nearly the same result as above, but not quite as bad – but don’t take that as an endorsement. Every year I try an Ichabod and think, well, this year it’s gotta be better, right? Wrong. Always bland, always boring. I’m not subjecting myself to this one next year unless New Holland management vouches for it personally. Or until it’s on special somewhere for like, two bucks.

Southern Tier’s Pumking: The undisputed heavyweight champion of pumpkin beers; no brew says “Fall is here” like the first tapping of a keg of Pumking. Not oktoberfests, not harvest ales, nope: Pumking. I type Pumking so often I actually mistype the true spelling of “pumpkin.” And this year was…um…

Well, look, it was great, and again, one of this years best, but somehow not as asskicking as last years, for whatever reason. Were the pumpkins grown to be a little less pumpkinny? Was there less spice? Less grain in the mash? Somehow this years was a little thinner, a little lighter, a little less “there.” And it still kicked the shit out of the rest of them.

Andrew: Hold the presses there, Karl. The shit has not been kicked out of all pumpkin beers we’ve had this year…enter a new, local brewery – 4 Paws Brewing. We got a hold of their seasonal beer, the Pupkin Ale, and I can honestly tell you that it was what I was looking for, but didn’t get, from this year’s Southern Tier’s Pumking. 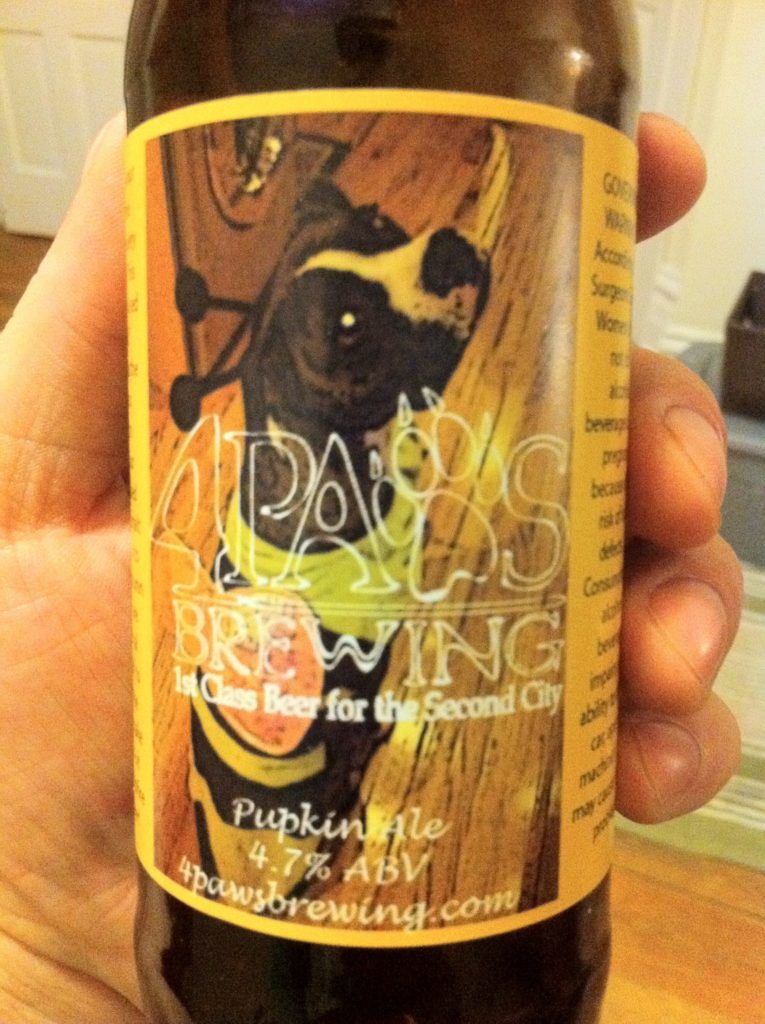 The Pupkin Ale pours a thick, translucent dark brown (looks like pumpkin pie) and gives you a nose full of all the spices that you’d expect – cloves, cinnamon, nutmeg, and allspice (smells like pumpkin pie). And yep, there it is, tastes like pumpkin pie – with a fantastic smooth, smokey, dry finish. This is what I’ve been looking for all fall, and I finally found it. One of the highlights is that I could probably sit down and drink 3 or 4 of these in an evening, can’t say that about many other pumpkin beers, including the Pumking.

If this is what I should expect on a regular basis from 4 Paws…bring it on boys, bring it on.

Now, on to the Schlafly’s… 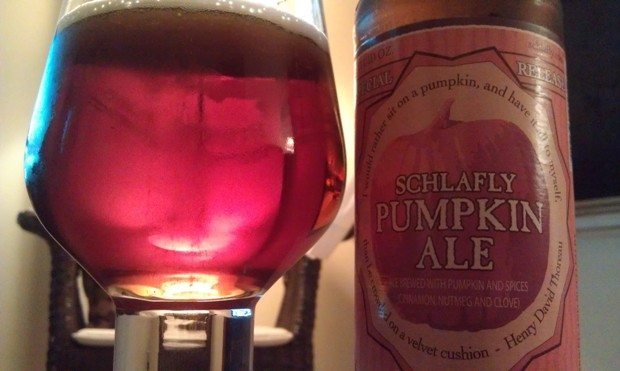 Gaze upon the Schlafly Pumpkin and fear it.

Ryan: If Pumking ratchets up the Pumpkinsanity a bit too much for you, the Schlafly’s Pumpkin Ale is right up your alley. The pumpkin pie flavors are there but are less in-your-face. In fact, they don’t come to you – you come to them. More on that in a moment. The nose of Schlafly’s Pumpkin Ale gives off a certain crisp, clean aroma that – for whatever reason – reminded me of shuffling through fallen leaves on the sidewalk as a kid.

At first sip you get the slightest tickle of cinnamon before a wave of pumpkin pie filling, graham cracker crust and an ever-so-subtle hint of whipped topping crashes in to your palate. It’s an ideal mix of clove, cinnamon, nutmeg and pumpkin pie flavors. Interestingly, the Schlafly Pumpkin Ale starts our rather unassuming, but it doesn’t take long for it to wow you – hence my reference to you coming to the beer. It is a bit thinner than the Pumking and It’s ABV is manageable for clocking in at 8%.

I would definitely pit this up against the aforementioned king of pumpkin beers and Dogfish Head’s Punkin in a Pumpkinsanity throw-down. And I think it might win.