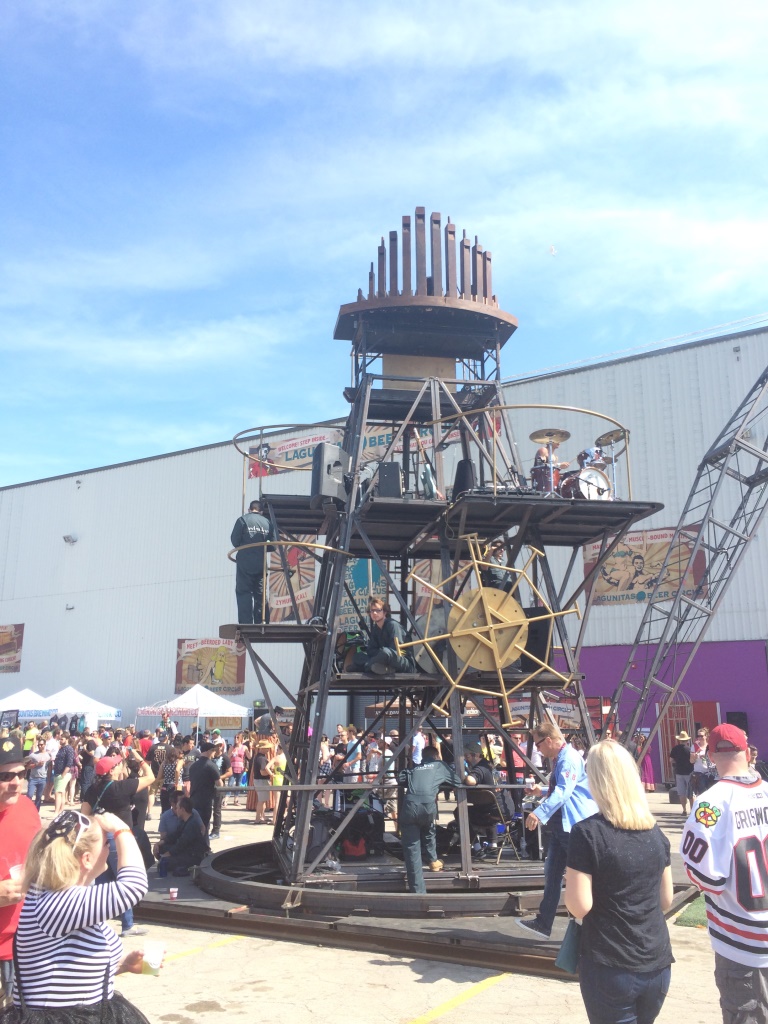 [NSFW Warning — A couple of the photos in this post get slightly racy.]

It seems almost unfair to categorize the Lagunitas Beer Circus as a beer festival. 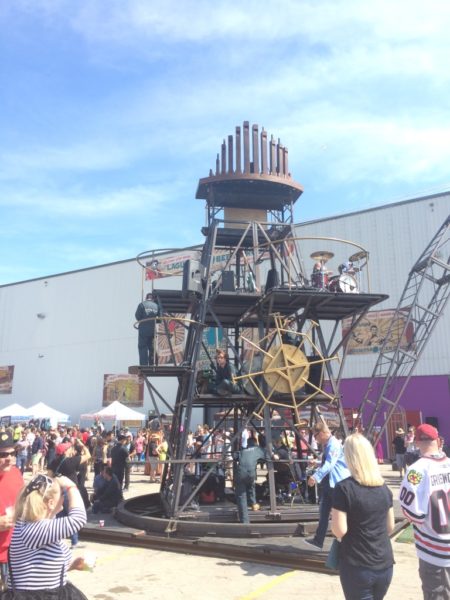 A beer festival, it ain’t. An incomparable festival of oddities, which happens to include dozens of taps of outstanding beer, it is.

Saturday marked the second time the Circus has come to 17th and Washtenaw. And in that time, it didn’t get any less bizarre – though it did get noticeably more crowded than last year’s inaugural event, judging by the overflowing parking lot and jammed neighborhood parking. The word clearly got out on those Lagunitas folks and their one-of-a-kind approach to celebrations.

But this wasn’t a beer festival. 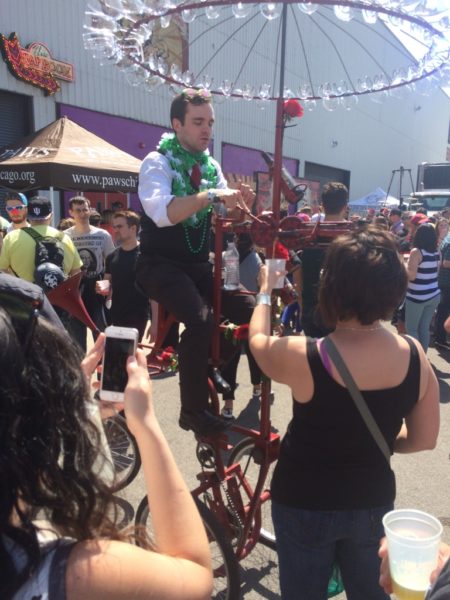 No standing in line for hours just to try one of the whalez, no checking the clock to ensure you were in the right place for that rare tapping at the top of every hour. It was just good beer, good music and good people (and insanely good people watching).

Amid the circus performers, stilt-walkers, acrobats, contortionists and magicians, there were a handful of tap stations – most noticeably the tractor-trailer equipped with 20 taps. And between the beer stands were quality food trucks and complimentary water coolers dotting the grounds.

That meant short lines and virtually no waits for pours of a Little Sumpin’ Sumpin’, IPA, Pils, Daytime and other quality Lagunitas standards. Finding the more limited Undercover Investigation Shutdown Ale and Equinox were an added bonus. It was a bit of an adventure to find the newly-released Citrusinensis Pale Ale “with 100% uncooked blood orange concentrate” and by the time I did find the right booth, it had been tapped. Call it an excuse to visit the massive brewery another time.

For the most part, it was wandering the grounds in wide-eyed wonder. After all, there aren’t many “beer festivals” where you get the chance to watch someone stop the blades of a box fan with his tongue – and then an even lower, more sensitive, extremity. Or observe a bit of sword-swallowing, right after a woman uses an electric sander to shoot sparks from her dangerously-close lady parts. Yes, the Philadelphia-based Squidling Brothers Circus Sideshow brought it all. 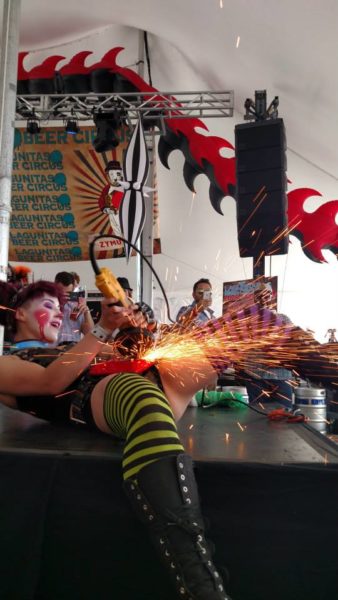 And so did Chicago’s Redmoon, hauling out their impressive “Performance Crane” once again – allowing musicians to jam out while twirling around on what can best be described as a massive, industrialized merry-go-round. Or something. But no one didn’t stop to take a look at their performances. 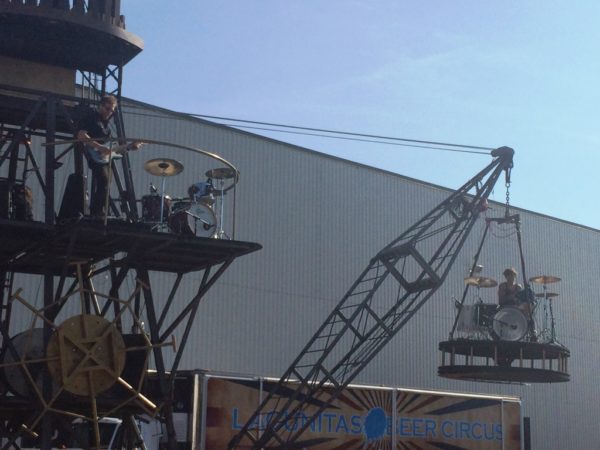 And no one didn’t stop to get a beer poured by the guy on the “kegway” or the guy on the vintage bicycle, whose gears were set to pour bottles for each of us. 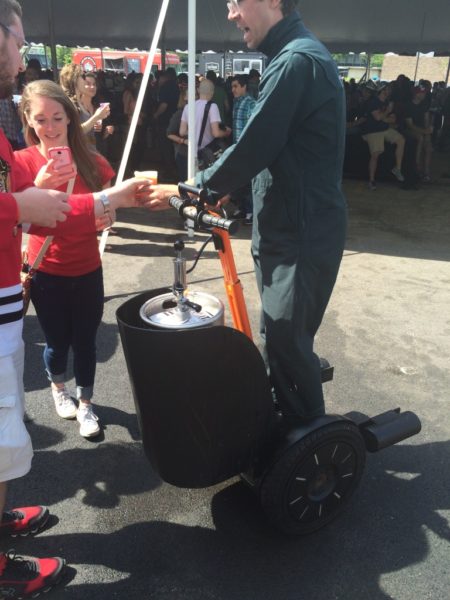 I even had a chance to grab a beer next to a man dressed as Jesus, with an inflatable pretzel around him, as a funky/punk band, Evolfo, jammed under a huge tent, while burlesque-attired women performed impressive feats on nearby poles.

You’re not gonna get that at the neighborhood beer festival, that’s for sure. 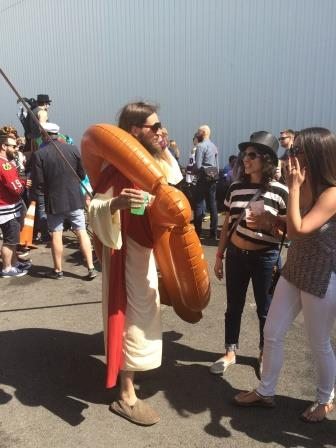 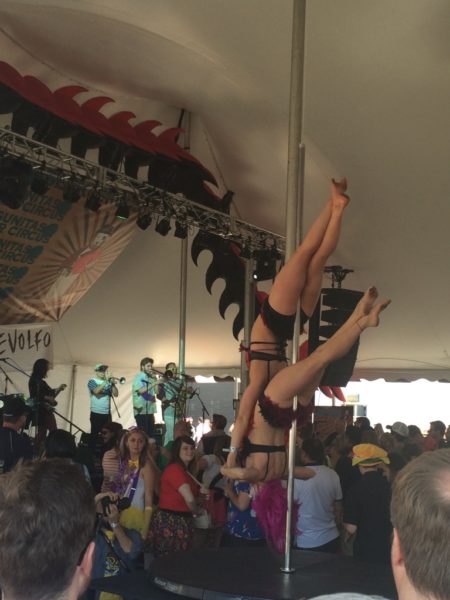 Though last year’s Circus took visitors through the newly opened warehouse, this year’s version happened entirely outside – and the weather couldn’t have been better for it.

It was a festival that few others would dare to do – there’s nothing safe nor PC about the Lagunitas Beer Circus. And that’s what makes it so memorable. It really does have to be seen to be believed. Though, as the festival shirts proudly boasted, your eyes “will see things they can not un-see.”

But the beer – and lack of lines or pretentiousness – sure makes it worth it.

The Lagunitas Beer Circus: Come One, Come All was last modified: February 6th, 2018 by Steve