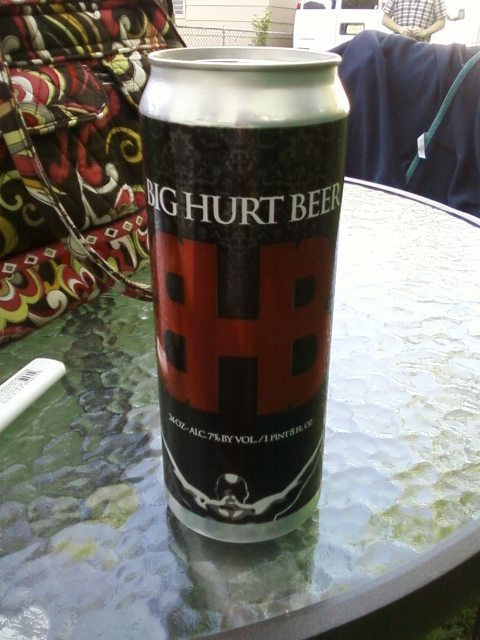 I’ve often toyed with the idea of doing a straight ahead review of Frank Thomas’ Big Hurt Beer, but to be honest, I figured you-all would think either a) I was trying to be an ironic smartass or b) none of you would take it seriously. But at the beginning of the month, I’ve noticed a couple other people offering their two cents including posts from SBNation and a site called TheClassical*, and I imagine the motivation wasn’t to actually review the beer, but rather just to take the opportunity to take a loose, easy shit on another sports-related promotional cheap put-your-name-on-this marketing device.

There’s only one problem: they’re wrong. Which is why I’m finally writing this.

For starters, this isn’t really a beer – it’s technically a malt liquor. It’s a hair-splitting distinction not worth mentioning, except to qualify it with this – I’ve spent years of enjoying the likes of OE 800, St. Ides, Hurricane, Lazer, Big Bear, Blue Bull, King Cobra, Mickey’s and Camo. In fact, back in those heady pre-9/11 days when you could transport liquids on planes, I once flew back from California with nothing but Country Club 40s in my backpack. Not to ring my own bell, but ding-ding, I might just be the most qualified reviewer of malt liquor swill around these beer bloggin’ parts. And as such, It has to be said that in all honesty, Big Hurt is NOT a bad beer.

A touch more context. What prompted my review here today is this: I jokingly asked Andrew to pick up a few cans of BHB one afternoon as we were on our way to Ryan’s for some backyard grilling. I didn’t expect Andrew to follow through, but follow he did, and upon my arrival there were 2 big silo cans of BHB with yours truly’s name on ’em. I didn’t expect anything one way or the other, honestly, but if someone brings you some cans of beer specifically for you to try out, even if they’re Icehouse Ice or Budweiser Premium Select Lime-a-Rita 42, you’re going to drink ‘em. And drink them I did.

Which brings us to the actual review of the beer: It’s a mostly inoffensive, somewhat watery, sweet and somewhat corny brew. It’s got just a touch of that gritty malt liquor bite that in other beers, gets right up in your face, as in a King Cobra, for example. But what it’s not is more important: It’s not poison. It’s not vomit. It’s not the beer equivalent of the guy that spit on your dog or punched your mom. It’s an average beer, being sold by a notable individual, and it’s an inexpensive vehicle for the 7% ABV to get into your system. It’s Bud Light Platinum without the multi-million dollar advertising campaign and blue, non-recyclable glass going for it. It’s not the greatest thing in the world, but for someone to spend 500 words falling all over themselves about how much it sucks is just not an accurate portrait of this beer.

And truth be told, out of all the hundreds of people I follow on Twitter, no one, no one hawks his beer with more enthusiasm and full-throated #BHB joy than Frank Thomas. Not Sam Calagione, not Greg Koch, not Tony Magee at Lagunitas (although he comes close). And Frank truly seems to love it. I don’t give a shit if the dude was a ballplayer (and one of the best to ever wear a Sox uniform), SBNation, the dude absolutely loves selling the hell out of his beer. You can’t help but respect the hell out of that. I got your back, Frank. Don’t let the BHB haters get you down.

To sum up: I didn’t love Big Hurt, but I sure as hell didn’t dislike it. In fact, I’d drink it again with no problem. Take this from a guy who will still occasionally crack a 40 of OE, if that makes a difference to you, but the bottom line is: it’s a beer. Don’t let anyone tell you it sucks just because of who’s selling it to you.

*This beer absolutely does not resemble anything close to Clear Creek Ice, because we drank that as well, reviewed it, and found it to be completely god-awful.