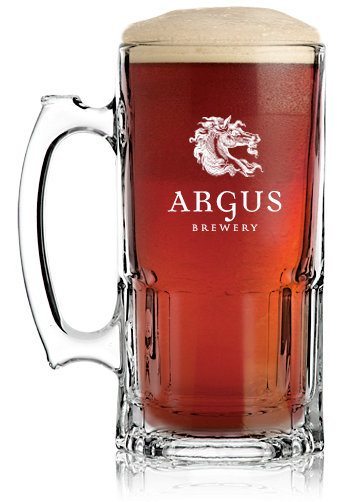 For almost two weeks we’ve been laying out the intricacies behind the proposals before the Illinois House and Senate that will shape the future of craft beer availability in Illinois. Today, we’re going to introduce you to one of two breweries in the state that distributes their own beer: Argus Brewery.

Argus’ first beer was not poured at their brewpub or from a bottle on a crisp fall night, but from the taps of the Ballydoyle Irish Pub and Restaurant in Bloomingdale, about an hour’s drive west of Chicago.  It was November of 2009 and the beer, McCaffery’s Irish Cream Ale, was billed as a Guinness alternative but lighter in body.  It was also brewed exclusively for the restaurant, which has other locations in Aurora and Downers Grove.  That’s how Argus got its start, brewing contract beers for restaurants.  They now have two other exclusively brewed beers; a red ale for Country House restaurants (Clarendon Hills, Lisle and Geneva) and a steam beer (think Anchor Steam) for Quigley’s Irish Pub in Naperville.  In the last year-and-a-half, Argus (run by the father-son team of Bob and Patrick Jensen) has added eight more beers to its portfolio including the popular American IPA, Pegasus.

According to co-owner Bob Jensen, Argus currently distributes about one-third of it’s beer – mostly in Du Page County – while a trio of distributors handles the rest.  But it wasn’t always like that.  In fact, Jensen tells us when they first got started they had a great deal of difficulty getting distributors to even return their phone calls.

“We had to go to self-distribution because no one was willing to sell it, ” said Jensen.  He called their attempts to sell directly to restaurants “very easy” and said the demand was there, and “we were greeted very warmly by retailers.”  While Jensen says there are benefits to using a distributor because they are able to get beer in to stores and restaurants that Argus couldn’t muscle in to on their own, Argus was able to get off the ground by distributing their own beer.

In fact, Jensen says if it weren’t for Illinois’ self-distribution laws Argus would not be in business today.  “We weren’t able to get their attention initially because we weren’t established,” said Jensen.  That echoes the sentiment of lawmakers sponsoring the legislation in Springfield.  State Representative Mike Bost (R-Murphysboro), a house co-sponsor of the measure, tells us that Argus’ story fits the intent of the legislation – to allow small breweries in the state to establish their brand and to get themselves a toehold, but not to have an unfair advantage.

If the legislature does not act on either House Bill 205 or Senate Bill 88 by the March 31st deadline imposed by a federal judge both Argus and Big Muddy Brewing will lose their self-distribution rights in the state.  Jensen says they have a contingency plan in place but chose not to elaborate – not that we ever want to have to find out.

Save THEIR Craft: Argus Brewery was last modified: February 6th, 2018 by Ryan