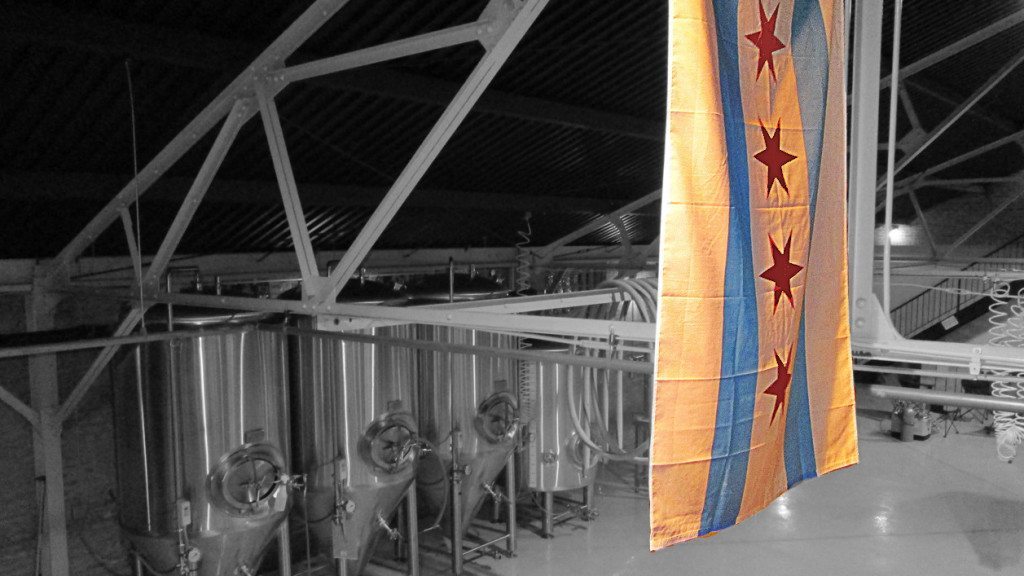 If you’re reading this, it’s likely that you’re planning to drink beer in Chicago. We have good news: Chicago is the best craft beer city in America (in our subjective opinion), with no shortage of great breweries serving up all kinds of beers.

Whatever your particular preference is, you’re almost guaranteed to find somewhere that will satiate that desire.

That being said, if you’re interested in prioritizing the brewery taprooms that you simply cannot miss on a trip to Chicago, we’ve got you covered. We’ve been covering the Chicago craft beer scene for over a decade now, and we’ve seen breweries come and go – so we know which ones are the can’t-miss destinations for great beers and memorable beer experiences.

If you want to make these decisions on your own, you should totally do so. We’ve created our own fully comprehensive Chicagoland Craft Brewery Map that lists every single beermaker, brewpub, beer bar, beer-friendly restaurant and bottle shop in town. If you want to find every place worth visiting to drink beer in Chicago and beyond, this needs to be your first stop.

If you’re visiting Chicago from out of town and don’t have a car, be aware that many of these destinations are well outside the normal tourist range of the Loop and the Magnificent Mile. Don’t worry – the El is pretty easy to navigate, rideshares are plentiful and you’ll be glad you got away from the city’s downtown.

Trust us. You’ll be fine. Here’s where you should head ASAP:

Metro is up first on our otherwise-unordered list for a few reasons: They’re Chicago brewery OGs, making and selling beer since 2009. They’re fully lager-focused and have been since day one, which makes them outliers to this very day. Their beer is excellent, and their taproom is amazing. Even though they’re a bit hard to find, you definitely need to visit.

Their glass-clad taproom and spacious outdoor patio is located on a gentle curve of the Chicago River, and it’s got the best brewery taproom view you can find inside city limits. Birds fly down the channel, boats and paddlers cruise past, and the antennae of downtown skyscrapers just peek out from above the treeline. On a sunny summer day with a liter stein of Heliostat or Stromhaus Helles, there’s nothing better.

Revolution dominates the Chicago craft brewing scene in terms of both volume and influence. They’re one of the biggest independent craft brewers in the nation and they fly that indie flag proudly. With go-to daily drinkers like Anti-Hero and Fist City on one side and world-class specialty brews like their barrel-aged Deep Wood series on the other, every beer drinker can find something in Rev’s lineup worth their while.

Revolution has two locations available, with the Logan Square brewpub being the most accessible. This sprawling space on Milwaukee avenue planted a flag early in the 2010s and many other brewers have followed suit including places like Hopewell Brewing, middle brow and Pilot Project all within walking distance.

For those who dare to travel to a more industrial part of town, head north to Kedzie Avenue for a beer at their massive production facility where thousands of barrels of Anti-Hero bubble away and racks of barrels soar to the ceiling.

Now that their original Lincoln Avenue brewery is in the hands of Hop Butcher, Half Acre has fully relocated all their efforts to their Balmoral Avenue production facility, taproom, patio, and kitchen. It’s a pretty well-hidden spot in a mostly quiet residential area which gives it a certain sense of zen that is hard to find at any other brewery in Chicago.

Do we have the same space in our heart for Balmoral we do for that original brewery? It’s close. Do we love all their beers anyways? The weird beers, the wild beers, and the perfectly hoppy beers? Yes. A thousand times yes. (And do we love stopping at Spiteful Brewery right next door before heading into Half Acre? Also yes.)

No matter what you feel about Goose Island’s corporate ownership (we’ve been agonizing over that since 2011), you owe it to yourself to visit at least one of their spaces in Chicago. The Clybourn brewpub is where it all began – it went through a revamp after Anheuser-Busch took it over, and it lost a lot of the English pub-y warmth and charm, but hey – it’s still the birthplace of Bourbon County Stout and other less appreciated classics like Honkers Ale and Mild Winter.

Their Fulton Avenue taproom is probably a little more accessible if you prefer to stick closer to downtown; no shame in that if you’re visiting Chicago from out of town and don’t feel like heading into Lincoln Park when you’re already over in the West Loop. Fulton is another reliably great place to find a BCBS variant pouring regularly, along with some experimental ales that might see a wider release further down the line. You’re also very close to other breweries including On Tour, Midwest Coast, Great Central and District Brew Yards.

If you’re looking for a brewery that’s doing things that nearly no other beermaker will dare to try, Off Color is for you. Off Color hit the scene in 2013, and in that time, they have never made an IPA. (They made a pale ale once. That’s as close as it’s gotten.) What they do make is thoughtful, artful, delicate beers in styles you’ve probably never heard of, let alone ever tried. Then they put those beers in barrels, foeders, and puncheons; ferment them with wild yeasts and age them on hard-to-find fruits and ingredients.

The boundaries of beer get pushed every day, but few push them as hard as Off Color. And they still love a pastry stout, too – their annual DinoS’mores release is a high point of the Chicago beer calendar. They have a production facility which offers tours, but for pours from the source you need to go to the Mousetrap in Lincoln Park. If you’re staying in Old Town or on the north side of the Mag Mile, this is just a few minutes away via Uber and well worth the trip.

If any brewery in Chicago can rightfully lay claim to a freak flag flying high, it’s Marz. When your flagship beer is a tea-infused wheat beer and you crank out CBD beverages, n/a drinks, shrubs, liquors, and coffees on top of your wide array of double IPAs, sours and stouts? This place doesn’t just think outside the box, they don’t even know where the box is.

It’s another well-hidden brewery, too, tucked in an industrial corner of Chicago’s near South Side. If Bridgeport is the Community of the Future (as owner Ed Marzewski has been known to proclaim), Marz makes a strong case for being the brewery of the future, too. The taproom is one part arcade, one part art gallery, one part beer-lovers dream where everything feels just a bit off-kilter, all the way to the brewhouse sitting well below ground but still viewable from above.

If you’re already on the north side near Wicker Park and want to get a taste of the Marz experience, they also have a tiny brewery space and taproom called the Life on Marz Community Club where you can also sample their wares.

One of the other breweries on the very short “we don’t make an IPA and never have” list, Dovetail focuses largely on European-style lagers from crisp pilsners to creamy hefeweizens to a perfect Helles or Kolsch. They also are one of the rare breweries to also make spontaneously-fermented lambic-style beers that age quietly in hundreds of barrels above the taproom; if you’re ever cruising through North Center on the Brown Line and you see a space to the west steaming away, it’s probably Dovetail’s coolship.

Their taproom is among the friendliest in the city, and they’re part of the Malt Row scene where you’ll find nearby beermakers like Begyle, Empirical and Cultivate by Forbidden Root plus beer stores like Bottles & Cans and beer-friendly restaurants like the Bad Apple. Still, once you have a pour of one of their lagers, especially in their biergarten on a warm summer’s day, you’ll likely not feel any real need to leave.

Pizza & beer is a classic combination, and while middle brow doesn’t serve up deep dish (yet) it’s worth the trip to their bungalow to dine and drink. When it comes to grain-based food and beverage, this team is full of savants: the beers are great, the bread is amazing and the pizza came out of the gate so strongly that Chicago magazine named it the best in the city just a few months after they opened.

If you’re getting a real neighborhood-focus vibe from the bungalow, you’re picking up on the right stuff: beyond just food and drink, they also offer a community-supported goods program and a 12-week apprenticeship program to teach underprivileged kids in the area hospitality skills as well as life and self-management skills. Oh, and they have coffee in the mornings, they make wine, they host shows for bands that they collab on beers with, and they’re just generally some of the most thoughtful, considerate and forward-thinking folks in town.