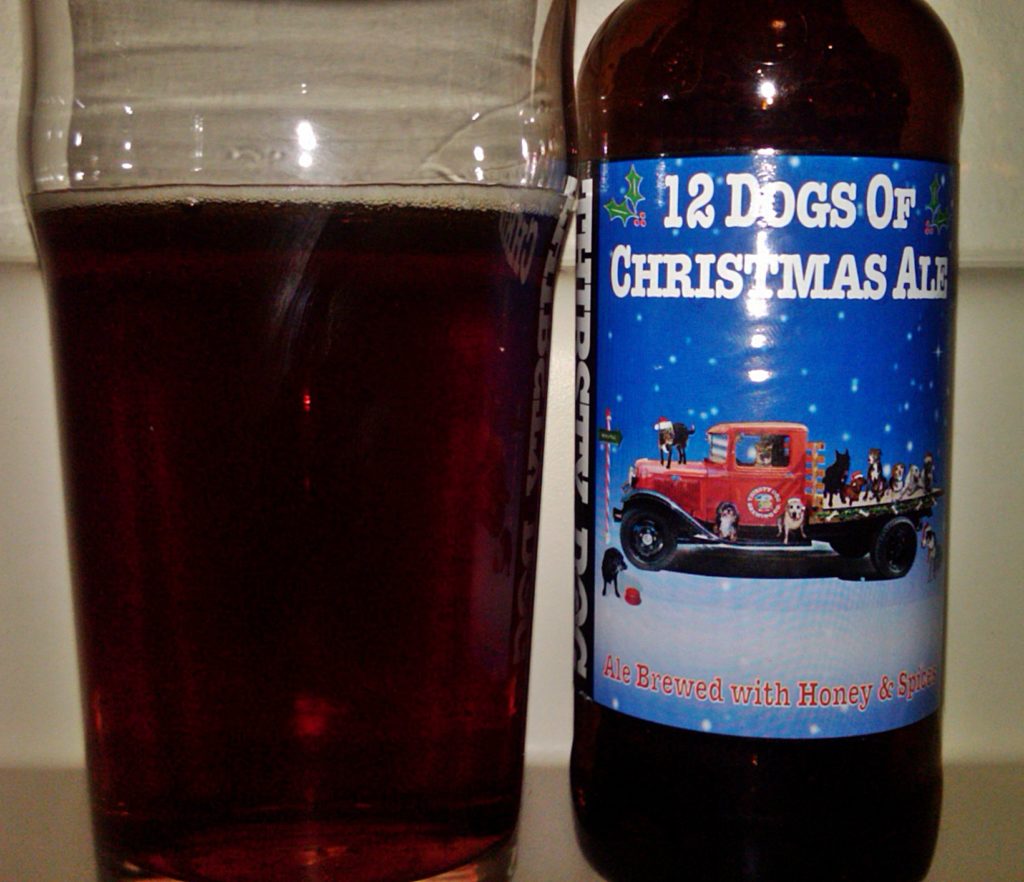 “Spiced for the holidays with honey, cinnamon, ginger, nutmeg and Santa’s secret recipe.”

Three weeks ago I never had a desire to try this beer. In fact, I had never seen this on shelves before – at least not in Chicago.  I had seen Thirsty Dog’s beers at the beer stores I visit in Michigan but never thought twice about picking one up or sampling one of their offerings. It wasn’t until I had a brief chat on twitter that piqued my interest about this winter warmer. Apparently there is a debate raging amongst Clevelandites, Clevelandvilians, Clevelanders…people in Cleveland over which is better; 12 Dogs or Great Lakes Christmas.  Knowing my love and adoration for Great Lakes Christmas Ale I had to track down 12 Dogs to see how it stacked up.  Last week while in Michigan for work I had a chance to sample Great Lakes Christmas Ale on tap and found – after an extensive search – a lonely bottle of 12 Dogs of Christmas.

The front label reads, “Brewed with honey and spices.” It sounds similar to GL Christmas from that description alone.  But, I should give this a fair opportunity and not compare it directly.  So I won’t.

The 12 Dogs pours a deep and dark copper in color with, maybe, a pinky finger’s worth of off-white head.  The nose gives off very robust aromas of cinnamon, ginger, allspice and nutmeg.  It’s just like opening a fresh tin of homemade Christmas cookies.  Take a sip and you get strong flavors of ginger and cinnamon up front followed by a bit of graham cracker.  The ginger forces its way back in to the finish along with a bit of maltiness or nuttiness.  Whichever it is, it’s pretty subtle.

Now, I know I sad a few sentences ago that I would not compare it to Great Lakes Christmas Ale – but the two are very similar.  There is a little “something” to the 12 Dogs that sets it apart, though.  I’m not sure if that’s the nuttiness that I picked up on or not – but there was something different to it.

Overall this was a fantastic beer and a great winter warmer.  Consider myself schooled on another great beer coming out of Ohio.  This will be on my short list to pick up next winter seeing as how I grabbed, what appears to be, the last bottle in the greater Lansing, Michigan area.