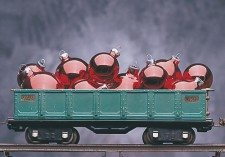 “A holiday ale brewed with honey and spiced with fresh ginger and cinnamon.”


I’ve been trying to figure it out for weeks; “what does this beer remind me of?” After ordering this beer on tap nearly a dozen times this winter it finally hit me. Great Lakes Christmas Ale is my mom’s Christmas cookies in a bottle. There’s no doubt about it. Now, I know what you may be thinking, “it’s made with ginger and cinnamon so it’s supposed to taste like Christmas cookies.” That may be true, but I taste the thin red and green sprinkles that she puts on her sugar cookies. Sometimes, I swear I even catch a burnt edge of a cookie that stayed on the sheet too long.

My most recent Great Lakes Christmas Ale was poured from the taps at Dusty’s Tap Room in Okemos, MI.  Arriving in a mug with a rich copper in color, the beer gives off aromas of ginger, cinnamon, cardamom seed, allspice and honey.  Take a sip and an all-out-Christmas attack on your palate begins.  The Little Drummer Boy leads cinnamon and ginger into battle followed by Toy Soldiers flanked by nutmeg, allspice and honey.  The flavors are big and bold with this beer.  There is absolutely nothing subtle about it.  I think I like the finish best, though.  You get a nice splash of graham cracker pie crust that very reminiscent of Southern Tier’s Pumking or Short’s Key Lime Pie.

Mike, the guy who brewed this kick-ass pumpkin beer told me Great Lakes Christmas Ale tastes like the brewers crumbling up gingerbread cookies and threw it in to the boil.  You know what?  I kind of have to agree with him there.

This is a world-class winter warmer from Great Lakes.  They truly trapped the essence and flavors of the holidays in a bottle.