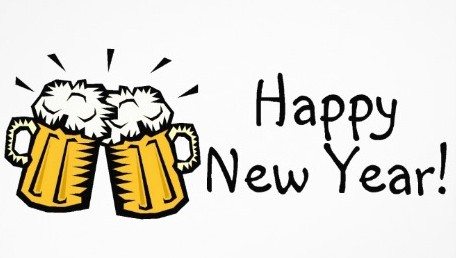 A new year is a new opportunity to not just spend too much money on a gym membership you won’t use in 3 weeks or buy a bunch of quit-smoking patches that’ll just give you a ton of weird dreams (seriously, they make sleepin’ craaaaazy) – it’s a good time to reassess what one might have done over the past 12 months that could use a little adjustment.

In that mindset, here’s a few thoughts on where the last year of beer has taken us, and what may or may not be coming up next for all of us respectively. There are about 51 weeks left to this particular trip around the Sun, and the hangover from the 1st has just about cleared out of our brains, so let’s start thinking ahead for our New Beer Resolutions:


KARL: I’ve lived in and around Chicago my entire life and in the city proper for about 8 years now, and I doubt there’s been a busier year for the local beer industry in Chicago since the start of Prohibition. First, let’s all try to keep this year just as busy.

My year ended with me actually meeting some of you that I’ve been smartassedly tweeting at for 18 months, which has been fairly rewarding. I’d like to keep building that habit if at all possible. Writing for online is often done by digital committee rather than any sort of real collaborative project and as such is easy to get stuck in a tunnel of your own creation. As such, this year I’d like the opportunity to buy a number of people a beer or two and bend their ears.

On the heels of that comes a desire to make it to more beer events. I’m usually happiest sitting at the end of an uncrossed bar in the early afternoon sipping a drink, but part of this whole thing is to be out in the world and see whats going on. The next FOBAB is a must, and maybe even a Hoptacular or something like that. We’ll see.

Beyond that is an overarching intent to provide more regular content here, and by that I mean of all kinds. We’re pretty good at finding beers that are weird or unavailable around here and all that, but I’ve been meaning to write up things that might be a little more relevant. My always-pending review of Walgreens’ Big Flats, for example, and a few hundred words on Busch Light in cans and Costco ‘craft beer’ and all that. I’ve been threatening it for a while, time to follow through. You’ve been warned.

Oh, and seriously, I’m going to quit writing about Shorts so much. (If I can.)

ANDREW: I want to visit at least 5 new beer bars. We are all creatures of habit, and as such we find ourselves visiting the same, familiar beer bars over and over again. Well, this year I need to broaden my horizons and find new (to us, anyway) beer bars to enjoy the best craft beers available. That might mean an extra 10 or 15 minute commute, but I bet it’ll be worth it.

I also want to tour the local breweries. We are kind of spoiled by having a ton of awesome craft brewers in the Chicago area. So this year, I need to make it a priority to tour and write about their breweries. So, Half Acre, Revolution, Two Brothers, Finch’s and others, look out because here we come.

RYAN: First and foremost, I want to get caught up. I have a stack of reviews, interviews that need to be done and content ideas that I really want to get to but either haven’t had the time or haven’t made the time. This ties in well with a personal resolution to be better organized and manage my time better.

This also dovetails in to something similar to what Karl mentioned; developing and writing more unique and original content. I have some ideas and the three of us as a whole have some ideas; now we need to put fingers to keyboards and put them in to action.

Most importantly, this year, I want to stop being so damn serious about “limited release” beers. Frankly I would like the craft beer community as a whole to take it down a notch or two, but I suppose it should start from within. It is just beer, after all. And beer is supposed to be fun. In the past a new, one-off brew just hitting shelves in “very limited supply” had me frantically calling stores or running (quite literally) to my nearest beer store to pick up my one bottle allotment. Sometimes I would find what I was looking for, but most times I wouldn’t. Hell, sometimes I would even travel to other states looking for limited release beers that had already sold out in Chicago. But that isn’t fun. It’s stressful and not very rewarding most of the time. This year, I’m taking back the fun.