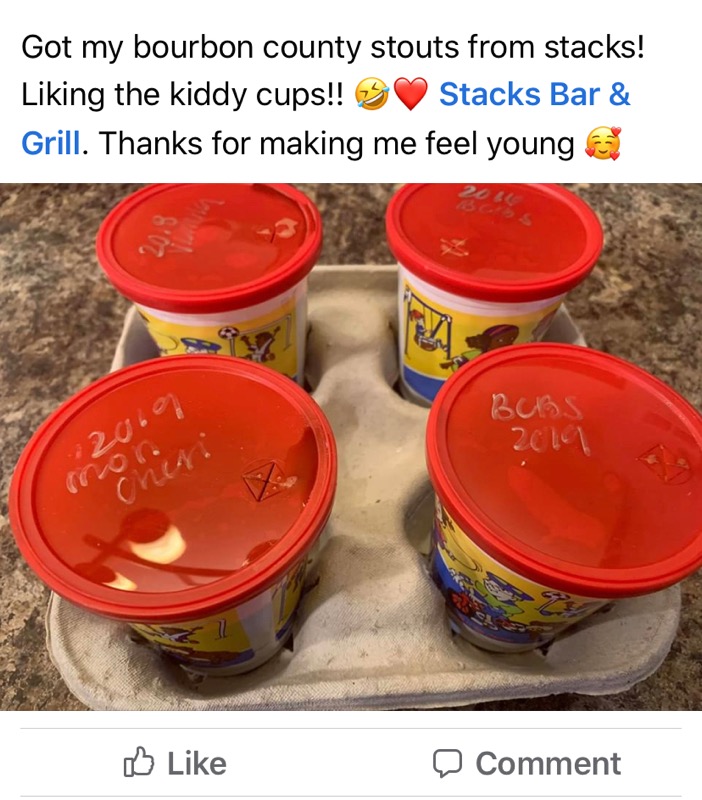 It’s no secret that restaurants, bars and breweries are turning to new ways to get their draft beer out of their kegs and into the gullets of customers before it goes out of code and heads to the Hand Sanitizer Fairies.

One bar in Valparaiso took that to new territory in the past few days: BCS Kids Cups. Yes — selling plastic kiddie-sized containers of Bourbon County Stout.

We were wandering the social media sites recently when we saw this play in two acts pan out, between Stacks Bar & Grill and a consumer.

What were those sealed containers, you ask? Your toddler will recognize these…

Yep — that’s one of each variant, including 2016 OG Bourbon County and 2018’s divisive Vanilla BCS, served up like chocolate milk. It must have been a popular option — because as of today it’s out of stock.

(Also, I don’t know what Purple Drank is, but for $7 I’d try it. Along with as many $4 crowlers of that Old Nation DIPA as I could get. Holy hell that’s a deal.)

I mean, one one hand, this looks like a nice local place and we’re not trying to shit on anyone out there trying to make a buck with the high-value beer that they’ve got sitting on tap.

But … at the same time … we want to make sure that breweries are somewhat aware of what people are serving their beers in.

I do hope that the purchasers of these “sealed containers” are being asked to consume all those BCS kids cups ASAP for the sake of the beer. And also, if anyone in Valpo has added a one-bottlecap rating for any of these beers in the last few days? Shame on them.

Creativity is the mother of beer distribution — other places are turning to “single serving growlers” to move 64oz. pours of beer around Chicagoland, too — we spotted these beers heading out the door over the weekend as well:

Fountainhead Market is definitely not the only place we’ve seen selling these single-serving growlers. And at $10, I bet they’re pretty popular! But I’m going to go ahead and doubt that those seals are top-quality, and 2-3 days of lifespan seems optimistic at best. Please remember to drink your growler beer on the same day it’s poured if you can!

It’s definitely better that those beers get drank rather than dumped. But please … take a moment to review our Growler Buyer’s Pledge if you’re picking up apple juice containers filled with draft beer.

Have you seen any beers to-go approaching the level of BCS kids cups? Tell us on Twitter or Instagram! And drink those things ASAP!