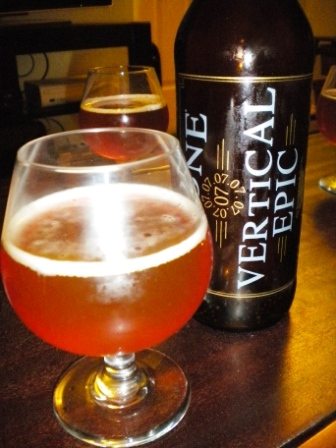 “As with any good epic, herein lies the promise of larger-than-life experiences, heroics, and twists & turns as the adventure unfolds. This bottle conditioned ale is chapter 5, and is specifically designed to be aged until sometime after December 12th, 2012. Provided you can wait that long.”

Karl: When we do these Vertical tastings I have to remind myself that we’re not really comparing apples to apples here. In some instances it’s almost apples to internal combustion engines, as is the case here when we went directly from the ‘06 Vertical Epic right into the 07.07.07, which on its face doesn’t seem too extreme. It’s transitioning from a Belgian Strong Dark Ale to a Belgian Strong Pale Ale. What’s the big deal, right?

Where the ‘06 is earthy and rich, the ‘07 is bright, spicy, and…minty? Sounds like a chewing gum, doesn’t it. Oh, it’s much better than that. Brewed with a decent amount of ginger as well as various citrus fruit peels included as well, you expect a certain amount of zing to this beer, even after a 3-year-stint in the cellar. And it was certainly there, after pouring a light copper color with a very minimal head.

In addition to all that was a definite spearmint profile, a flavor I last stumbled across in the Naughty Girl Stout at Right Brain and I’m consistently surprised it doesn’t show up in beer more often. Maybe it’s because people don’t want to confuse their beer with their mouthwash? Could be – but I’ll remind you that good alcoholics know that mouthwash can get you plenty drunk as well. Just FYI.

More From GDB:  Get Into The Spirit; Bacolympics at Paddy Long's

Despite the insistence that There Would Be Cardamom, I didn’t get any of that on the palate – perhaps that’s a taste that dies off quickly leaving no blockade to get in front of the mint and ginger. If that’s the case and it’s what you’re up for, I’d suggest breaking this out now. I’m worried that when we revisit this in the future it’s going to have lost those characteristics and we’ll be left with a saison/tripel blend that’s just bitter citrus peel – and that’d be a shame.

Also, continuing the trend of “Karl tasting crazy shit that no one else seems to recognize or is able to find:” I distinctly tasted some caramel and burnt marshmallow, but since I’m the only one who did so, take that with a grain of salt. But I swear it was in there. Scouts honor.

Ryan: Burnt marshmallow? Seriously? If I hadn’t known Karl for years I’d think he’s making it up. But, for whatever reason, he has a knack for picking out an obscure flavor profile in a beer.  I, on the other hand, have a knack for writing less and less after each beer that we review in a given night.  This was the second-to-last beer of the evening and, while my review took up 7 lines, there were only 15 words there.  That’s a hair over two words per line.  Enough about my inability to express my beermotions on paper.  On with the review!

I was a little skeptical of this one if you must know the truth.  How well could a pale ale, albeit a “Belgian Strong” one, hold up in the cellar?  The answer; pretty damn well.

Loads of mint and ginger in the nose of this beautifully copper colored beer.  Plenty of ginger loads up the palate as does a mix of citrus fruits and spices.  I also caught a bit of raspberries in the aftertaste too.  This beer is a bit heavy in the mouth, thick and syrupy.  I like it.  It has more of a wheatwine feel to it than the Saison/Triple that Stone intended.

Much like Karl, I’m skeptical that the flavors of this beer will hold up a few more years.  But we’re going to keep that last bottle of 07 stashed away until December 2012 anyway.

Andrew: The 07.07.07. Vertical Epic poured a very light red/orange color with no head at all. The nose was all ginger, citrus and a hint of mint, I was intrigued.

Once I jumped into this beer spicy citrus flavors took over – just fantastic – lots of orange with hints of honey, ginger and mint. There was also bit of bitter and boozey burn on the back end of the 07.07.07.