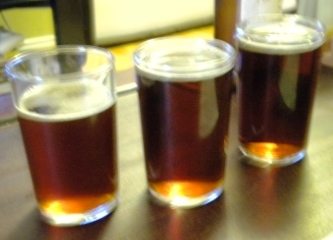 “Frozen in the cellars over a powerful twelve week fermentation. You hold an elegant riot of bittersweet sherry and dark fruit earthy notes. Warm and expansive it will fill your senses. Great for contemplative sipping now or lay down for an elegant occasion with friends.” 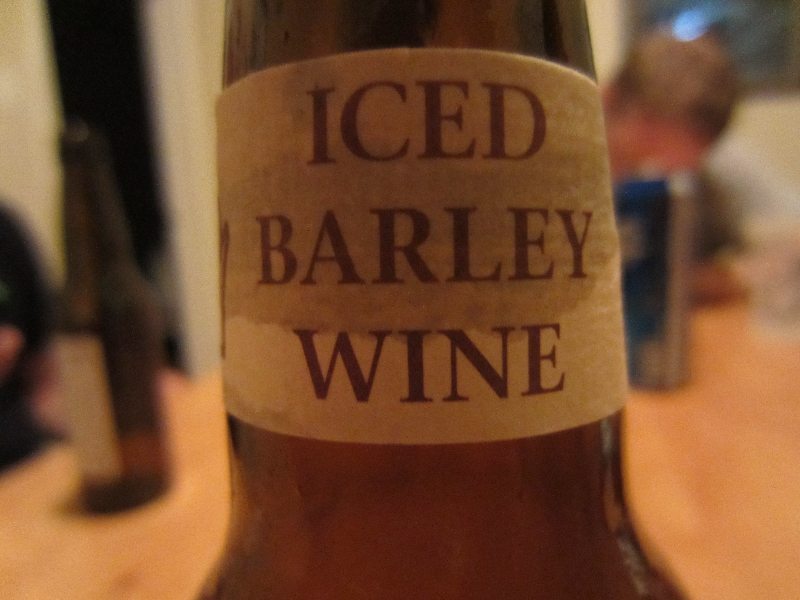 
(Editors note: we’ve stockpiled enough New Glarus Iced Barleywine to review it every-so-often to see how it is developing, aging and changing. Feel free to read through from the one year tasting to the most recent review. However, if you’d like to jump around, be our guest, and read more about New Glarus Iced Barleywine after one year, three years and five years in the cellar.)

Karl: At first glance, without opening it at all, this is an extremely dangerous beer. Why? Because the bottle looks like every single other New Glarus Unplugged series beer, so you might grab one of these out of the cooler on accident and get hammered with the 13.5% ABV out of nowhere. That’s a nail in anyone’s coffin. And after that it just gets more intimidating.

On first taste, the only thought in my head is “Holy hell, is this boozy.”

There’s no hiding the alcohol here, no subtle coverings or heavy flavor distractions. Straight whoa-boy booze. It’s also sharply hopped, no citrus, very dry. It gets a touch of coriander and spice as it opens up, which it had plenty of time to do. And a little soapy, in the way you get on your palate the first time you try an IPA. It’s the only thing your taste buds know at that point and it’s what it tells your brain to recognize it as – maybe this beer is taking my tongue back in time or something. It’s the only explanation.

Beyond that, it’s really a fight to put this down. Between the 3 Guys being poured about 4 oz a piece, we all stalled out on this one pretty significantly. Funny that my brain says “because it’s called an iced beer, it should be wet, right?” Nope – dry, dry, dehydrating-ly dry. This is almost a one-and-done kind of beer. Putting down two at a sitting would be a phenomenal feat, and not recommended for anyone who lacks experience.

Andrew: The 2009 New Glarus Unplugged Iced Barleywine poured a very pretty ruby-red color with little/no head at all. The nose overtakes you with a fruity, boozy earthiness and immediately I can tell that we have a sipper on our hands.

The taste was spot-on with what I picked up in the nose – slight booze, malt, earthiness and a bit of fruit. This beer finished incredibly dry and slightly bitter, prompting me to write down in my notes that, “I need water.” No one got through this beer quickly, and I’m not sure I could finish an entire bottle by myself but man was it good. Yet another home run by New Glarus.

Ryan: I first got my hands on a bottle of this in a trade when it was first released.  I loved it fresh.  The hops were explosive and the booze was evident, but not completely overpowering.  Still, it seemed a little raw.  So once I got my hands on a few more bottles I decided to throw them in the cellar for a while and see what happens.

Boy, did we unleash a monster with this one. One year in the cellar didn’t do a damn bit of good for this beer. Don’t get me wrong, it’s very good, but it has not mellowed out one bit.

The New Glarus Unplugged Iced Barley Wine pours a ruby-red to murky brown in color. Obscene amounts of booze and port fill the nose.  This is a sipper. As Karl mentioned, this beer is hoppy but it’s a dry hop flavor – earthy. There are also hints of sherry or port and plums on the palate.

This one took us a while to finish. There were times all three of us just stared at our respective 4 oz samples, unsure of what to do next. Imagine if one of us had a whole bottle to ourselves?

I think this beer needs a little bit more time in the cellar.

Ryan: Two years. TWO. That’s how long it’s been since we cracked open a bottle of New Glarus Unplugged Iced Barleywine. During our first tasting, with just a year in the cellar, we were a mere three sips in when we decided this beer needed more time in the cellar. And not just one year, but two. It was barely drinkable then. Too hot, too sharp, too…everything.

So here we are; four of us sitting around our 3 oz tasters. That’s right four of us, because last time we could hardly cut it with three. And at three years old and the New Glarus Unplugged Iced Barleywine still packs a menacing punch.

The nose is full of dark fruits; baskets full of plums and cherries. It smells sweet, slightly sour and boozy. And the latter is what hits you right away when you take that first sip. This beer is so hot, even after three years in the cellar, I nearly gagged. After a good 10 seconds of coughing I was able to get past that shock to the system and found some pleasant, albeit rich, flavors akin to dry sherry. There was a subtle nuttiness, some butterscotch, Ricola candies, dates, figs, and cherries – topped off by an unexpected tartness in the finish.

The earthy hops that we pinned down two years ago were long gone. And while this was remarkably boozy, it lessened in intensity with each sip we took. That probably means it burned off half my taste buds, but whatever.

I can’t really say I enjoyed this beer, but I didn’t exactly dislike it either. This one is turning in to more of a novelty beer to crack open; which we’ll do again in another year or two – or maybe even three.

Andrew: How can a beer with three years on it still be a, as I noted, “a hot mess”? Not really sure, but it still delivers quite the wallop. And while I didn’t struggle nearly as much to finish the New Glarus Unplugged Iced Barleywine this time around, I still don’t think I’d want more than 3 or 4 oz at a time.

The nose was full of caramel malts, some dark fruits and, yes, the aforementioned booze.

While it wasn’t nearly as hot as it was during out last tasting, it still burned. It burned bad. And as Ryan noted the hops have totally faded, giving way to a candied sweetness allowing the beer to finish a bit funky and tart.

I liked this cellaring experiment, it’s been one of my favorites so far – while I’m not overly enthusiastic with the result, it’s been interesting to watch this behemoth of a beer develop.

Karl: Man, you just never know what’s going to happen with these things.

For example, I had zero expectations that this beer, after 3 years, would end up with these weird tart and vinegar-y undertones to it. No clue that it would have bizarre hits of menthol to it. That it would be like a beer version of some sort of digestif.  Like aperol, for example. And oh, the booze. Straight to the head with this one.

It’s a marvel of chemistry and the dimension of time, and that’s why we do these crazy cellar experiments. Who the hell else would figure this stuff out? 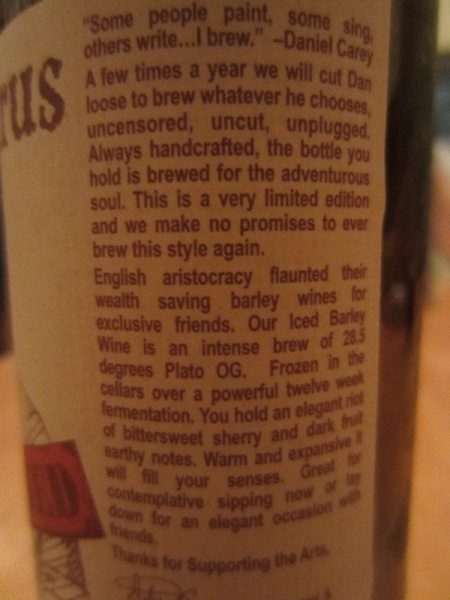 Ryan: This beer and the Dark Horse 3 Guy Off The Scale have been intrinsically tied together for years, at least by me. These beers were purchased around the same time, bottled around the same time and typically came up for a tasting on the same night. It’s been that way for the last few years. If we sampled a 3 Guy you can bet the New Glarus Unplugged Iced Barleywine was sure to follow. And this most recent tasting was no different.

Both of these beers had garnered a reputation as being harsh, boozy and sometimes barely drinkable. The 3 Guy did a 180. Would the Iced Barleywine follow suit?

The best way to describe this beer after five years in the cellar is meek; at least compared to how aggressive this beer has been in year’s past.

The nose is limited; perhaps there are a few dark fruits dancing around. The body still carries some heft with flavors of cherry cough syrup and Belgian candied sugar. There’s a good amount of dry sherry in the finish as well as a lengthy alcohol burn.

The complexity from year’s past is a distant memory but so is the abrasiveness. There is still one bottle in the cellar, which I may sit on for a few more years — just for the fun of it.

Karl: Remember all that herbal, aperol, medicinal-ness that I said was popping around in the last year’s look at this one? Well, it’s full on aggressive full-speed-ahead spearmint and menthol now, and it is weird. Somehow the alcohol burn has backed off from this, and it’s otherwise like swigging cough/cold syrup off the bottle, cut with Everclear perhaps.

Thankfully, as this one warms, it evens out somewhat, but the magic of beer chemistry is still on full display with this one.