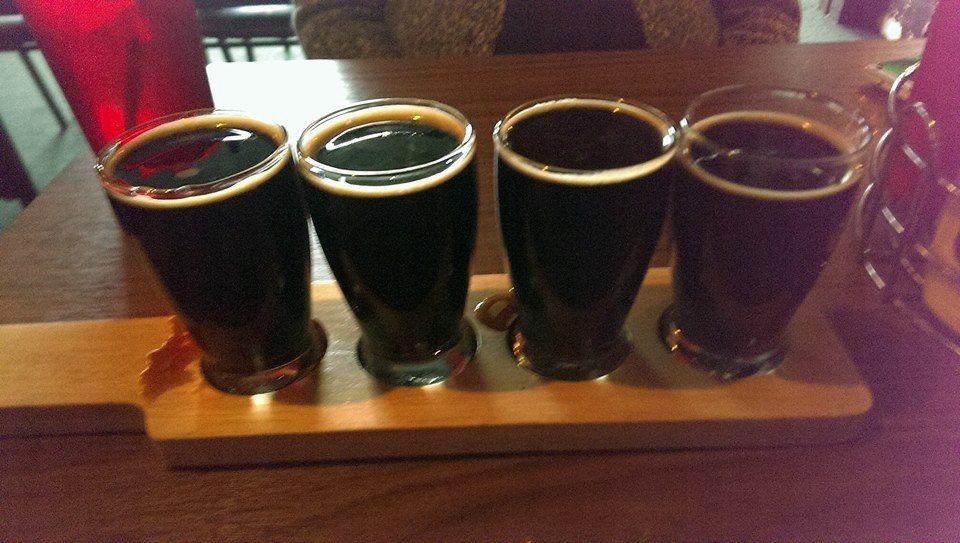 While many of you spent Black Friday waiting in long lines outside bottle shops, calling every beer store within a 50-mile radius or driving from liquor store to liquor store hoping to cobble together a four-pack of Goose Island Bourbon County Stout 2014, I was comfortably seated at Crunchy’s in East Lansing, MI sipping my way through a $12 dollar flight of four pours of Goose Island Bourbon County Stout. The flight included 4 oz pours of 2014, 2013, 2012 and Coffee 2014. What follows are brief tasting notes and overall impressions of each.

By far the most alcohol-forward, Goose Island Bourbon County Stout 2014 has a lengthy alcohol burn that lingers from start to finish. Layered underneath are equal parts creamy milk chocolate, vanilla bean ice cream, room-temperature coffee and a dash of brown sugar. The ever-present bourbon is no more overpowering in the finish as it was at first sip — but it is most certainly there.

The bourbon takes a bit of a backseat in a year-old pour of Bourbon County Stout, allowing similar flavors to a fresh pour to gain some traction. Palate highlights include Milk Duds, French vanilla coffee creamer, plums, sticky toffee pudding and a dose of bitter coffee in the finish. The bourbon lingers on the back-end and the heat isn’t quite as harsh as a fresh pour.

Dry and smokey is the name of the game when it comes to a two-year-old pour of Bourbon County Stout. The alcohol present in a fresh and one-year-old pour has backed off nicely and a rich smokiness has emerged to compliment flavors of a chocolate milkshake, vanilla creme brulee, molasses and a distinct woodiness. The bourbon hits you in the finish but doesn’t have nearly as long a tail as it did in the two fresher pours.

Perhaps I’ve had my fair share of barrel-aged beers or maybe I was a little bourbon-ed out at this point, but Bourbon County Coffee Stout 2014 was by far my favorite of the flight. The bourbon lingers in the periphery, allowing the onset of a light roasted coffee with a touch of creamer to fade into sharp espresso flavors mid-sip finishing with notes of sweet molasses and cream cheese frosting. Bourbon County Coffee Stout bordered on cloying, pushing it to the brink but not crossing the threshold.