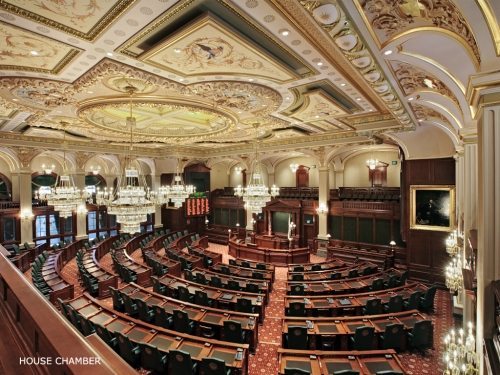 Follow along as the Illinois legislature convenes in Springfield with a pending vote on tweaks to the Illinois Liquor Control Act and 3-tier system of alcohol beverage distribution in the Illinois House.

House debate rages on but our live-blog is going to close up shop. We will update accordingly if something newsworthy happens.

House still going. Waiting, ever so patiently, for HB 2606 to be called for a vote.

Lawmakers are trickling back into the House chamber after the Democrats caucused for about an hour and 20 minutes.

Word is firearm conceal/carry legislation could be voted on today.

This is typically done to discuss key legislation and to ensure votes are there for passage, everyone is on the same page, etc.

House Democrats are going to caucus with plans to return around 2pm.

HB 2606 adds yet another co-sponsor. 64 members of the House now publicly support the bill. 60 yes votes are needed for passage.

Here’s a video of the aforementioned shouting match: https://new.livestream.com/blueroomstream/events/2022229/videos/16661313

Lawmakers are currently debating pension investments and gun manufacturers. So far debate is less lively than the gun debate yesterday, which erupted into a shouting match.

The amendment is a floor amendment meaning the amendment will be added into the record prior to debate. The bill will not have to go back to committee for a vote.

Procedural update on HB 2606. An amendment was filed on the bill yesterday and that amendment has been approved by a House leadership committee today.

HB 2606 would prohibit a brewer from owning a distributor, something Anheuser-Busch has done in Illinois since 2005.

The big news pertaining to this bill, HB 2606, is that Anheuser-Busch has agreed to sell off its minority interest in distributor City Beverage by 2015: https://www.guysdrinkingbeer.com/abdi-touts-across-the-board-support-of-3-tier-system-legislation/

The House is due in now and unlike yesterday our streaming feed is present and accounted for.

We are going to crank up the live-blogging machine for a second day in anticipation of the 3-tier system bill being called for a vote in the Illinois House.