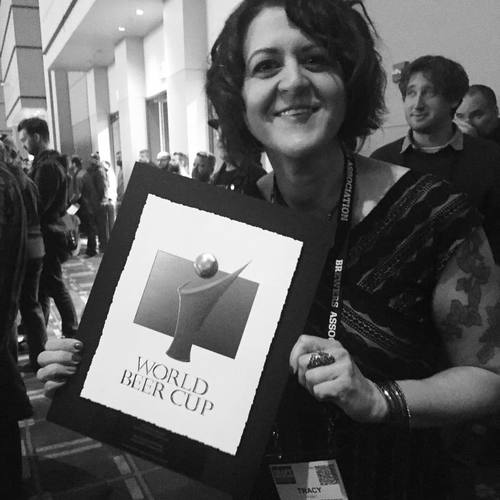 Metropolitan’s Tracy Hurst on growler fills: “I believe that bars should be able to sell growlers of beer”

As part of our efforts to learn more about how Chicago area breweries feel about bars and restaurants pouring their beer into growlers, we reached out to Metropolitan Brewing’s Tracy Hurst to add her voice to the conversation.

Her comments were more than just a quick email response, so we thought they merited breaking out into their own separate post. You can find our larger conversation about growler fills here, and Tracy’s comments follow:

“I believe that bars should be able to sell growlers of beer.

Honestly, once you send your beer off to an account, those risks [of growler pours] exist no matter what. You have accounts that maybe don’t take care of their tap lines. Or clean their glassware. These problems exist no matter what. I’ve gone to accounts [where they have Metropolitan beer on a line] after a raspberry saison and you can taste it. Honestly, when I try to sell a tapline and I see Not Your Father’s Root Beer on tap…I tell them don’t put it on that line. Because that line is ruined.

Whether the patron sits there and drinks it at the bar or takes it home with them — you always run the risk of your beer being misrepresented. It’s part of the job. Sometimes I say things [to accounts] like, what’s your line cleaning protocol? The bottom line is sometimes your beer gets placed in places that don’t represent it the best. I’ve been to places where I’ve found my beer out of code. All I can do is pull it off the shelf and get the distributor to pick it up.

With growlers…because it’s going to be a new development, I think part of the new discussion — and Metro is not part of the guild, my thoughts are not influenced by what they are doing — they’re already making as part of the conversation that people are taught that you take it home and you drink it.

Someone buys a six pack at the store, I want them to buy it before it’s out of code. Will they? I don’t know.

So there’s only so much control you can delude yourself into thinking you have. If a bar is going to serve growlers…I think the bars that jump on board with this for the most part are going to have the conversation one way or the other. Be it on the menu or face to face. I don’t see any risk greater than the risks we’re already running by doing our business.

And, I am a production brewery owner. The fact that people can go home with my beer in 32 or 64oz. servings? Of course I like that.”

More info about Metro’s beers can be found on their site here.