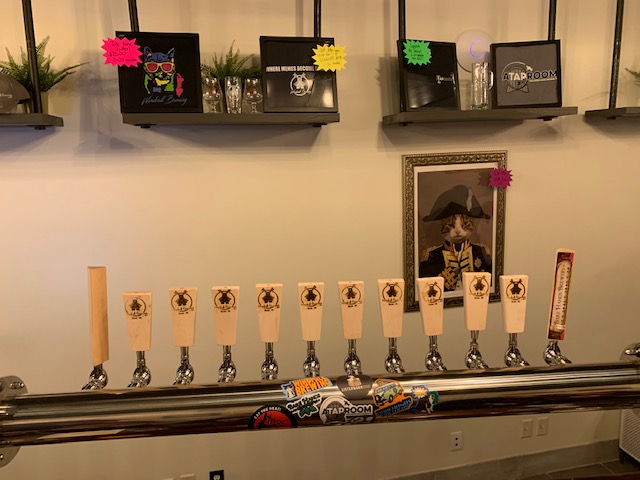 We’ve all had those FOMO moments with some of our favorite out-of-town breweries.

The taproom-only special release you’re missing out on. The rare bottle they’re opening. Easy access to their merch and beer-to-go from the cooler in the corner.

All of which makes A Taproom in Indianapolis one of the most unique concepts we’ve experienced yet.

Every month, the small neighborhood beer bar on the city’s North Side converts itself into a new satellite taproom for breweries that have limited – or zero – distribution in the city. They’re leveraging years of industry relationships with both breweries and distributors to make it happen.

The taps. Merch shelves. Beer cooler. Glassware. Coasters. Coffee that is local to that brewery. Wall art. Snacks. All of it is supplied by a new brewery every month.

Last week kicked off a month of A Taproom transforming into a satellite taproom for Northwest Indiana’s Windmill Brewing, which is the only Chicago-area brewery on the 2021 calendar.

And yes, Midwest breweries have so appreciated the concept that A Taproom has fully booked their 2021 calendar — and they’re already scheduling breweries for 2022.

The bar is balancing their takeovers with respected-yet-hard-to-get Indiana breweries like Windmill, Bare Hands and 2 Toms, while out-of-state breweries like Cincinnati’s Listermann and Streetside, as well as Perennial and Narrow Gauge out of St. Louis are also on the calendar.

Breweries are selected based on years of relationships developed in the industry by owner Xavier Randall and other partners, whose credo is “if we wouldn’t drink it or recommend it as being quality, you won’t find it here.”

For May, that means the art on the walls, t-shirts for sale, glasses and coasters on the bar all feature Windmill’s popular taproom cat, Luther. Their Two If By Citra IPA, Luther Paws seltzer, El Gato Lima lager and Seismic Toss double pastry stout are all among the 8 Windmill beers on tap.

They also collaborate on a beer only available on draft at the home taproom and A Taproom. This month, that means Relative Strawbearing, a 6% strawberry-jalapeno gose that is a bit tart, has a bit of heat but remains completely crushable.

And as you’re drinking one, it’s easy to stumble into a conversation with a stranger on the stool next to you as you both wonder aloud “why the hell didn’t anyone think of this before?!”

They say they kicked around the idea over a few beers at first. When the former Koelschip taproom for Central State Brewing became available, ideas suddenly became an opportunity to become a reality. A Taproom works with Craft Roads Beverage, a new and growing craft distributor in the state, to assist with delivery of the out-of-market beers.

Another unique twist to their operation? Medical Professional Appreciation Day.

Last week, they opened at 7 a.m., to accommodate those third-shift workers who just want a beer after work. They’re planning on opening early once a month, even inviting patrons to buy a “thank you” beer during the week for those medical professionals who visit that morning.

A recent weekend visit found a crowd of Windmill fans inside (masked responsibly) and on the outdoor patio, getting pours of beers they struggle to find in the city, while leaving with equally elusive four-packs from the cooler. Add to that a friendly, enthusiastic and knowledgeable staff and we’re making it a “must stop” for future Indy visits, maybe even going out of the way for some of those coming in the months ahead.