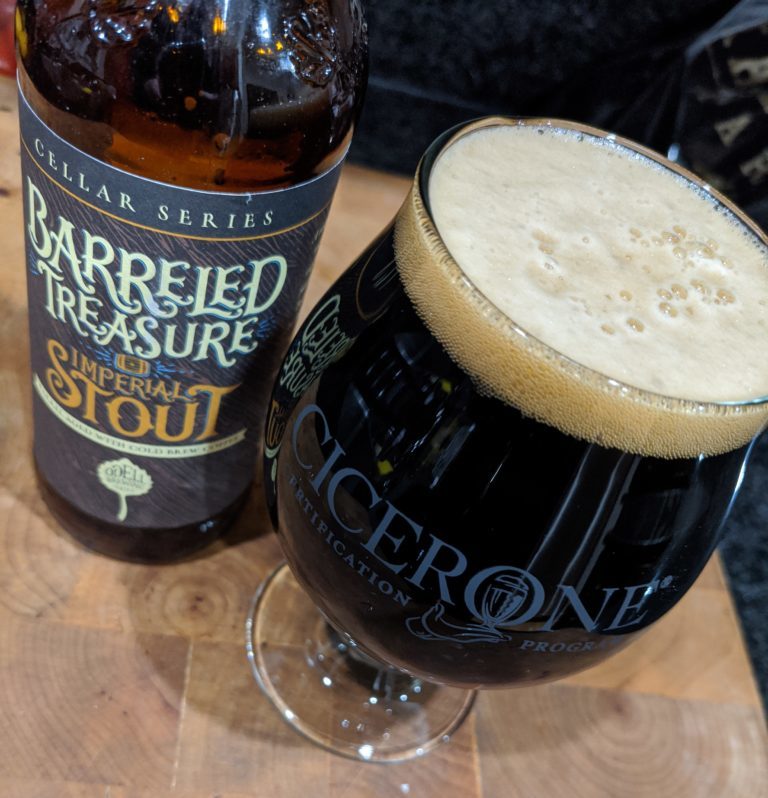 We’ve been on the mailing list for Odell’s for a while now, and for the most part the beers they’ve sent have been solid — if nothing I’m running to the store for.

I’ve enjoyed their Sippin’ Pretty fruited sour a time or two, and the Drum Roll hazy pale ale is pretty nice, if not also similar to a few thousand other hazy beers around the country. That said, other beers like the Cloud Catcher Milkshake IPA have missed the mark while beers like the Green Coyote Tomatillo Sour … well, I applaud them for taking big swings at crazy flavors, but I won’t be coming back for it any time soon.

And yet here we are — celebrating my final beer of 2019 with my first review of a new decade. Because man, did Odell’s Barrelled Treasure oak-aged imperial stout hit the spot in a way that other beers haven’t come close to lately.

I cracked this open around 9pm on an intentionally slow December 31st, thinking I would just clear out a little space in my fridge for New Year new beers. This one’s been hanging out there for a while, next to another hazy IPA from another local brewery, next to a beer more notable for its packaging in an 8oz. can than anything else.

Their Barrelled Treasure, an imperial stout aged in bourbon and rum barrels and infused with cold brewed coffee, could have overdone it in any one of those directions. Good news: it didn’t.

The beer poured thick, rich and dark with a light khaki-tan pinky-nail thick layer of head, with lots of rich, roasty notes on the nose backed up with some bitter bakers chocolate. It’s not a “still” beer, as there’s a little fizz of carbonation but nothing too bright, and the body was definitely thick and syrupy — but not so much so that it was overwhelming or impeded any drinking. (Though I’d say it walked right up to the line of it.)

On the palate, I honestly didn’t think of this as a “coffee stout” at the outset, though that coffee ground roastiness did carry through to the flavor. That bitter chocolate got nicely sweetened into vanilla and milk chocolate swirls thanks to the barrel with no acidic tannins slipping in there. Somewhere just before the finish I got a little pop of plum and even some licorice before fading away to more chocolate maltiness, brown-sugar molasses and a final zip of roasted malts.

Sometimes you can just taste things like “maturity” and “restraint” and “balance” — most of these things are dirty words to younger breweries who are only looking to blow out the margins wherever they can … but every now and then you’re reminded of a brewery who’s been fighting the good fight for longer than most, and know how to make a beer that’s well rounded, complex and still fun to drink.

As noted above, Odell’s Barrelled Treasure was provided by the brewery for … well, we don’t know entirely why but we have a feeling it was for reasons like this. Looking for more barrel-aged content? We’ve covered plenty of Goose Island Bourbon County through the years here.