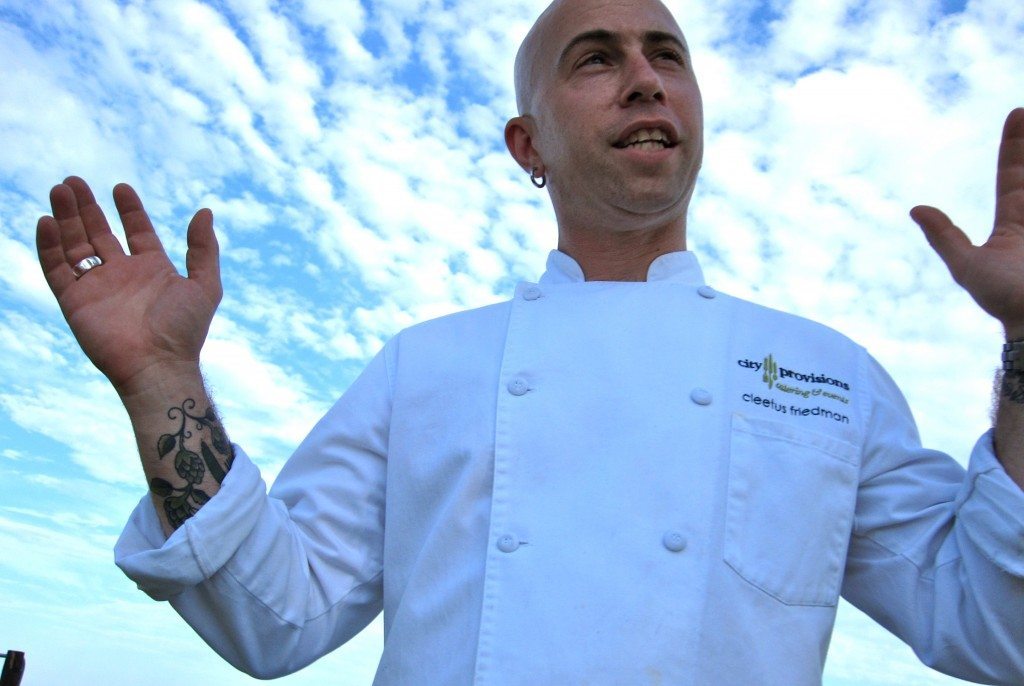 When chef Cleetus Friedman announced that he was closing City Provisions, his locavore-focused sustainability mecca that was the home of many of our favorite brewery/chef collaborations, it’s safe to say that much of Chicago’s fooderati and beer fans were both shocked and saddened. For six weeks, a city watched and wondered, where will Cleetus end up next?

Will he keep his brewery collaborations going? Will his farm dinners continue? Will he host Check, Please? Will he open a new spot with more foot traffic? All those questions and more were tossed about, and a little over a week ago, we got our answer: Friedman would be taking over as executive chef of one of our favorite craft beer bars in the city: The Fountainhead.

We wanted to know a little bit more about the transition, the beer collaboration plans, the restaurant’s global focus, Ayn Rand and Check, Please – and Cleetus was generous enough with his time in the middle of basically rewriting the entire menu (but not all of it, more on that later) to spend answering a few of our questions.

GDB: You know,when I saw the news break from Time Out Chicago, that you had landed at Fountainhead, I immediately (and I think a lot of other people thought this too) thought that it was really a perfect fit.

But what I also thought about was, that at City Provisions, you really were running the show over there. So has it been different, or better, to be just focusing on one aspect of the business, in the kitchen, and do you think that might be something that you’ll strain against at all in the future?

CF: It’s funny – out of all the questions that have been posed to me so far, nobody’s asked me that question. You know, when you’re running a business, especially a business like City Provisions, there’s so many things going on that it’s hard to…the goal is to surround yourself with great people that can carry your vision out. That’s what made CP in the eyes of the community, was that I had so many great people working for me.

When I take one of those things and pull it out and for example, my focus on food, like you’re saying, and I put that in a place called Fountainhead…I’m able to put 100% of my energy into one thing. And it is easier, although it’s a big challenge right now, because I need to…literally 180 degrees, I gotta turn this place around. But I’m able to focus all of my energy on one task.

And it’s been invigorating. It’s once again inspiring. And, I’m able to also spread my wings a little bit and work with a lot of different breweries, and scotch & whiskey makers a lot more than what I was doing at City Provisions. Fountainhead has a global focus. So I’m able to focus globally, but cook seasonally and locally, if that makes sense.

GDB: You mentioned in this recent Eater piece that you were looking forward to brewing a collaboration with Stone. That kind of surprised me a little – your reputation is one of working with very local Midwestern breweries, and with Stone being on the west coast, do you think being at Fountainhead is allowing you to kind of relax that discipline a little bit?

CF: Well, I’ve always worked with Stone. When Aaron from Stone approached me about getting Stone on my shelves, much like Oscar Blues did, I said to him: I need ten things that you are doing for the environment that’ll make you fit into our model here, not being local.

And Aaron spent six hours with my staff, with a DVD of all of their sustainability practices…and the fact that they have a farm, and source from that farm for their pub, and the water reclamation and their solar panels and everything they do kinda blew me away – the things that Stone does for the earth are far above and beyond 90% of the other breweries out there already.

So they earned a space on my shelf, so I had a great relationship with them, and now I’m on a stage where I can move a lot of beer. I’ve been talking about doing a collaboration with them for a couple of years but they haven’t had the capacity.

Well, now they might start doing that, so the relationships that I’ve built are really…there’s even more of a stage to play on with those, if that makes sense.

[It’s at this point that your humble correspondant remembers picking up a bottle of Stone’s Belgo-Anise Russian Imperial Stout at City Provisions, and feels slightly stupid for not putting 2 and 2 together. But I’m over it now.]

GDB: Let’s talk a little more about those beer collaborations. What plans do you have for those moving forward?

CF: I’m brewing every month. One of my goals for the next six months was to take all these smaller new breweries and to do beer collaborations with them…and help them grow. Like, Begyle Brewing, 18th Street Brewing, Pipeworks, Spiteful, even Dryhop if they want, but being at Fountainhead now, there’s a huge  market and a huge awareness for the beers.

So while I’m still brewing with Dark Horse and Greenbush, I’m going to be brewing with Rev Brew this fall…I have a real opportunity to use my reputation with my collaborations and put a spotlight on the people that nobody knows about.

When I did Terminator X with Greenbush, nobody knew who Greenbush was…that was two years ago…look at — I’m not saying it’s due to me, but look at Greenbush now. They can’t make beer fast enough, they’re blowing up, they’re building a huge brewery.

So I’m still brewing with them  – I’ve got Loudmouth Soup on tap at Fountainhead  now – I’m lucky to have 3 beers in their canon while they’re so busy they can’t do another collaboration.

GDB: You mentioned the global vision of the restaurant, and it’s interesting that you’re getting to stretch out in those newer directions – have you had a chance to discuss with Mike [Maloney, new beer director at Fountainhead] where your visions are headed for both programs?

Because you’re both in a very unique position – to take a well known destination, and really be able to take it and make it into something which I think has the potential to be even better than it was before.

CF: I agree with you and I’m glad you see it that way. I think ownership is investing in that, with not just bringing me on board…but they’re making some other changes to really help catapult Fountainhead to the top of Chicago’s gastropubs.

I haven’t spent enough time with Mike yet, however the ownership knows my focus, and that I want to create a menu that highlights the beverage program, not just the beer program. We will be training the staff to understand pairings with my food and have suggested pairings for everything on the menu, whether it’s paired wines, paired whiskey, sherry, whatever the case may be. It could take 6 months, but I’m gonna help them get there.

GDB: Where are you at with the food menu?

CF: The menu that I’m working on is basically designed to have people walk through a Fountainhead experience, with food and beverage that’s not limited to size or course. It’s meant to be seen as an entire menu with the ability to order small or large portions of many different things, and really start to share and eat communally, whether you’re with 2 people or 20 people.

GDB: When I hear what you’re describing, it’s almost like you’re taking Fountainhead back to their day-one menu which had sections labeled “Sharing” and “Not for Sharing.”

CF: I had no idea that’s what it used to be like until just now! [laughs] But when you go to a place like Fountainhead, people don’t go [when they’re] in a hurry to see a movie, they go to hang out, they go to drink and talk – it’s a pub! You know what I mean? It’s a gastropub. It’s a gathering place.

Whether that’s from a creative standpoint behind the bar or in the kitchen, it’s also a place where, you want to come hang out with friends, you want to have some drinks – my goal is to have that experience transcend into the food menu now. And let the food be a part of the Fountainhead experience.

We want an actual experience. We want you leaving with a wholehearted experience with food and drink and conversation and community. When I go out to eat, that’s what I want do.

GDB: This is a random question that just came to me – have you ever read the actual novel, “The Fountainhead,” by Ayn Rand?

CP: I have not. And I have not for a few reasons: A) [the name of the restaurant is] not an Ayn Rand reference, which is interesting – I asked that the other day. B) I’m not a big Ayn Rand fan. And C) any book that I’ve read in the past 5 years have been cookbooks! I’m ten pages into Steve Jobs’ book, I just don’t have time. So, no I haven’t. [laughs]

GDB: It’s been a pretty busy past week for you in conjuction with the Fountainhead news and the Check, Please finalist announcement – with your work at the restaurant, are you still hoping to land the host gig, or are you thinking that you might want to narrow your focus to just running the kitchen at Fountainhead?

CP: No, I think I’m on the same page as everyone at Fountainhead: I’m gung-ho about hosting Check, Please. In fact, it could only serve to do all of us that much better. It’s not a huge commitment, so it’s not like it’s going to take me away – it’s like 7 days of shooting, and it’s once every other week or something – it’s not a lot. It just so happens that you film like 2 or 3 episodes each time, and they wind up running those episodes all the time.

So it could only serve to heighten and elevate the awareness of what we’re doing.

GDB: For a while I was thinking that maybe there would be a perception that it’s not fair for a chef to run a show where the entire focus is reviewing other chefs, and would there be a conflict of interest there – but then I realized, Alpana [Singh] was with Lettuce Entertain You that whole time, and no one seemed to have much of a problem with that.

CP: Right. How is it different? You’re the master sommelier at Lettuce, what’s the difference? I think that’s what Check, Please wants – they want someone who understands the industry. They don’t want some tire salesman who doesn’t know what a mirepoix is.

GDB: My final question, and it’s actually more of a request – would you please tell me if they monkey bread is going to stay on the menu? Because that’s the one thing I order every single time I’m in there.

CP: Okay – here’s the deal with the monkey bread. The monkey bread will stay, but it will be tweaked. Because apparently I can’t take it off the menu, but I will make it better.

I will put the Cleetus Friedman spin on the Fountainhead monkey bread, put it that way.

This interview has been condensed and edited.