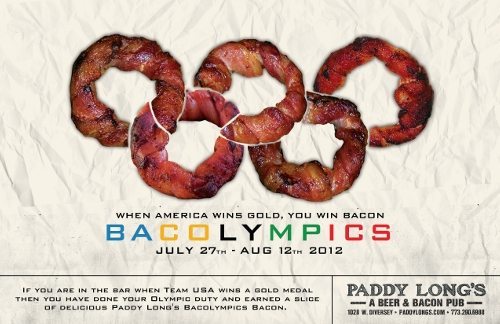 We’ve long been fans of Paddy Longs, as you can see here (from 2 years ago, whoa). And some of us (read: Karl) have been pushing back against the all-things-bacon trend for a while (from 4 years ago, double whoa). But as the baconsanity has faded, and our appreciation of Paddy’s remains considerable, we wanted to at least shine a little light on this: the Bacolympics.

The concept is pretty simple. Be at Paddy’s during a gold-medal win, enjoy a slice of delicious bacon. And what goes better with bacon than beer? See, we brought it around to beer in the end. From their list on BeerMenus, we’d recommend the new Solemn Oath Oubliette (because it’s damn good), the 3 Floyds Gorch Fock (because it’s fun to say) and the Smoked Porter from Stone (because Ryan loved it last time). Also, a bottle of the Clown Shoes Blaecorn Unicorn seems to make sense, just in terms of straight ordering. “A Blaecorn and a bacon, please.”

Now, go and drink beer and eat bacon and celebrate the spirit of international competition. In that order.

Get Into The Spirit; Bacolympics at Paddy Long’s was last modified: February 6th, 2018 by Karl