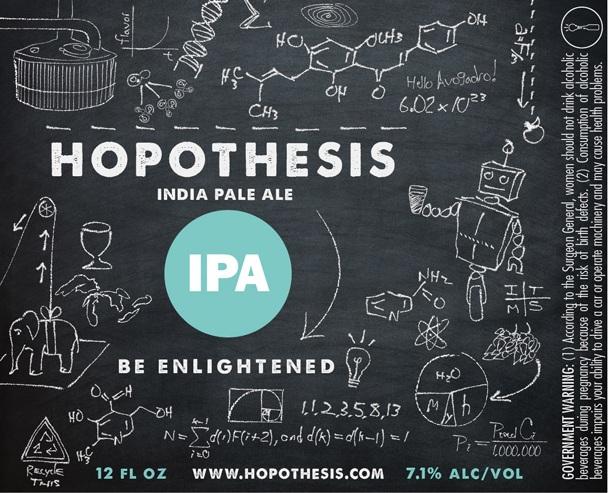 As we’ve discussed many times before; some breweries in Chicago have a long buildup to their first beer launch (Finch & Pipeworks) and others keep things under wraps til it’s go time (One Trick Pony). But what about a brewery that seemingly shows up, out of nowhere?

We present to you, exhibit A, Hopothesis Brewing Company.

We first heard about Hopothesis…yesterday…when we saw a link to a news release in both the “Chicago” and “Illinois” Google news feeds at the bottom of our site.

The release wasn’t touting the breweries label approval or that it had chosen a site for its brewing operation. No, the release was trumpeting the release of its first beer.

According to their website, the guys behind Hopothesis have been home brewing and formulating recipes for years leading up to their brewery launch. And this week that hard work came to fruition in liquid form.

According to the aforementioned press release (below)  Hopothesis’ IPA, clocking in at 7.1% ABV and 55 IBU’s, started flowing from the taps of The Beer Bistro Thursday, August 2nd.

“We wanted to create a different style of IPA. One that’s more of a session beer,” said Ike Orcutt, head brewer for Hopothesis Brewing Company. “You’ll find that Hopothesis IPA will not assault the palate with hops. Instead, the hops spike early, then plateau. You can definitely have more than one.”

The Beer Bistro happens to be a hop, skip, and a jump from Randolph and Halsted, where Hopothesis lists its “Beer HQ.” Nice to see a neighborhood bar picking up a neighborhood beer.

According to Hopothesis’ label approval they are currently contract brewing at Minhas in Wisconsin. And, according to their website, they are still pinning down a physical brewing location in Chicago. 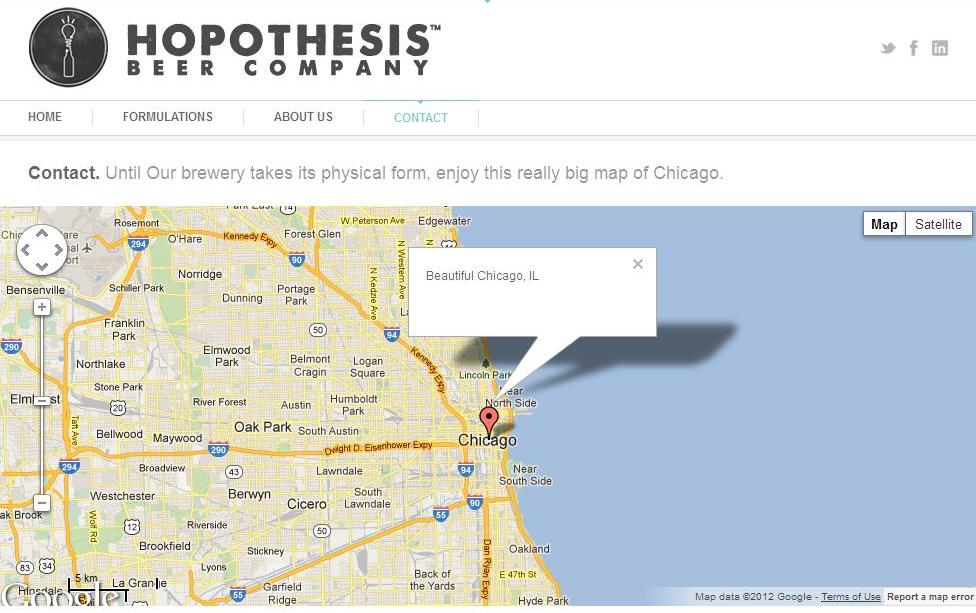 Hopothesis IPA is the “Beer of the Month” at The Beer Bistro. $4 a pour throughout the month of August.

Hopothesis IPA is crafted using Vienna and caramel malted barley combined with Cascade and Centennial hops. The dark golden beer is 7.1 alcohol by volume (ABV) and measures in the mid-range at 55 on the International Bitterness Units scale (IBU). The recipe has been fine-tuned over the years to create a unique balance of malts and hops. The result is a crisp taste with strong malty notes within the limits of respectable ABV and IBU measurements.

“We wanted to create a different style of IPA. One that’s more of a session beer,” said Ike Orcutt, head brewer. “You’ll find that Hopothesis IPA will not assault the palate with hops. Instead, the hops spike early, then plateau. You can definitely have more than one.”

Ike Orcutt is an accomplished and award winning home brewer. In 2011, he and a group of beer-loving entrepreneurs formed Hopothesis Beer Company to bring his most popular recipes to the craft beer market. The foundation of the Hopothesis brand can be traced back to the founders, who all have backgrounds in the applied arts and life science. The essence of the brand can be described as geeky-fun, alluding to the light-hearted approach to the science of making beer.

“We’re embracing the geek genre,” said Orcutt. “Beer aficionados don’t just drink beer. They truly appreciate the craft and its technical nuances. Our goal is to give them something to geek out about, with a healthy dose of fun.”

Hopothesis Beer Company has a strong pipeline of foundational recipes and is also working on specialty releases. The company’s next beer, Drafty Window(TM) will be released in late 2012.

Based in Chicago, Illinois, the Hopothesis Beer Company is focused on making great craft beer that delivers a flavorful, approachable, balanced drinking experience. Be enlightened with the art and science at www.hopothesis.com .