Wondering what to make a beeline for at BUG? Let us help. 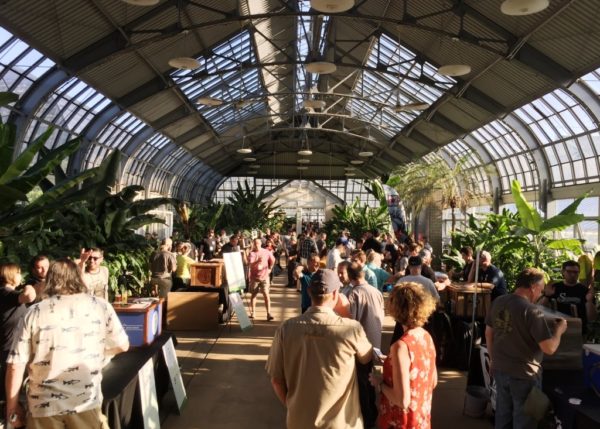 As one of the biggest Chicagoland beer festivals of the year, it can be hard to know exactly how and where to spend your time and energy. This year’s Beer Under Glass boasts over 50 breweries, all of whom pour anywhere from two to four beers over the course of the night. That adds up to a lot of decisionmaking and option-weighing.

We’re here to help. We’ve laid out a few different ways to approach Beer Under Glass this year, depending on your focus. Want the freshfaced newbies, the downstaters, the super-hyped or those from beyond the state’s borders? You’ve got plenty of options for all.

If you really want to plan ahead, the ICBW has a PDF version of the map here, and you can review all our coverage from previous Beer Under Glass events here.

Usually our plans go right out the window as soon as we walk through the gates — no BUG plan survives first contact with the enemy…er, breweries. That said, it’s always worth a shot — maybe this is the year we stick to a gameplan. Did we miss anything?

If this is your focus, you’ve got plenty of options. There was a huge burst of breweries that opened their doors last summer that will be pouring at Beer Under Glass for the first time.

Long Grove’s Buffalo Creek, Morgan Park’s Open Outcry, Tinley’s Soundgrowler, Stone Park’s Short Fuse and Villa Park’s More Brewing Co. all opened in June-July of last year, so they’ll be ready to impress the festgoers. Rounding out the summer ’17 crowd is Roaring Table which opened in August, with Macushla rolling out in September.

We went from having no Joliet breweries to two this year — Elder Brewing opened just at the end of 2017, while MyGrain beat them to opening by a couple months, opening last September.  Other super-new options are Elmhurst Brewing Company, still fresh from their February opening, as is ERIS Brewery and Cider House. (Hopefully they’ve got some ciders on tap  — those get mighty refreshing after wave upon wave of hopwater crashing across your palate.

Nevin’s Brewing isn’t new, but their Midnight Pig brand of beers is — they just launched in December, so this might be your first time to cross paths with those options. Finally, Saint Errant has had a busy year first year, starting in June at Mikerphone and moving to Begyle recently. Their first BUG showing will, we assume, see them pouring some of their DDHIPAs and adjunct stouts. Speaking of…

Riding the Hype Train: Must-Try Options That Could Kick Quick

If you’re looking for breweries that get the most discussion, the Mikerphone team still draws crowds for their hazy beers, crazy stouts and lovely sours. We’d recommend heading to Saint Errant and More Brewing as well — especially the latter since their Karma stout was named Best of Show at FOBAB. If that, or anything called Henna shows its face, grab it quick.

Also worth noting is that this is On Tour and Hailstorm’s first BUG since winning big at GABF this year. If Hailstorm is pouring their best-in-nation-IPA Prairie Madness, give that a shot.

If you scan the list, you’ll notice that even though we’ve had our beer week renamed to celebrate all of Illinois’ breweries…there’s only a handful from outside the greater metropolitan area. Regular BUG attendees will recognize the likes of DESTIHL and Brickstone (Normal and Bourbonnais, respectively) but also you should hit up Decatur Brew Works (from Decatur, duh) as well as Tangled Roots from Ottawa.

Not in attendance this year are Scratch Brewing and Hand of Fate, both who poured last year. If anyone’s paying attention, we’d love to see beers from places like Obed & Isaac, White Rooster and Lena make their way over here.

Breweries not from Illinois at the kickoff event for Illinois Craft Beer Week? We’re nothing if not inviting. Arclight, located in Watervliet, Michigan, joins the fun this year, as does Short’s Brewing from up in Bellaire. Cleveland’s Great Lakes makes an appearance as does Blue Blood Brewing Company, making the trip all the way from Nebraska so it’d only be right that you have a few ounces of their beer.

Finally, one of our favorite tastes of BUG2016 came from Misbeehavin‘ Meads out of Valparaiso, Indiana — definitely worth checking out. Especially if they bring one of their PB&J meads.

Those of us citydwellers can generally get our hands on beers in the city limits pretty easily — but it’s harder to try stuff from the suburbs without hopping in a car or on a Metra and making a specific trip. That’s why if you’re stuck with Chicago boundaries most of the time, we recommend you check out beers from smaller suburban operations like Black Horizon (really liked their beers at last year’s events), Crystal Lake Brewing (their award-winning blonde beer isn’t flashy but worth a sample), Imperial Oak, Lunar Brewing, Metal Monkey, Prairie Krafts and Skeleton Key.

There’s room for category-free wonders, right? Pipeworks always has something interesting worth trying, Spiteful has been really stretching their legs since opening their new brewery and taproom, Alarmist and Hop Butcher are probably gonna have something hazy and fun to pour and we always try a couple Haymarket beers too.

Now that we’ve named about half of the breweries attending Beer Under Glass, we realize we’ve probably helped very little and you’re going to drink whatever you damn well please. Maybe now you’ll at least know why you’re doing so — there’s just too much stuff to try.