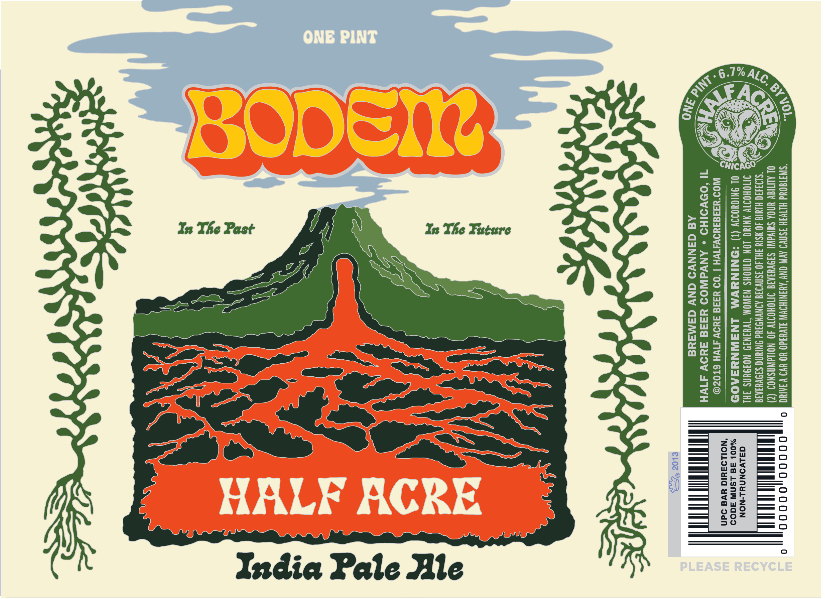 It’s about a half a decade since Half Acre released a new year-round beer. That’s roughly half of the brewery’s lifespan, and the beer world has changed dramatically since Pony Pilsner went 365 back in 2014.

Accordingly, so has Half Acre.

Back then the brewery had just rolled out their popular new core pilsner, and was just getting ready to kick off the construction of their Balmoral Avenue production brewery. Today, that facility is blasting out 44,000 barrels of beer a year, sending them to far-flung places like New York, Philadelphia and soon San Francisco and New Jersey. The Lincoln Avenue brewery continues to chug along at a 1500bbl pace cranking out crazy wild ales and other hopped up specialty beers for freaks like us.

So when it comes to a new, mainstream, $10-per-four-pack IPA for the masses and beer dorks alike, why mess with success? Why not go year round with more known brews like Goneaway and Vallejo? Why build from the ground up? Actually, “ground” has a lot to do with it.

The new beer, named Bodem, comes from the Dutch word for bottom, in this case referencing earth, soil or ground. “Basically the idea of eruption from the earth,” Half Acre founder Gabriel Magliaro told us. “Be it a volcano, be it a hop bine, a forest floor — any of those things that pound your senses and make you feel connected to the earth.” That label up there makes a little more sense now, huh?

More From GDB:  Band of Bohemia: The Q&A

The beer itself is classic Half Acre: A 7% ABV IPA that walks the line between hazy and clean, tropical and bitter. Magliaro sees it as the dividing line between West Coast sharpness and fully opaque, Instagram-model orange-juice boss pours, “without going down the massive hop loads that you’d find in some of the hazy IPAs … it’s definitely that midway point.”

That said, it’s definitely dryhopped, but with an eye on becoming a new daily drinker. If you think economics don’t enter into the decision making process when rolling out a beer of this magnitude at one of the largest breweries in the state, think again.

“It’s as super dryhopped as you can be while still coming at a $9.99 four pack,” Magliaro says. “It’s built to be accessible, a beer you can go and buy at your corner store. It’s built for every-day drinking.” So, not a juice bomb, then? “Definitely not,” Magliaro confirmed. “We make beers like that but this is not that. This is meant to stoke some of those qualities but it is certainly not a monster haze-driven beer by any means.”

As for the decision to keep Goneaway and Vallejo to six months each, it’s partially a decision of aesthetics — each of those IPAs gets half the year because they view Goneaway as a “cooler” beer (in spite of having cacti and lightning on the label) whereas Vallejo is a “warmer” one — but also, there’s just not enough hops for both to keep ’em going all year long.

Plus? They just wanted to make a new beer for this moment. “If we were also gonna go all-in on a year-round, we wanted to make a beer that was more reflective of how we’re thinking about hoppy beer right now.” Hence, Bodem.

So with all that in mind, is Bodem the next Daisy Cutter or Pony Pilsner (both of which are now being sold in 12packs of 12oz. cans)? Let’s not jump to conclusions just yet — this is simply the IPA that Half Acre wants to serve you right now. “Will we be making Bodem year round in two years? I don’t know,” Magliaro says. “But it’s definitely a reflection of how we feel about accessible, hoppy beer as of this moment.”

And, given that they’re aiming to have this available for $10 at your local grocery and convenience store, it’s definitely going to get a larger amount of dryhopped beer across people’s palates than a stack of cases flying out of a taproom once a week.

Bodem releases on Friday, April 26th at the brewery’s taprooms, and hits distribution channels within the week following. After that, it’s up to you to find out how far down the Bodem goes.