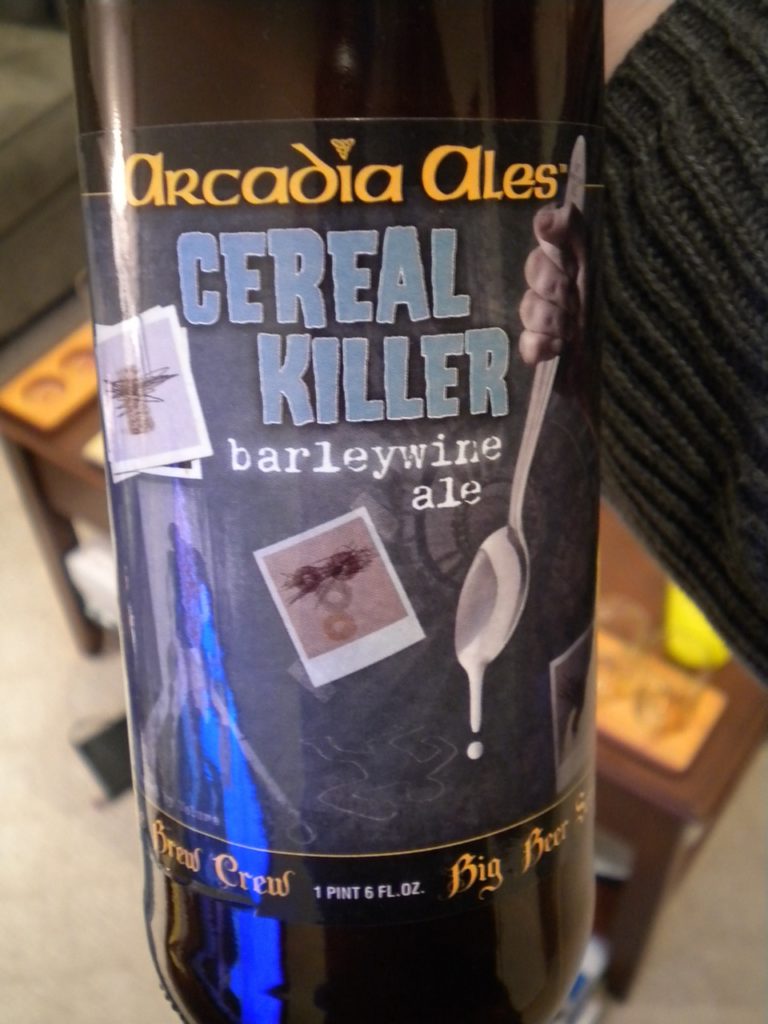 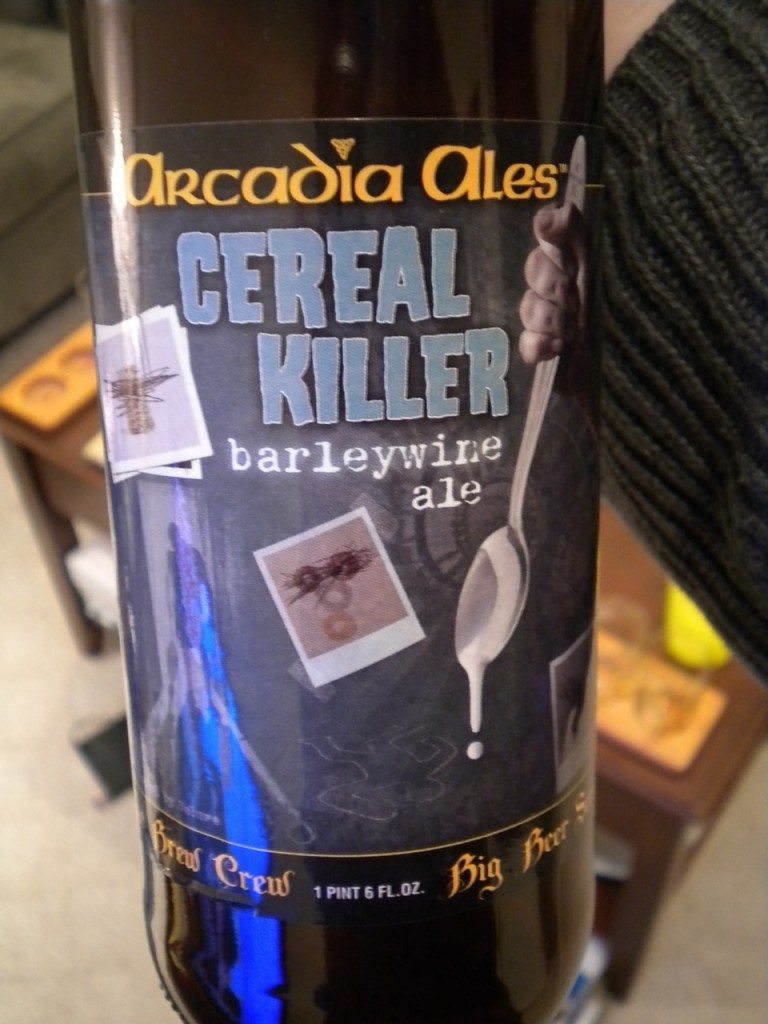 “Brewed in the traditional English style of Barleywines, Cereal Killer is an explosion of full-bodied, malty goodness. Huge syrupy flavors flow over caramel, toffee, molasses and toasty notes. All these rich malt flavors are balanced out nicely by just the right amount of citrus-like hoppy bitterness. A high alcohol content makes this a beer for the cellar. As this brew ages, it will continue to develop more sherry-like flavors and aromas similar to a cask-aged port.”

KARL: It’s not often that you get to break out a 5-year-old beer. I fully expected there to be a glaring lack of flavor and presence after such a long time sitting in the cellar, but Arcadia built a beer to stand up to the ages – or at least a half a decade.

Smelling of butterscotch, caramel and brown liquor, I wrote that this beer pours both muddy and (if I can read my handwriting correctly) bloody, appropriate for a brew that claims to be a killer. You could tell that the flavor of the beer had indeed faded somewhat, and the body had definitely backed off to become a more watery brew. But as far as age was concerned, those were the only concessions to the time span.

Some delicate flavors of white grape or champagne had begun to peek through, and there was still plenty of harsh alcohol burn on the front end as well. Temperature, I noticed, played a huge role in the flavor of this beer. When Ryan served it straight from the fridge, the flavor was barely noticeable – just aroma and fluid.

But give it a while, let it sit for a few minutes, and some of the old energy came back to the brew. It became the barleywine I remembered from our first (pre-Guys-tasting) experience…for a while. Bring it up to full room temp and it fades away once again. Leave a beer in the bottle for this long, apparently, and it teases you by not lasting long in the glass.


RYAN: This tasting, inadvertently, became an experiment in serving temperatures.

We cracked this, impromptu-ly, to celebrate some good news on Andrew’s behalf. In my haste to get this beer cold enough to consume, I tossed it in the freezer. And…I left it in there too long. Not to let an ice cold beer (it’s better that way, right?) ruin a good tasting I poured it anyway. And what we had, initially, was a beer we could hardly smell or taste.

So we sampled two other beers and came back to it.

The Cereal Killer had warmed up enough to reveal a plethora of dark fruits on the nose; plums, figs and dates. Also joining the party was a touch of caramel and a surprising aroma of butterscotch.

Take a sip and you have a heavy, thick barleywine that I likened to “almost chunky.” And I mean that in the nicest way possible.

Allow it to warm a bit more and you’ll notice some hints of cinnamon and ginger on the nose as well. You’ll also notice some booze. A lot of booze. But it, strangely, doesn’t translate on to the palate much at all.

The once puckeringly sweet dark fruit flavors of this English barleywine have since faded leaving a cherry cola-ish flavored beer that goes down eerily smooth but lacks significant depth for a five year old beer.

Andrew: I think I liked this more than Karl and Ryan as I noted that this was an early entry for a top 5 beer of 2012, but definitely agree with them in that this beer improved significantly as it was allowed to warm up to room temperature.

Once we were able to actually taste what we were drinking, we were greeted to a spicy, smooth yet thick English barleywine with notes of butterscotch, caramel and maybe a touch of cinnamon. I was looking for more booze and more dark fruits, but there was a decided lack of both for me, which didn’t detract from the experience in the least bit. Oh, and there were floaters. Lots of floaters.

Great beer – thanks to Ryan for opening this up in honor of moi.

From the Cellar: Arcadia Cereal Killer Barleywine was last modified: August 27th, 2021 by The Guys