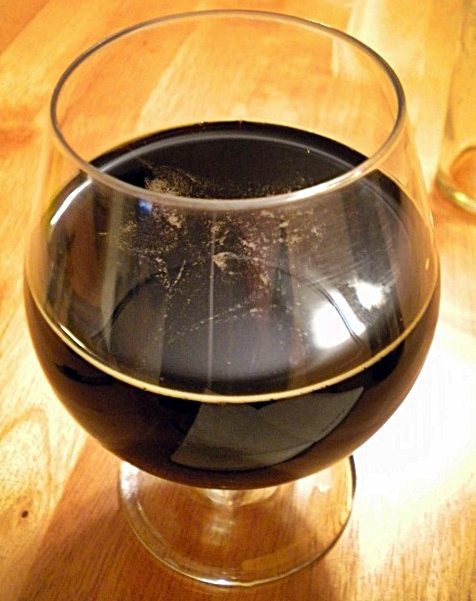 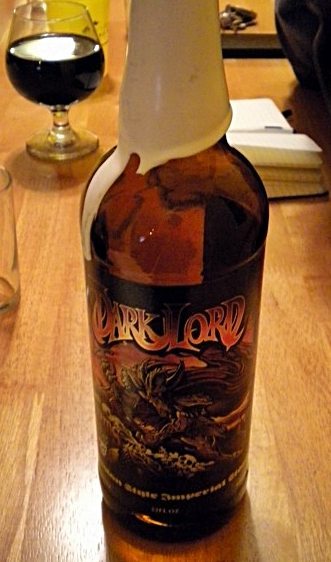 I could leave it at that, but believe me, I really wanted to like Dark Lord.  Nay, I wanted to love it.  I wanted to believe that it was worth the wait the hassle, that it wasn’t entirely style over substance, that it wasn’t a manipulation of capitalism’s market scarcity that made it so heavily hunted.  I wanted the beer to not only be worth my wait, but also the waits of every person who stood in line in Munster, ever person who got shafted out of it by bad distribution plans (ie: not being able to count), by the a-holes who sell this stuff on Ebay for crazy stupid prices.

Here’s what it was:  Thick.  A hot mess of an “all-in” brew, as though they looked at the recipes for every Russian Imperial and said “let’s just throw a bunch of stuff in there and see what happens.”  It’s raisin-y and dark and boozy and no one flavor sticks out, no single thing stands up and takes notice in this beer, it’s just an amalgamation of flavors and scents and impressions mixed into a syrupy alcoholic goo.

I’m glad I finally had it.  More power to those who fight the good fight to retrieve it; I shall not likely be one of them.

Andrew: When I was younger I collected baseball cards. One day I was showing my grandpa my baseball cards and explaining to him how much each card was worth. Finally he told me, “You know your cards really aren’t worth anything.” This confused me because I had a book that told me exactly how much my cards were worth. He responded, “Your cards are only worth as much as what someone is willing to pay for them.” I didn’t get it then, refused to accept this theory. But now I get it.

Why do I tell this story? 3 Floyds did a pretty impressive thing here. They’ve created such a buzz about a very rare beer that at best is a good beer and at worst is a pretty big disappointment.

Did I like the Dark Lord? Sure, it was fine. Would it be worth waiting in line for it for 6 hours or generally giving up an entire Saturday for the day? Absolutely not. I’ll admit that had this been a normal beer that I could pick up at Binny’s for $10-$15, I would have liked it just fine. But this beer, as Peter Griffin would say, insists upon itself.

There was so much going on in this extremely complex beer, that it didn’t do any one thing well. What did I all pick up on? Coffee, booze, raisins, plums, red wine, tobacco and some smokiness. But it kind of reminded me of Batch 10,000 in that someone just threw a bunch of stuff in a pot and said, TA DA!

Like Karl, I’m glad we finally got to try this, but I’ll never be a participant in Dark Lord Day. That’s not a dig on anyone who does head to Munster, IN on that day, it’s just not my thing.

Ryan: I’d love to tell you that I was the dissenter of the group and that this beer lived up to my wildest dreams and expectations. But, much like Karl and Andrew, this just fell flat for me. Not in flavor, mind you, because there was so much happening with this beer that at one point we all sat there and stared at our glasses. No one spoke. No one blinked. We just watched. Like it was a dead animal on the side of the road. I was half expecting Andrew to poke his glass with a stick to see if it would move.

There was smoke and soy sauce and salted meat and sawdust and stale coffee and plums and raisins and cherries.  But I can’t say I really enjoyed the combination of those aromas and flavors.  None of them melded together well and no one flavor made this beer more or less pleasant.  It was just a heaping pile of scents and tastes poured in to a snifter.

The best way I could describe his beer is challenging and I don’t mean that in a flattering sense.

Did we choose the wrong Dark Lord for our introduction?  Skim through the reviews on Beer Advocate and you’ll find that many people aren’t very fond of the 2009 version of this beer.  We have a 2010 bottle, is that any better?  And that is not a rhetorical question.  I really want to know, is the 2010 Dark Lord better than the 2009?  Because if it is I’ll crack it open tomorrow.  I want to like this beer, I really do, but if this is Dark Lord’s best foot forward than I am demonically disappointed.

From The Cellar: Three Floyds Dark Lord 2009 was last modified: February 6th, 2018 by The Guys