What Chicagoland didn’t win in quantity, we won in status.

This image just scratches the surface of the full GABF footprint.

Part of me wanted to leave the GABF awards ceremony early. I’d been sitting there for better than two hours, I had a cousin patiently and mostly soberly waiting for me out on the main floor — and out of all the hundreds of entries in the Hazy/Juicy IPA section, there was surely no way that a Chicago-area brewery would win one, right? Let alone take two of three of the medals?

Pretty glad I stuck around til’ the end.

Chicago became a bonafide hazy-IPA destination at just a few minutes after noon, Mountain time, on Saturday September 22, when Alarmist Brewing was awarded Gold for their Le Jus IPA. Hot on their heels: Eris Brewery & Cider House with a bronze win in the same category for their Foiken Haze. That capped off a pretty decent day where Illinois brewers took home a dozen medals overall — it’s more than we took home last year (10), not as much as our biggest showing in 2016 (17 medals that year).

Numbers aside, in terms of an award ceremony putting Chicago on the map in a way previous years haven’t done … this year probably did that far more than most — even more than Hailstorm’s Prairie Madness pulling down Gold for IPA last year.

A post shared by Eris Brewery And Ciderhouse (@erischicago)

What about the rest of the Great American Beer Fest, you ask?

Well, the biggest and most important beer festival in the nation got bigger this year — which wasn’t a bad thing. My first GABF experience in 2014 was also huge, but also packed, cramped, sometimes overwhelming in a not-great way. This year? Plenty of room to move, spread out, sit down, chill out for a few minutes if you’ve had a few too many samples.

Independent of whether you liked Jameson and Buffalo Wild Wings major sponsorship of the fest, adding their square footage added a couple interesting new locations to check out aside from the usual lines at endcap brewers and other no-name places with pitchers of beer.

I’ve heard some griping about the weird alphabetical layout — I mostly liked it even though the Meet the Brewer section totally threw off a lot of brewery visits that I thought were out in the regular section. Was it perfect? Nope, but given the huge footprint, you had a much better idea of finding the brewery you wanted to find vs. trying to figure out what region they were in, and then tracking them down from there.

Let’s nail down the numbers a little better next year, though, GABF — 3 Floyds vs. Three Floyds is pretty major location change. 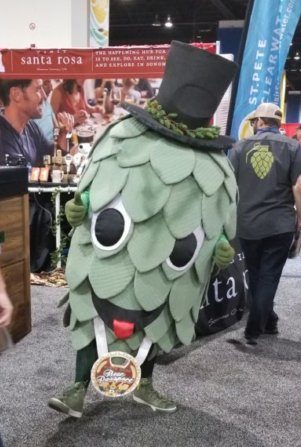 You don’t hear much about them the rest of the year (unless Evanston is charging them for breaking a lease on a place they never moved into) but Smylie Bros. Purple Line has to legitimately be considered one of the best Fruit Wheat beers in the nation, with their third win for the beer this year.

The Golden Prairie line of beers recently re-emerged out of Argus as a revival of one of Chicago’s original craft brands. Pretty nice to now be able to point to a gold medal for their Doppel Alt and say hey — these beers are back two decades later, and arguably better than ever.

Despite the big wins in the Hazy IPA categories around here, let’s not forget about Corridor Brewing & Provisions — the #1 medal winner in Illinois with two awards — a silver in Hazy DIPA for their Color of Life (which was only named as DDH DIPA on the awards sheet due to listing error) and gold for their Pour le Mineur grisette.

If you’re on the hunt for a strong Belgian beer, head over to Indiana’s Taxman Brewing, winning two awards for Belgian styles and making up nearly half of the whole state’s 2018 haul.

I regularly call Founders Porter one of my favorites, and one of the nation’s most underrated beers — nice to see it still earning accolades, with a silver medal this year in the Robust Porter category.

Illinois and Minnesota did quite well this year but Ohio crushed us all — they took 14 medals this year, as well as taking the Very Small Brewing Company crown away from last year’s winners, On Tour Brewing Co., moving that award east to Brink Brewing in Cincinnati.

Last year I asked WTF was up with Wisconsin, taking home just two 2017 medals. This year they doubled their output and brought home four medals … one of which won last year (Third Space’s Unite the Clans).

Congrats to all the winners. Here’s our full roundup of the 2018 GABF medal winners around the Great Lakes:

(Technically we aren’t counting the 2018 Collaboration Silver for Firestone’s Pixie Dusted, but we could since that collaboration was largely driven by One Off beer director Adam Vavrick.)

For roundups of previous years, see the following:
The GABF 2018 Midwest Medal Roundup was last modified: September 27th, 2018 by Karl