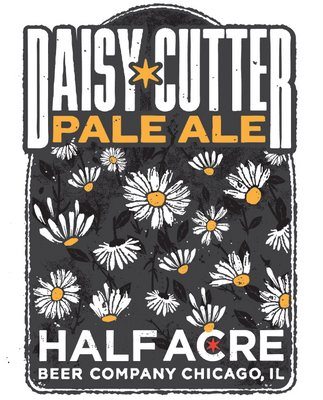 A west coast Pale Ale chock-full of dank, aromatic hops. This one’s a screamer, horde it.

Got lazy. No photo. Here’s a logo.

Andrew: I picked this beer up at the Half Acre brewery, growler style, the day before we tried it.

Since it was so fresh, Ryan and I started off our beer-tasting-extravaganza with this beer, and the first word that came to mind when I saw it was, “pretty.” So there you have it, it’s a very pretty beer, pouring  a very rich amber color with a pretty good head.

It has a really hoppy nose, so that’s what I was expecting on my first taste. While it was slightly hoppy, the hops were joined by a very nice citrus flavor, which provided a good balance to the beer.

Ryan: Like Andrew said, this is a good-looking beer.  I’m not sure if the crew at Half Acre would appreciate the word “Pretty” being used to describe Daisy Cutter, but that’s about the only word that came to mind.

The beer has a nice hazy, golden hue to it with two fingers worth of pillowy, white foam that you just can’t help but dunk your nose in to on your first sip.

There is a good bit of hops in the nose of this one and some nice citrus too.  Just another reason to dunk your nose in to the head of this beer.

The taste is a pleasant blend of piney hops and some grapefruit and lemon citrus flavors.

At only 5.2% ABV it did not take us long at all to finish off a growler of this.  We’d highly recommend grabbing one of your own from Half Acre, pulling up a lawn chair and sitting on your back porch/front deck/sidewalk & enjoying 64 oz of pale ale perfection.  Sharing is optional.

Review: Half Acre Daisy Cutter was last modified: February 6th, 2018 by The Guys