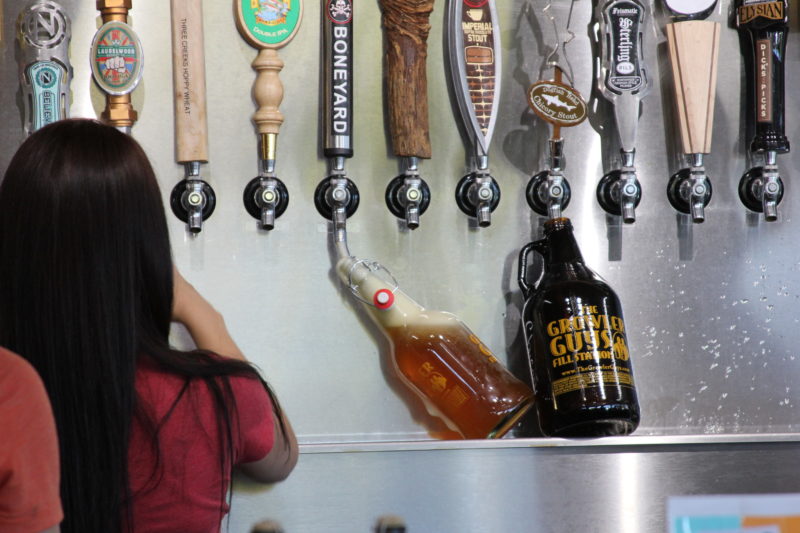 The ICBG solidified its position in a letter to members from its Board of Directors which simply states, “The Board is not in favor of non-brewers selling growlers to the public.” The letter, which you can read in its entirety below, includes language of the current law and reiterates the Guild’s support of the statute as-is.

“[F]illing growlers is a well-established right or special privilege in Illinois that brewers (manufacturers) have in order to guarantee and protect the integrity and freshness of their product,” the letter states.

While the ABDI is not named in the letter, spokesperson Carol Shirley tells Guys Drinking Beer they met with members of the ICBG and discussed the issue in February. “ABDI stands with the Illinois Craft Brewers Guild on this issue, as we too believe the integrity of the product may be jeopardized,” said Shirley.

We know of only a handful of instances where growlers were being filled at the retail level or a business expressed an interest in doing so over the last few years. Sheffield’s, in Chicago, filled growlers for a brief period. The practice was well advertised and eventually stopped, although we’re not sure at whose behest.

Sheffield's is now serving growlers to go. $14 for beer of the month and $16 for select drafts with a $6 deposit…. https://fb.me/Jl3pgYbT

When Walgreens began construction on its State Street location in the Loop, the company quietly inquired about being allowed to fill growlers there. The idea, however, disappeared just as quietly as it first surfaced. I am sure there are other places that did fill growlers or currently do — but keep it under wraps. There are hundreds of bars in Chicago, it’s hard to know what all of them are up to.

There is one retail outlet that was interested in selling growlers to go on the up and up — Binny’s Lincoln Park. We traded emails with Beer Manager Adam Vavrick in 2012, prior to the revamp of that store’s beer section. Vavrick ran the idea up the flag pole with the Illinois Liquor Control Commission who initially gave him the green light but then retreated and told him, via email, “A growler can be filled from where it is manufactured, but not from a retail establishment.”

It would take a change in state law and likely a city ordinance to allow for a store or bar to legally fill growlers. It didn’t look like that was happening in 2012 and it certainly isn’t happening now.

We relayed the ICBG’s stance to Vavrick who was disappointed, to say the least. He pointed out that 34 other states allow growler fills at the retail level. “To say that they’re worried about the quality of their product suffering is a fair point, but it seems ludicrous to imply that retailers here can’t/won’t do it properly,” said Vavrick.

Vavrick also believes the Guild missed an opportunity to generate discussion on the issue. “This is a fantastic way for everyone (Brewers, Retailers, & The ILCC) to sit down to create standards to protect the integrity of the product, offer the consumer a new way of experiencing their fine beers, and to further build a working relationship between all parties,” said Vavrick.

This certainly doesn’t mean at some point down the road the laws won’t be changed or that someone couldn’t rally the troops — particularly from the retail level — to push for a change in the law. But a unified brewers guild and distributors association makes that an even steeper challenge.

However, Vavrick hasn’t given up and we suspect the half-dozen or so people who email us each year wanting to know about growler fills at retail outlets won’t either. “Changing the growler laws would be good for everyone,” said Vavrick.

The Board of Directors of the Illinois Craft Brewers Guild (ICBG) has come together with a conclusive stance on behalf of Illinois craft breweries regarding growler sales. The Board is not in favor of non-brewers selling growlers to the public.

The Board of Directors feels that this existing law remains appropriate, as filling growlers is a well-established right or special privilege in Illinois that brewers (manufacturers) have in order to guarantee and protect the integrity and freshness of their product. The Board of Directors also understands and appreciates the desire of retailers to share this established right with brewers and the common desire by both retailers and breweries alike to sell even more of our great craft beers. Nevertheless, fulfilling those worthy desires cannot come at the expense of risking the integrity or quality of the brewer’s product. The law’s current requirement that only the manufacturer/brewer can fill and seal original containers protects the consumer, and ultimately the retailers and brewers, by ensuring that the beer purchased by the consumer originated from that particular brewery as intended.

Why Bars and Restaurants in Illinois Can’t Fill Growlers was last modified: February 6th, 2018 by Ryan