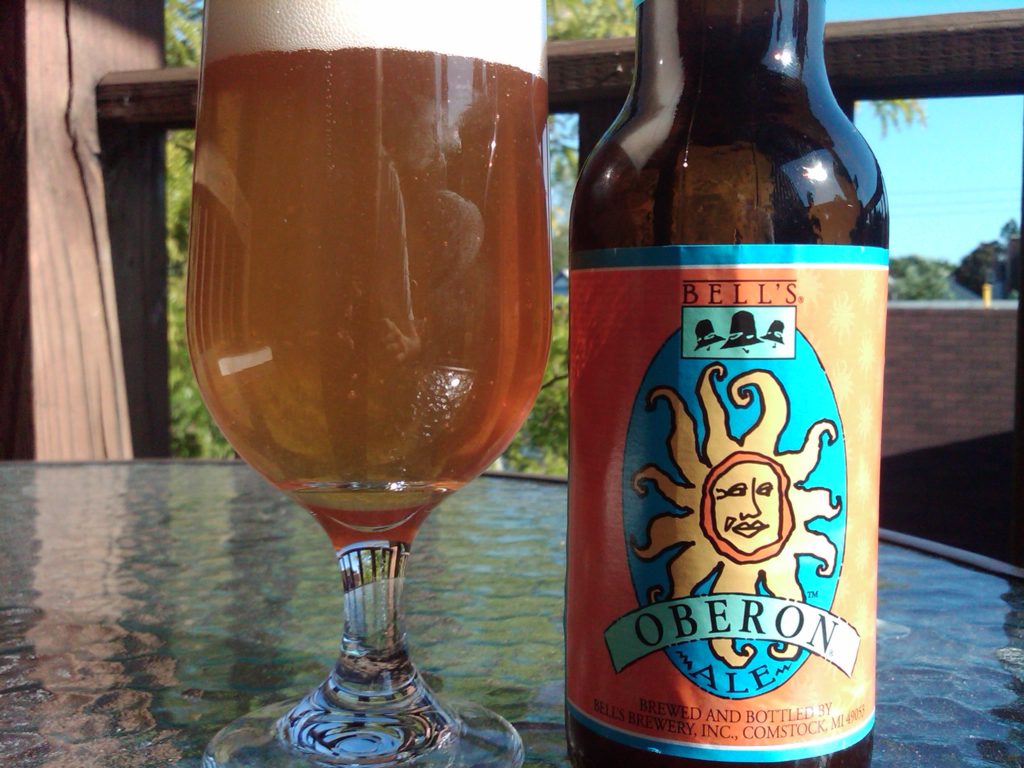 Bell’s Oberon: it conjures thoughts of women in sundresses, grilling on the back porch, drinking away an afternoon and baseball.

An American wheat ale brewed with Saaz hops. Spicy and fruity, Oberon is the color and scent of a sunny afternoon.

Karl: Oberon will always have a special place in my heart for a number of reasons.  I’ve spent numerous afternoons camped out on barstools watching baseball games during the summer, nursing an Oberon or three, afternoons and evenings on porches and patios with Oberon, and other various summer-centric activities where Oberon was close at hand.

Mostly, it was the passion of my Michigan-transplant wife for Oberon, and her nebulous yet very specific rules about timing the first Oberon of the season (pay no attention to the calendar or release date, when it’s time for the first Oberon you’ll know), and her exuberance for Oberon took root in me and sticks around to this day.  There’s always a new beer to try, and I’m sure that every midwestern brewer (Michigan brewers for certain) dreams of an Oberon-killer, and yet every time late spring rolls around I start looking forward to that first sunny wheat ale that says “hey, it’s getting warmer out.”

But is Oberon really that good?  Or am I being clouded (wheat ale pun intended) by good memories, a pre-craft-beer-website opinion or anything else that might have affected my outlook in the beer?  The answer is…well, both.

I have had a lot of wheat-based beers, but like the saying goes, you never forget your first.  I credit Oberon with being one of my first steps to a larger world of beers.  And while other beers may loudly trumpet their gargantuan flavor profiles and their overdose of ingredients, Oberon stays pretty much the same year after year, understated yet perfectly self-assured.  It was on the scene from day one, it’s made its mark and doesn’t need to do anything other than show up in April or May.  And it’s got that same character that makes Bells’ Two Hearted one of the best beers in the world.  Nothing huge, nothing overdone…but everything is just right.

Pretty soon, we’ll be well into porters and stouts, we’ll be fawning over Oktoberfests and pumpkin ales, and things like shandy, sangria, Oberon and even Game Day Light will be forgotten.  Still, there’s always going to be something special about that first Oberon of every year – and every time that Oberon is done for the rest of year, it just becomes time to start looking forward to your next one.

More From GDB:  In Which The GDB Live the High Life

Ryan: There’s something about the release, not even drinking one, but just knowing that you can find it on store shelves that lets you know everything is going to be alright. It says, “winter is finally over and that season we once called spring, but now really only lasts for a week or two, is coming to a close. Now you can look forward to women in sundresses, grilling on the back porch, drinking away an afternoon and baseball.”  Have it with an orange.  Or don’t.  It doesn’t really matter because it’s summer now.  Want to buy it in a mini-keg?  Do it.  You have nothing else to do – because it’s summer.  So what if it doesn’t feel like summer yet.  Sure, it was 51 outside when Sheffield’s tapped that first keg of it – but damn it Oberon’s here and so must be summer!  Oberon does for me what those Corona commercials with the couple on the beach do for people who don’t drink craft beer.

Enough gushing; you probably want some particulars.  Well, it pours a cloudy, beautiful orange in color with an almost always guaranteed few fingers of sticky, white head.  Your nose is filled with light scents of orange peel and coriander.  The taste is crisp and refreshing; smooth wheat flavors, orange zest, more coriander and a nice, bitter finish.  The carbonation is spot on.

More From GDB:  Drink Your Way Through The Alphabet And Learn Something Along The Way

This is a must drink summer beer.  And, if you like to fry up some fish in the winter I would highly recommend holding a bottle or two back.  Oberon makes for one hell of a beer batter.