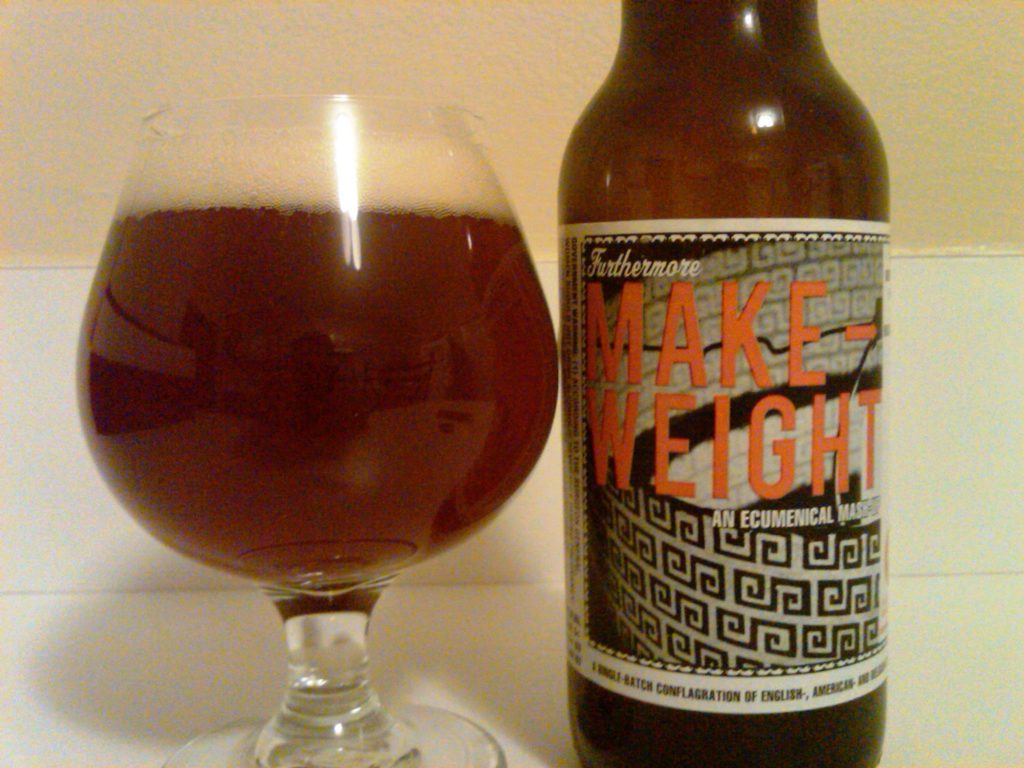 “Our triple pale is a bastardization of three regionally distinctive recipes that were stacked in unequal measure in order to make a beefy beer which highlights each recipe’s finer points: Esters from a dominant Flanders yeast are reigned-in by cleaner American and London strains; Kent Golding hops provide mild bitterness, giving English and Belgian specialty malts room to breath; Oregonian hops offer a fragrant nose; Belgian candy sugar boosts the strength of this mash-up to 8.5% ABV.”

Ryan: I’ve had a few of Furthermore’s beers before – namely the Knot Stock, Fatty Boombalaty and Thermo Refur.  I’ve noticed a bit of a pattern with this brewery; either their beers are great or intriguing.  Not bad. mind you, but intriguing.  The first two, a pepper pale ale and a big Belgian white ale, were great.  The third, well, I can’t think of any other way to describe a beer made with beets as anything other than intriguing.  So what does the Makeweight fall under?  Intriguing and maybe confusing.

This beer poured a caramel brown in color with a bit of off-white head that billowed and dissipated rather quickly.  The smell was kind of funky; there were hints of banana and clove but you really had to get your nose in there to even pick that up.  So far it does not smell like any of the three aforementioned IPA’s.  Makeweight tastes equally as funky.  It starts off a little sweet with some banana bread and more clove, followed by a brief splash of some floral hops, ending with what I can only describe as sweet malts, dark cherries and booze.  In fact, this one burned all the way down.  You can taste every bit of the 8.5% ABV.  If you let it warm that little splash of hops is gone and Makeweight is all banana and dark fruits.

Like I said – intriguing and confusing.  There were times when I wasn’t sure what I was drinking or if I really liked it.  I am glad I gave this a shot though and it doesn’t deter me at all from sampling any of Furthermore’s other offerings.  In fact, if this piqued your interest I would say pick a bottle up if you run across it – but only get one.  Honestly, I don’t know what I would do with a six pack of this – which may explain why I got it in a trade.