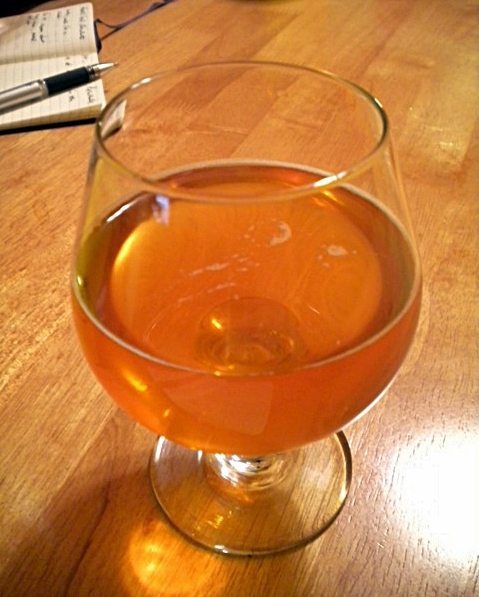 “Poppa Skull is the reciprocation-collaboration between Dogfish Head and 3 Floyds Brewing Co. Our brothers from another out in Indiana. The first beer we did together at 3F, Popskull, was a high-gravity dark lager aged on chunks of our palo santo wood. Poppaskull is similar in abv, a sipper that will age well, also aged on wood, but very, very different in flavor and aroma.” 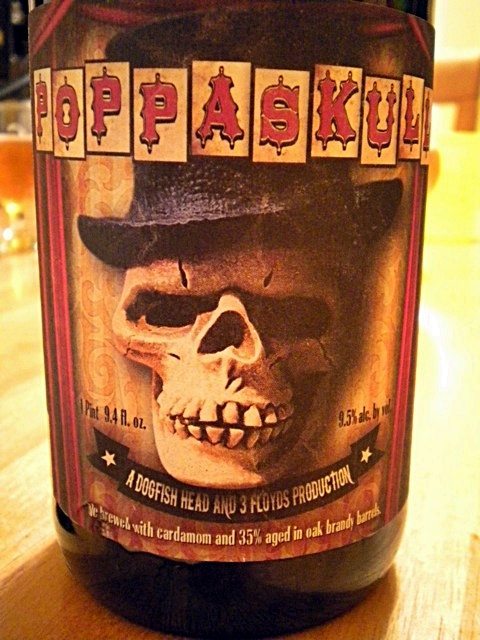 
Karl: I’m not sure how and when this particular review will post, but allow me to say right at the front that we had the Digfosh Head / 3 Floyds Poppaskull after a long, hard night of imperial stouts, porters and bourbon barrel aged EVERYTHING.  So you know where my palate was coming from when I say that this was a veritable breath of fresh beer air at the finish of a long night.  Thankfully, this wasn’t just a relief of a beer, it was a good one, too.

I wrote down a lot of words to describe this beer (surprising that I wrote so much – at the end of an evening often my notes just read “MEH” or “BOOZE” or “AAAAAAAAA”) but if I were to sum it up in one, it would be thus: “Friendly.”  Yes, despite the creepy skull on the bottle, this is a friendly beer.  A happy one.  Light.  Playful.  It’s a ball pit playland of a beer.

It tastes of coriander and floral tones and buttery, herbal sweetness.  There may even be a touch of hibiscus, although I could just be thinking that because I had recently had Half Acre’s Ambrosia, made with hibiscus, and I like writing hibiscus.  It’s savory and a little syrupy but still light and maybe a little licorice at the very end.

Andrew: I’ve really been looking forward to the Poppaskull since the day I bought it from Drinks Over Dearborn (RIP). It was certainly a welcome change from the bourbon-y, stout-y beers we had that evening.

This strong Belgian poured a cloudy beer with a bit of heavenly sediment floating around. Lots of spice, citrus, sweetness and some malts in the nose and just a really complex spice (rosemary? sage?) lemony woody taste that impressed me to no end. There’s a lot going on here, but it does everything well. All the flavors in this sandbox play well together. But I gotta ask – where’s the booze? At 9.5% ABV I expected something, maybe a little burn…but there was nothing. And it was glorious.

I could have more of this, and I think I will. I need to find another bottle.

Ryan: This beer surprised me from the moment we popped the cap till we finished the last drop.

For starters, I don’t not expect the beer to pour this dazzling of an orange in color.  Maybe it was because all we drank the night we sampled this was huge and heavy barrel aged beers, but I was anticipating a dark amber beer to pour from the bottle -not something so vibrant.  After sniffing on beers full of chocolate, bourbon and coffee the bouquet of spices in the Poppaskull was a welcomed change; lots of coriander, orange peel and other spices that I couldn’t quite pin down.  Equally surprising was the creamy, syrupy and smooth body of this beer, which burst with herbs and spices.

If you blended the Dogfish Head/Stone/Victory collaboration Saison du BUFF and Stone’s Vertical Epic 10.10.10 I am convinced this is the beer you would wind up with.

As Andrew mentioned, the 9.5% ABV was nowhere to be found making for a pleasant and enjoyable beer to finish off a great night of tasting.  If you haven’t tried it yet, find it and drink it (multiple barrel aged beers beforehand is not required).  We’ll be keeping our eyes peeled for a bottle or two to throw in the cellar.  I’d like to think this would only get better with time.