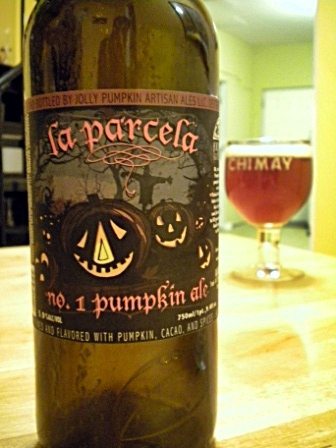 “Ok, so the joke was that Jolly Pumpkin doesn’t brew a pumpkin beer. Well, now we do. Just this one. Packed with real pumpkins, hints of spice, and a gentle kiss of cocoa to liven the soul. An everyday easy way to fill your squashy quotient. Guess now folks will have to find something else to joke about…”

Karl: Out of all the pumpkin offerings that Ryan has amassed for us, this was honestly the one I was most looking forward to.  Promised as a pumpkin beer with cacao and sour tartness, and with my head full of thoughts of our tasting of the Madrugada Obscura (which still requires a spellcheck), I had high hopes for this one.  I think we were punked, honestly.

The label very prominently refers to the fact that though the brewery is named Jolly Pumpkin, they hadn’t up until that point brewed an actual pumpkin beer.  I imagine they get tired of this line of questioning at the various brewpubs they operate in Michigan, but I have little sympathy – they chose the name, after all.  If I started Happy Cherry brewing, everyone would be well within their rights to ask, “so when’s your take on the Cerise coming out?”  That said, they reference that now, having brewed the La Parciela, we’d have to find something else to joke about.  But the joke was really on us.

Was this a good beer?  Of course it was.  Cloudy deep orange with a thin beige head, and hosting a creamy hefty body for a “pumpkin” beer, this was very obviously a Jolly Pumpkin beer thanks to the overwhelming sour tartness that covered just about everything else.  Spices?  Yeah, they might be in there.  Cacao?  Nope, not in my glass.  Just sour, tart, sourtartness.

We let it open up a little bit to see if the sour would back off and reveal any of the fruit.  We got it to do so just a touch, but that could have been just my wanting-to-believe imagination.  It never stopped being too sour to let anything else get through.  No more joking about pumpkin beers toward Jolly Pumpkin – but I feel like they may be doing the laughing this season.

At this point we decided to walk away for a bit and give it some time to breathe.  Did it help?  A little.  After it opened up a tad I could pick up a little bit of brown sugar along with the aforementioned flavors, but not enough to overpower the funk.

Sadly, this beer was too Jolly Pumpkin-y.  If you didn’t tell me what it was and handed me a glass I would like it, no doubt.  If I wasn’t expecting pumpkin and Fall spices I would be in heaven with this JP offering.  But this was meant to be a pumpkin beer and it just doesn’t work as one.