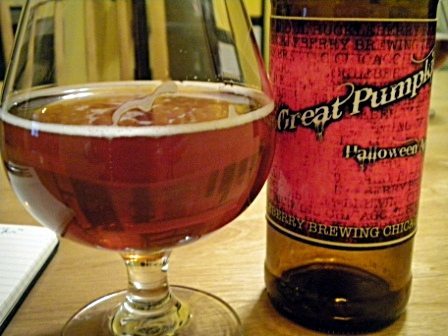 “This is an all grain Hazelnut-Vanilla Pumpkin Ale with a dash of graham cracker. It sat in the primary for four weeks, secondary for two and keg aged for one month.”

Ryan: I met the guy behind this beer, Mike, a few years ago.  Mike lives down the street from me, but may be better known as the man behind the great beers you find at Cooper’s in Chicago.  My then girlfriend, now wife, and I would pop in to Coopers on a regular basis for dinner and he and I would talk beer.  Every so often he’d let it slip that he homebrews.  When he first mentioned it – and no offense Mike – but I figured he threw together a pale ale here and a porter there.  But then he started talking about his kegging system, how he bottles his beers directly from the keg and the pumpkin ale and Christmas beer he was working on.  This guy wasn’t messing around.

So, I mentioned to Mike that we were doing a pumpkin beer tasting and would love to sample his fall offering.  A few days later he was at my door with a small box of beer.

For starters, I love the label on this beer.  Although, that may be because I didn’t expect one and assumed it would come with a post-it note that read, “pumpkin beer.”  Crack the top and you are immediately hit with the sweet scent of hazelnut and vanilla.  It kind of reminds me of a fancy coffee creamer.

Take a sip and you get smooth waves of hazelnut, vanilla and a little graham cracker.  While there isn’t pumpkin in this beer, the flavors come together very well to give you the pumpkin experience.  As it warms I picked up a little cinnamon in the nose and on the palate.  While I thought this beer was outstanding, Mike tells me it will get even better.  When he dropped it off he said it was a, “little green.”  So we’ll revisit it in about three weeks and so

Up until now I only knew of people that could brew some really awesome beer at their house.  Now, I actually know one.  This was a fantastic pumpkin beer and ranked right up their with the Southern Tier Pumking, Dogfish Head Punkin and Heavy Seas Greater Pumpkin.

Karl: This homebrew from Ryan’s buddy Mike raises a lot of good questions, which can only be answered by the bigger brewers.  For starters – why can’t a bigger microbrewer make a pumpkin beer this good?  We’re getting a little ahead of ourselves, however, so let’s start at the beginning.  This hazelnut-vanilla-pumpkin made a lot of promises just in the description, as I am an established sucker for anything combining vanilla and beer.  Thankfully, it lives up to ‘em.

This brew has a huge nose of the hazelnut and vanilla, leaving the pumpkin in the background, less prominent but not invisible.  Or, in-smellable, as the case may be.  The taste of the hazelnut pairs magically with the pumpkin, and I would highly recommend further exploration of this flavor combination by…everyone.  It’s good.  And it works.  Again, this beer isn’t super-pumpkinny but works well enough with all the other flavors, and eventually merged in my head to combine in a big caramel flavor on the finish with a nice, creamy body.

Then – as is appropriate for a Halloween ale – the flavor quite simply disappears.  It falls off the palate and is just gone….almost like a ghost.  (Boo.)

With easily 2x or even 3x the flavor of some of the other beers we’ve sampled, I had to wonder – is the cost prohibitive for a bigger brewer to include this much in a beer?  I couldn’t think of another brewer using hazelnut until Ryan reminded me of Rogue’s Hazelnut Brown Nectar, but there is a hell of a lot going on in here and I have to to imagine that it takes a lot of product to produce that kind of flavor.  If that’s the case, then befriend a homebrewer quick and steal this recipe.  I’ll finish with the last line in my notes:  “Yes please.  More.  Now.  Yes.”