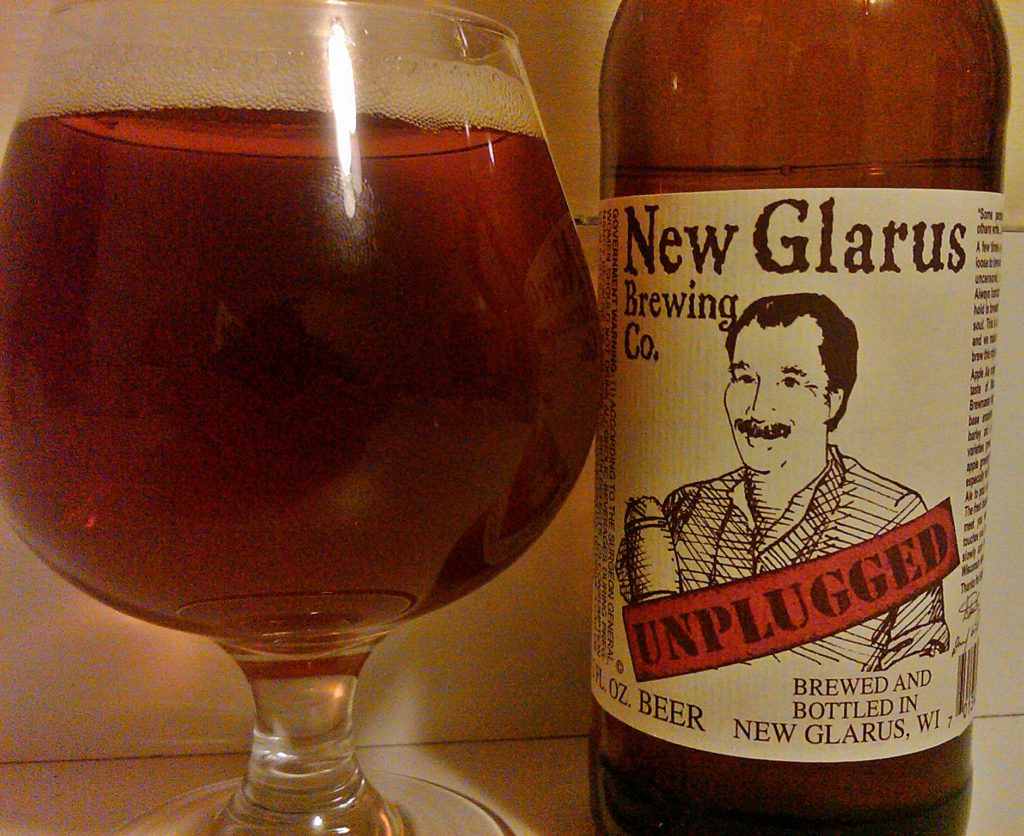 “Apple Ale sings with the fresh crisp taste of Wisconsin Apples. Our Brewmaster begins with a brown ale base employing Wisconsin farmed barley and a blend of apple varieties grown in Gays Mills. Our apple growing friends squeeze them especially for this brew. Expect this Ale to pour a beautiful copper color. The fresh bouquet of Apple will rise to meet you even before the glass touches your lips. So be sure to sip slowly and enjoy the fruits of a Wisconsin harvest.”


It’s no secret that we have a unrequited love for New Glarus’ Unplugged series of beers.  We have fawned over the likes of the Berliner Weiss and the Enigma.  It’s hard not to love and appreciate what this Wisconsin brewery is able to do with fruit in beer.  The Unplugged Apple Ale is another, in a long line of New Glarus offerings, that take the fruit beer to a whole new level.

Pouring a translucent amber in color the Apple Ale offers a thin, off-white head that billows and fades leaving behind a bit of sticky lacing along the sides of the glass.  Get your nose in there and you’ll encounter what appears to be a very one-note beer.  Apple juice.  That’s about all you get in the aroma.  There are no real undertones or pealing back the layers of this one.  It smells like you just opened a bottle of Juicy Juice.  Take a sip though and find something far more complex.  For starters, the carbonation is very sparkling and is reminiscent of the aforementioned Enigma.   And while the apples hit you first there is a nice bit of brown sugar sweetness that follows suit rather quickly.  In fact, this reminds me of a dessert my grandmother used to make when I was a kid; baked apples with brown sugar.  It was a nice, sweet treat – apples baked in the oven covered lightly with butter and brown sugar – and this beer reminds of that…sans butter, of course.

This was an unexpected treat from New Glarus.  I anticipated this beer would be one note and all apples but using the brown ale as a base for this beer provided a nice balance of sweetness to go along with the apple crispness.